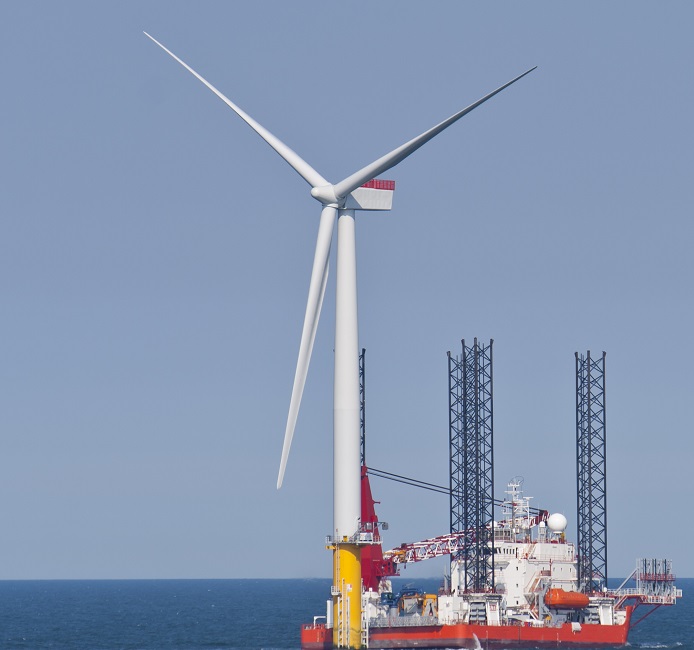 Siemens Gamesa and Vattenfall have signed an agreement for the supply of 72 direct drive 8 MW turbines, the company said. The turbines are scheduled to be installed in February 2021 and commissioned by the end of that year.

Falling costs and competitive tenders are spurring intense price competition in the European offshore wind market. The average lifetime revenue for the Kriegers Flak project in Denmark is forecast to be 20% lower than the record-low bid price and reflects falling CAPEX and cost of equity in the growing offshore wind market, Tom Harries, Wind Energy Analyst at BNEF, told the 2016 Offshore Wind Europe conference.

European offshore tender prices in US $ 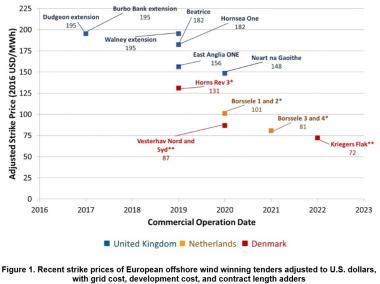 Larger, more efficient turbines have been a key driver of lower installation and operations costs.

Earlier this year Orsted (previously named Dong Energy) was the first developer to install 8 MW turbines on its Burbo Bank Extension wind farm off the coast of Liverpool. Siemens Gamesa’s 8 MW turbines have a rotor diameter of 167 meters. The blades provide an 18% larger swept area and up to 20% higher annual energy production than the previous 7 MW turbine designs, according to the company.

Siemens Gamesa and Vattenfall have already collaborated on several wind power plants, including the 288 MW DanTysk and 288 MW Sandbank projects in the German North Sea and the 110 MW Lillgrund project in Swedish waters.

The 58-metre ship can house 36 people for up to two weeks at sea. The vessel is outfitted with the latest energy and fuel optimisation technology and is equipped with three safe transfer boats designed for safe and efficient transfer of personnel from the ‘Esvagt Mercator’ to the wind turbines.

The vessel will operate from the Port of Oostende, where MHI Vestas has an O&M base.

The installation of the 100 MW Tesla Powerpack battery (129 MWh) was completed just 63 days after the grid connection-agreement was signed.

In September 2016, a 50-year storm damaged critical infrastructure in South Australia, leaving 1.7 million residents without electricity. Further blackouts occurred in the following summer and the government of South Australia called for proposals to deploy grid-scale energy storage options with a minimum capacity of 100 MW.

“The ability to dispatch into the system when needed, also opens up the opportunity for Hornsdale Power Reserve to sign competitive long-term contracts with medium-sized business directly,” the South Australia government said.

Kennedy Phase I will use 43 MW of Vestas 3.6 MW wind turbines, 15 MW of solar capacity and 2 MW (4 MWh) of lithium-ion battery storage. A Vestas-customized control system will be used to operate the hybrid power plant.

A consortium of Vestas and Quanta Services will deliver the engineering, procurement and construction (EPC) for the project. Vestas will also supply a 15-year service agreement, which includes a full-scope service package for the wind turbines and scheduled maintenance for the solar panels, battery storage and electrical systems, it said.

To support further growth, the project partners will share knowledge and experience gained from building the Kennedy Phase I plant with the Australian Renewable Energy Agency, Vestas said.