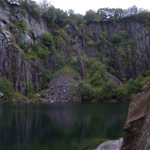 Quarry Battery is developer of the £160 million ($249.2 million) Glyn Rhonwy pumped hydro facility in Wales which will be the UK’s first grid-scale electricity storage facility for decades.

However, the UK needs to provide more support to energy storage projects to mirror development in other markets such as the US, he said.

Without storage, wind operators are powerless to stop the energy that is produced during off-peak hours going to waste, Holmes said.

“If you are a wind farm operator, you are continuously caught by imbalance payments as it is impossible to predict how windy it will be,” he said.

The wind energy can be transferred into Pumped Hydro Energy Storage (PHES) to produce electricity later, when it is needed.

Ofgem’s latest cash-out price mechanisms could see imbalance penalties of as much as £6,000 per MWh.

“PHES is not just a wonderful trading tool; it is also an insurance policy,” said Holmes.

The pull of the hills

Quarry Battery's system will pump water to a reservoir on the upper slope of Cefn-Du, near Llanberis, at times of low electricity demand. The water will then be released back through turbines to a lower reservoir to re-generate the electricity at times of high demand.

The facility, set to be operational by 2019, will achieve carbon payback within six to nine months.

The facility is to operate for 125 years and Gwynedd Council will receive annual rates payments of about £600,000. In addition, an independent trust will manage community contributions from the facility, including an initial grant of £325,000 and annual payments of £15,000.

QBC Chairman Peter Taylor said PHES has shown its value but the company sees a future where the UK incorporates different storage technologies at different layers in the system.

QBC estimated in a recent study that building 10 GW of pumped hydro storage facilities in the UK will save some £3.5 billion a year in national grid costs.

By 2020 Britain will be throwing away up to 27% of its wind power output with a wind capacity of 30 GW, according to Imperial College London (ICL). Energy storage will enable Britain to cut waste to just 7%, lessening the need for contentious constraint payments.

“Each new GW of storage will displace at least one GW of future offshore wind – at less than half the cost,” said the Quarry Battery Company report. Offshore wind is a major growth area for the UK.

PHES costs about £1.5 billion per GW and Offshore Wind costs £3 billion per GW, according to the company’s knowledge of UK PHES sites, Holmes said.

The annualised figures account for project risk and expected life, in addition to capital expenditure.

Assumptions include a 25 year lifetime for offshore wind farms and a 10.5% weighted average cost of capital (WACC).

According to ICL’s report: Strategic Assessment of the Role and Value of Energy Storage Systems in the UK Low Carbon Energy Future, the potential system savings increase markedly as the UK’s energy system decarbonises towards 2050.

In Figure E3 the annual system benefits are given in £ billion per year, for a range of assumed energy storage costs (top horizontal axis) also corresponding to different optimal volumes of energy storage (bottom horizontal axis). These results are presented for storage with 75% efficiency and 6 hours duration.

Net system savings increase radically between 2020 and 2050, given an assumed growth in intermittent renewable generation and electricity demand.

For instance, in the case of bulk storage, with a cost of £50/kW per year, the achievable net annual system benefits are £120 million in 2020, rising to £2 billion in 2030 and £10 billion in 2050. Similar trends are observed for distributed storage.

Source: Strategic Assessment of the Role and Value of Energy Storage Systems in the UK Low Carbon Energy Future

“There are already success stories in America, where companies such as RES and AES have installed innovative storage technology,” said Frank Gordon, a Senior Policy Analyst at the UK Renewable Energy Association who specialises in energy storage.

These, if applied more widely, could go a long way to benefitting the UK energy system, but the UK must address certain barriers which are delaying growth in mass deployment, Gordon added.

The UK does not have an agreed definition of energy storage or technical standards for installing and using storage systems.

At the same time, current rules governing grid operators must be changed to allow them to install energy storage technology, Gordon said.

The Government needs to shift from viewing energy storage as another Research and Development project to viewing storage as technology worthy of additional resourcing from DECC, the government’s energy department.

“It is only through measures such as these that storage will progress from being technology with ‘high-potential’ to ‘technology which revolutionises our energy mix,” he said.

According to QBC’s Holmes, successive UK governments have ignored the potential of pumped hydro storage, choosing instead to use CO2-producing diesel generators and gas power stations as backup.

“As a result, electricity consumers pay three times over – pay to build renewables, pay operators to curtail or throw away potential generation when there is too much electricity and pay to keep fossil-fuelled generation in reserve,” he said.

Pumped hydro is viewed by many as a technology that can provide big savings and additional power production capacity and also fast reaction storage at grid-level.

Other technologies at distribution network substations and even domestic storage can also play a major part in reducing costs and improving efficiency.

State support will be needed to facilitate growth in energy storage systems such as pumped hydro and if this comes, companies with this expertise will be well placed to participate in the next phase of electricity supply.