The existing fleet of turbine and foundation installation vessels is well suited to serve the European offshore wind market in the short and mid-term but it will not be sufficient to support installation demand after 2020, Michael Guldbrandtsen, senior consultant at MAKE Consulting, told Wind Energy Update. 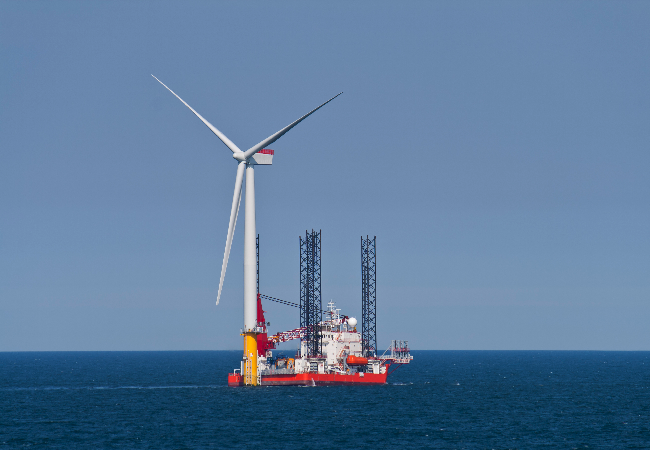 Considering the available vessels in the market and their crane sizes, the installation of conventional monopile foundations using jack-up vessels is currently limited to a depth of 35-40 meters for 8 MW turbines and up to 45-50 meters for 3.3 MW turbines, according to Wind Energy Update’s Offshore Foundations & Supporting Structures Report 2015.

Close to half of the available jack-up vessels are not capable of installing monopiles supporting 8 MW turbines and then, only up to a depth of 30 meters, when using 3.3 MW turbines, according to the report.

Less than 10 of the newest generation of vessels capable of installing 8 MW turbines are currently in the market, but growing foundation sizes mean that moving forward some of the biggest of these vessels will primarily be used for installing foundations, according to Guldbrandtsen.

None of the existing vessels are large enough to support turbine ratings beyond 10 MW, he said.

As developers look to build projects in deeper waters and farther from shore, the availability of the right type of vessels could be one of the main risks for projects. According to John Oosthoek, market- and business intelligence manager at Royal IHC, failing to adapt vessels on time to match the new demands of offshore wind projects could be one of the main drivers of cost escalation or delays in the sector.

Controlling vessel costs and availability will be key to offshore wind project developers as they are competing in contested tenders and are looking to continue to drive down the cost of offshore wind.

Investments in new vessels and equipment are highly affected by the clarity in the market, and the long-term share for vessel types will depend on future foundation and turbine sizes and designs, and their installation methods.

Total installed offshore wind capacity in Europe now stands at about 11.5 GW and is projected to grow to around 20 GW by 2020, according to trade body WindEurope (MAKE Consulting forecasts cumulative offshore wind capacity to reach 25 GW by 2020). Installations are expected to pick up in 2017-2019 after a slower 2016, but there is significant uncertainty over future volumes and regulation in many key markets after 2020.

Given the projected growth in the offshore wind energy market over the next 7-10 years, it is likely that the European turbine and foundation installation fleet will include a mix of specifically-built vessels and modifications of existing ones.

Most of the purpose-built jack-up installation vessels were delivered between 2010 and 2015, and currently there’s only one new vessel in the pipeline for the offshore construction industry.

The wind turbine installation (WTI) fleet grew at a CAGR of 11% over 2005-2014, according to a Clarksons study published at the end of 2015. A peak in WTI vessel orders in 2010 following a third licensing round in the U.K. resulted in a record number of 10 units entering the fleet in 2012. Currently, there are 33 WTI vessels active globally. Based on an average demand for the next five years converging around 38 WTIs, at least one additional WTI per year will be required, according to Oosthoek.

As wind farms move further from shore into rougher waters, the requirement for larger vessels is likely to increase.

The average size of wind turbines installed in Europe in the first half of 2016 was 4.8 MW, a 15% increase year on year, according to a WindEurope report published in July, and are expected to continue to grow in size.

DONG Energy said during its Q2 earnings call on August 4 that it plans to deploy turbines of 7-8 MW and above after 2020 compared to its current fleet of 2-3.6 MW on average for the six projects in its pre-2020 build-out plan.

“It’s not so much the number of vessels but the types of vessels,” said Martine Hoenderop, business development manager at Jumbo Maritime in the Netherlands.

The new standards for cranes at turbine installation vessels are currently around 900-1,500 tons (t), compared to around 800 t on average in the 2010 crane fleet, according to Frederik Colban-Andersen, senior broker, Offshore Renewables at Clarksons Platou Offshore.

A2SEA and Fred Olsen Wind Carrier have both upgraded their crane fleet to 900 t to be able to support the installation of the current and next breed of turbines going up. Van Oord is also reportedly upgrading its crane sizes as well, and Boskalis is considering converting some of its vessels.

With monopile foundations growing in size and weight and companies looking at other foundation types such as jackets, the 800-900 t crane vessels are no longer ideal for those installation jobs and increasingly require 1,200-1,500 t crane installation vessels, Colban-Andersen said.

Examples include the recently commissioned Seajacks Scylla – which features 105-meter long legs, a 1500t leg-encircling crane, 5,000 square meters of deck space and 8,800t of variable load limit – as well as some of Seaway Heavy Lifting's monohull crane vessels such as Oleg Strashnov and Stanislav Yudin, among others, according to Colban-Andersen.

The biggest monopile foundation on the market today is around 1,200 t, which makes 1,300 t cranes almost outdated already, according to Hoenderop. She expects crane sizes of 1,800 t to be the norm by decade’s end.

Growing equipment requirements are also prompting heavy-lift vessel providers to convert their fleet to fit the future needs of the offshore wind sector.

Jumbo plans to convert its dual-crane heavy-lift vessel Fairplayer with with higher cranes and a larger deck of up t,o 4500 square meters to allow it to install jackets in addition to installing pre-piles and TPs. The upgraded vessel is scheduled to set sail in Q1 2018, Hoenderop said.