Offshore wind, which is rapidly evolving and scaling in response to harsh environments, makes repowering a complex decision, especially without energy policies and incentives set in place. 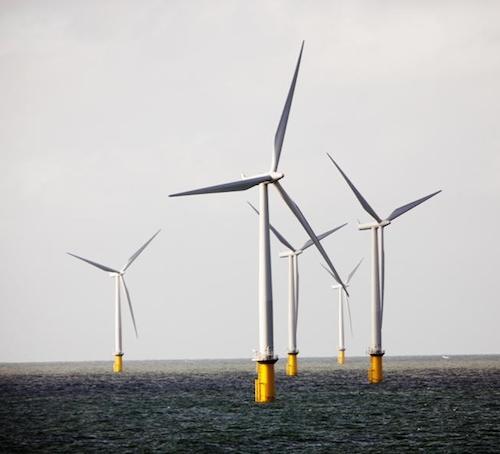 The decision to scrap or repower would depend on a known unknown: what incentives will future governments offer? Photo Credit: Dong Energy

Engineers design turbines for a specific lifespan and have to prove that components will not fail within that time. The agreed 20-year design lifetime means engineers can design to meet one consistent requirement, ensuring that new components can be guaranteed to work reliably and be insured for that period.

What should wind farm operators do when that lifetime is up?

For wind farms onshore, it may be cost-effective to simply replace nacelles and blades at the end of a 20-year design life, for about 15 to 20 percent of the cost of a new turbine. Because of space constraints and permitting expense, reusing the same wind farm area and layout makes sense, and turbine size cannot scale up much more for future land based turbines, for social reasons.

Offshore wind is trickier, and complicating factors limit the potential for repowering. The offshore wind of today is so different from the earliest wind farms that models of lifespan are all there is to go on.

”It's not quite clear how long turbines would last,” says Taylor Roark, an experienced senior offshore wind consultant at TÜV SÜD PMSS. “We haven't seen projects reach more than ten to twelve years. We haven't decommissioned projects yet. So you’ve got this assumption of a 20-year lifespan based on loads that a turbine is going to take over a set period of time - but it's all based on assumptions.”

While engineering sets a 20-year life for nacelles and blades, other aspects have potentially greater longevity, from intangibles such as permits and leases, to towers, foundations, cables and substations.

The UK represents about 60% of all offshore wind, and its leases have built-in longevity. Permitting is quite expensive, so not having to move at the end of 20 years is a plus.

“The Crown Estate gives leases on the seabed for 40 or 50 years generally in Round 2 and 3 sites. So under the current planning regime you kind of have pre-dealt with that issue,” says Roark. “The idea was that there would be an opportunity to keep projects going or to repower or whatever would be appropriate,” he says.

Most towers have been engineered for a 40 or 50 year life so it is likely that those structures will stand for that period of time.

Monopile foundations use a lot of steel; 100 metres above water, 30 metres under the water and 30 metres into the seabed, for example. It would surely be tempting to replace the business end on top, to get the maximum out of what has been invested below the surface.

But marrying a new nacelle and blade from 2035 with an old tower and foundation from 2010 might not be so easy.

“Trying to reuse a foundation with that difference in the nacelle or turbine would be very difficult because the people who provided the foundation design and the initial tower would say that while we provided this for the turbine of the time, we are not going to guarantee or warrant the use of this with a different technology,” Roark explains.

So the longevity of foundations and towers does not guarantee that you could replace the nacelles and blades on top.

But one issue that repowering could resolve is a potential point of failure; the single set of export cables. So keeping the old cabling when adding new cables would provide a layer of insurance.

“You might stay in the same area, or use it as a relay out to some of the larger projects you have on the Round Two projects,” he says. “If you have a substation platform you might reuse that and keep the cables buried to use for redundancy.”

But you might not prefer the same area in 2035. Offshore sites are literally moving. The industry can now operate better further out in deeper water.

Roark believes floating platforms will surpass both bucket and monopile foundations to become the offshore foundation of the future.

While Denmark and the UK were first to take their little onshore wind farms offshore, beckoned by the shallow water in the north sea, the next step; floating platforms, will be developed because Spain, Portugal, France and Japan have no choice but to operate in much deeper water.

“I think it's going to be faster growth than the UK, because the UK basically made a commitment to the offshore wind that it created, but it didn't really look at the floating piece,” says Alla Weinstein, CEO of Principle Power, maker of the WindFloat floating platform.

Floating platforms offer much more scalability and flexibility and use much less steel. Any size turbine can be accommodated, at any site. “It's just a matter of getting as good of data as you can for a specific location that you're going to install; and use those design tools to do careful and methodical design,” she says.

The decision to scrap or repower would depend on a known unknown: what incentives will future governments offer?

“We don't know what the legislative regimes and support mechanisms are going to be in the 20 years’ time when projects start to come out all of their original design and feed-in tariff and renewable obligations,” explains Roark.

One reason that the US has not been able to develop an offshore wind industry is the lack of policy certainty. Would Europe be able to extend the useful life of wind farms by extending that certainty longer?

“But in the next couple of years, we’ll have to start thinking beyond 2020, because projects take a long time to develop. The whole purpose of the government policy is to provide security and stability for investors, but in the meantime it’s a good foundation on which to invest,” he says.

Depending on unknown factors now, repowering may not make economic sense at that future time. With the first 15 years of offshore wind generating data on wear and tear, you'll be able to look at trends across that time and extrapolate the probability for fatigue. But again, it will come down to the incentive regime at that time.

The question will be: Is it worth me spending $1m for example to replace this set of bearings or pieces of equipment if I'm going to get only $1.5m in revenue under a new regime?

Another unknown is future owners’ interests. Where a developer might not see the scrap value of copper in old cables, the trend is towards larger and larger financial structures, and a bank that knows nothing about developing projects, and owns the farm in 20 years, might.

At a certain point, offshore turbine design will stabilise, reach maximum height and optimum design. The big corporate OEMs including Siemens, Vestas and GE will have refined the engineering that originated with more haphazard beginnings on Danish farmland.

Once the engineering stabilises, as it has in more established industries, it is likely that old offshore wind farms will become more recyclable. But for now, for the rapidly evolving offshore wind industry, there are too many unknowns for it to be a certain prediction.

That is why dialogue about a ‘beyond 2020’ energy policy foundation in active offshore wind markets should be under discussion at the very least starting in 2015. Because as everyone knows, time flies and 2020 will be here before we know it, with the same questions remaining unanswered, which is not advantageous for the wind sector or its investors.