Offshore wind farms are increasingly extending their vertical and horizontal reach, but are shipbuilders adapting their vessels’ capacities and capabilities to accommodate these changes? 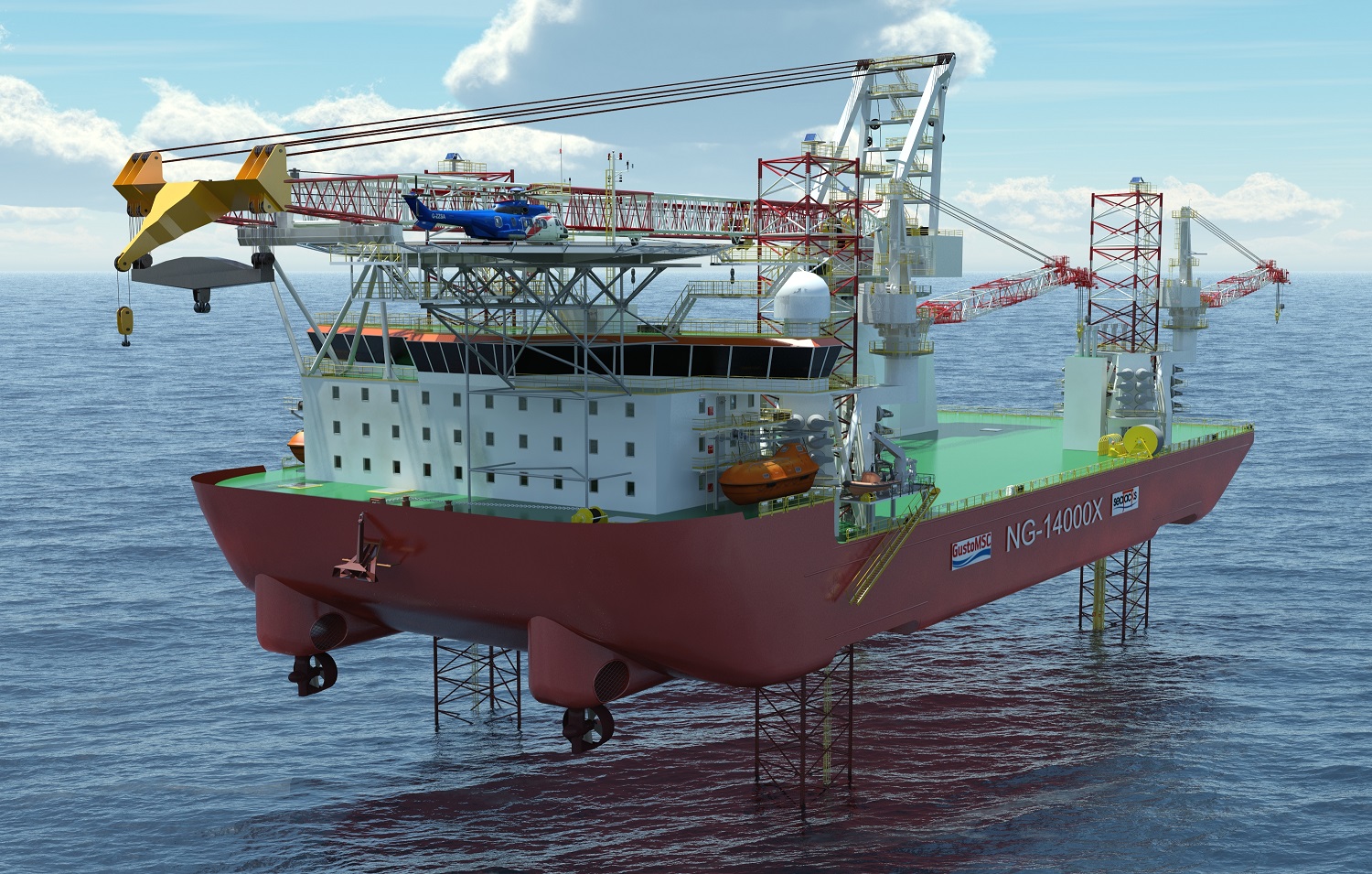 UK-based Seajacks contracted the South Korean shipbuilder to construct “Scylla” specifically to meet the demands of working in UK Round 3, Scottish territorial waters, and other North-West European markets.

As offshore wind farms move into deeper, harsher locations and further beyond the 20:20 radius (20m water depth and 20 km from the shore), foundations and wind turbines are becoming higher and heavier.

The 600 MW Dutch Gemini offshore wind farm, for example, will be built 85km from Groningen, north of the Netherlands, in an area with water depths between 28 and 36 metres. The project will use 150 Siemens wind turbines, each with a capacity of 4 MW, and a 130-meter rotor weighing approximately 100 tons.

With production due to start in 2017, Gemini signed a EUR 1.3bn EPC contract with Van Oord for the complete supply and installation of the foundations and electrical infrastructure.

Van Oord, in turn, will be deploying Aeolus – an offshore Wind Farm Installation Vessel (WFIV) that will be ready by mid-2014, and which has been purposefully fitted with a crane capable of hoisting 900 tonnes at 30 metre radius. The weight of project components, however, is not the only challenge to finding the correct or optimal vessel size.

“Weight is not such an issue for turbine installation, as they can be split into several pieces,” explains Vincent Cliquet, offshore project engineer at Innosea, a French engineering company specialised in marine renewable energy, including fixed and floating wind turbines.

“However, the nacelle height can be limiting for the vessel, as foundation and tower height can easily reach 160 metres, which means jack-up legs and crane height must be as high at the required radius,” Cliquet tells Wind Energy Update.

For the foundations, he says, height can be an issue if the construction vessel is lifting the foundation from its own deck as is sometimes the case. “Weight is also critical, as jackets can reach 700 tons with another 150 tons for the transition piece”.

According to Cliquet, the most critical parameters in WFIVs – which are mainly jack-ups used for piling and installation of foundations and turbines – are the jack-up legs’ height (significant air-gap once jacked is required by standards); crane capacity and radius of the crane, and crane height.

Like Generation II, these jack-up barges typically have a high lifting capacity, high-deck load capacity, a large working deck capacity, a helicopter deck and are self-elevating. They also have propulsion with DP2/DP3 capability, which significantly reduces the time for transferring foundations, towers, turbines and blades from the transportation to the installation barge.

An example of a Generation III vessel is the Pacific Orca – the largest WFIV built to date. Designed by GL Group, constructed by Samsung Heavy Industries (SHI) and owned by Swire Pacific Offshore, the 161-metre self-propelled vessel was built in 2012 for use in the offshore wind market.

The vessel has a carrying and installation capability of up to 12 wind turbine generators, each rated at 3.6 MW, and can install components in water depths of up to 60m – and with leg extensions up to 75m.

Pacific Orca is now being utilised by Denmark’s DONG Energy, which recently used it to install the first monopile on its 277 MW Borkum Riffgrund 1 Wind Farm being constructed 37 km off Germany’s northwest coast.

But the record will soon be surpassed. A larger WTIS is already under construction, also by SHI. UK-based Seajacks contracted the South Korean shipbuilder to construct “Scylla” specifically to meet the demands of working in UK Round 3, Scottish territorial waters, and other North-West European markets.

“Drawing on our extensive experience, and based on feedback from discussions with clients across the supply chain, the design of Seajacks Scylla has been developed to meet the installation needs of jumbo-monopiles, jackets and turbines of future wind farms in deeper waters and further from shore,” says Blair Ainslie, CEO of Seajacks Group.

Sailing at speeds of 12 knots or higher, Scylla will be equipped with 105 metre long legs – nearly double that of Pacific Orca – and will have the ability to install components in water depths of up to 65m.

Yet larger in the world of vessels does not necessarily equate to superior performance.

“For some time, the thinking has been that ‘bigger is better’, substantiated by less weather-sensitive and more deck space. I think the industry has reached – or is very close to reaching – the point where that philosophy does not hold water any longer,” says Ole Bigum Nielsen, director of offshore project execution at Sweden’s state-owned power giant Vattenfall, whose extensive portfolio includes three offshore wind farms and two offshore wind projects.

“Bigger vessels also mean higher day rates,” Nielsen adds. “The higher day rate has to be compensated by higher efficiency; otherwise there is no business case. The question is whether the industry has seen improved efficiency – I doubt it”.

Massive cost reductions are needed on all levels in offshore wind farms, he says, and vessels have to contribute to that, which will not happen by “going bigger and bigger”.

And while there’s been a widespread misperception in the past that the availability of suitable vessels in the market would create a bottleneck for the offshore wind industry, Nielsen states that this has not been the case.

“In general, I think there are sufficient vessels in the market. We even have seen vessels leaving renewables and turning back to oil and gas,” he notes, adding that the more vessels there are, the better, as this leads to healthy competition.

Offshore wind farming is evidently broadening its scope, in both depth and distance; thus ship suppliers will need to factor in the various demands of upcoming projects without adding excessive weight or cost to the vessels – a challenging task which continues to be explored.