Grease Thief is currently monitoring over 1,000 turbines at more than 80 wind farms. Rich Wurzbach, president of MRG Labs and inventor of the Grease Thief, recently took some time to update us on the progress of Grease Thief. 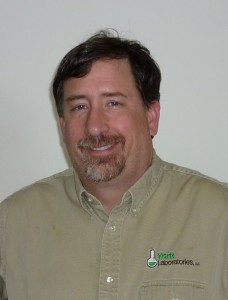 “There is a wind turbine sampling kit that includes the individual tools required. The sampling is usually done in conjunction with a scheduled up-tower climb…We call it blood work for machinery,” Rich Wurzbach, president of MRG Labs and inventor of...

Collecting grease samples has never been an easy task for wind farm operators, who are generally forced into time-consuming and expensive machinery disassembly in order to collect samples. Often, these samples are not representative of lubrication conditions and limit the value of grease analysis.

MRG says it has simplified this issue by developing the Grease Thief and Grease Thief Analyzer. What makes the design unique, says the company, is that the two products allow comprehensive analysis to be performed with less than two grams of grease.

Grease analysis is now an integral part of complete monitoring of industrial equipment. We speak to Rich Wurzbach, president of MRG Labs and inventor of the Grease Thief, to get more on the nitty gritty of this O&M ‘must have’.

Q: How did you define the wind turbine market as a viable market for Grease Thief?

A: Our background is in the nuclear power industry. We develop technologies to sample and analyze greases. We met some folks from Dong Energy and Vattenfall during a visit to Germany for an international lubrication conference in 2011. They were active in the offshore wind industry in Northern Europe, and asked us about our equipment. At the time, we were not aware that there was a problem we could solve in the wind sector.

Q: What is the ultimate goal of Grease Thief?

A: The goal is for operators to detect underlying causes of bearing degradation so that the causes can be addressed proactively. With accurate grease samples you can detect bearing issues early in the process so that repairs can be done up-tower when possible without bringing in cranes. It also helps to find problems early before secondary damage occurs.

Q: Why is it so crucial to have accurate grease samples?

A: Lubricant serves the role of preventing wear and minimizing friction for the components in a wind drive train. Those components include the main bearing, blade bearings and generator bearings. In addition to needing good functioning lubricants to do that successfully, lubricants are also carriers of information. So when analyzed, they can indicate if any contamination is present in the lubricant, which could be water, dirt, the wrong lubricant pumped in that location, and wear particles.

A: Grease Thief is a syringe-like tool, based off the core sampling principle, rather than trying to suck out a sample from the machine. Often grease is in a condition where if you try to apply suction, you get only the softer more liquid portions as your sample, and not a representative sample. So our tool combines this syringe-like tool, combined with a handle, that allows you to insert it into the machine to the depth of interest – where grease is currently active in supplying lubrication to the component and is representative of the current state of wear and damage of the component.

Q: What is your protocol for collecting grease samples to ensure zero contamination?

A: When the sampling device is inserted into a machine, it remains in a closed position until it gets to the location where the sample is to be taken. At that point it is actuated to collect the sample. So it is configured so that contaminants or even grease that is not representative will not be gathered into the container until it is placed in proper position to take the sample. That’s a big difference over some of the traditional solutions that have been out there, where you usually end up with significant grease that is not active and can give you misleading results.

Q: How much grease is collected?

A: The sample is one gram. By reducing the sample quantity to just one gram, you can precisely target the location within the machine that will be representative.

Q: Which turbine components is Grease Thief currently designed for?

A: The majority of our sampling to date has been with main bearings. However, we have a fairly extensive history on blade bearings and generator bearings, and there have been a couple instances of us doing yaw bearings and yaw gears as well. Those are the key components within the drive train; however, the Grease Thief is capable for almost any grease sampling challenge.

Q: Can you provide a couple of examples where this technology is aiding wind farm operators?

A: We have identified grease mixing as an issue at several wind turbines. The problem with grease mixing is it compromises the lubricant, so the oil has a tendency to run out of the bearing and then starve the bearing for lubricant. If you can find that early, it can be flushed out and corrected before damage occurs. Grease Thief has been demonstrated to be a pro-active tool to prevent failure do to grease mixing.

Additionally, we have found instances where new grease has been inadequately protected during storage. This can lead to contaminants in the grease, which leads to damage and abrasive wear in the bearing. By discovering that early, it’s been possible to find and eliminate that grease from the supply chain, and to flush it out of systems before extensive damage occurs to the bearing.

Q: What are the specifics behind Grease Thief?

A: There is a wind turbine sampling kit that includes the individual tools required. The sampling is usually done in conjunction with a scheduled up-tower climb. While that is occurring, the grease kit is used to collect the required samples. It typically involves removing an access plug and the use of a T-handle to allow the proper depth insertion of the Grease Thief to collect the targeted sample. Then the technician puts the sample in a collective container and ships it to a laboratory for analysis. We call it blood work for machinery.

Q: How often does Grease Thief identify a problem?

A: It varies from operator to operator. Some operators or certain OEMs have had known issues, so in some cases there is a high percentage of problems. I’d say on average, 15-20 percent of submitted samples are flagged for follow-up action, which could be re-sampling at another time, comparing with vibration analysis, a directed action to flush grease, or in the worst case, a recommendation for bearing inspection or possible replacement.