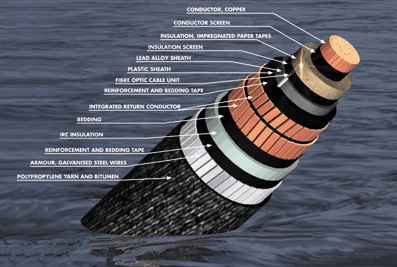 On the other hand, HVDC systems generally require less cabling and have reduced electrical losses.  So, what are the advantages and disadvantages of HVAC and HVDC cabling?  And how does the distance of installations from shore influence the decision to opt for one technology or another?

Battle of the Currents

Modern power systems have developed using AC, rather than DC, largely as a result of a ‘battle’ for dominance that occurred between Thomas Edison and Nikola Tesla, the principal proponents of each technology, at the end of the 19th Century.

HVAC won that battle because of the invention of transformers, which allowed users to simply and efficiently raise and lower AC voltage to reduce losses.  In a nutshell, power = voltage x current and loss = resistance x current squared - so a doubling of voltage equates to just a 25% loss for the same power.

“Hence [it made sense to] raise the voltage for transmission and lower it for safety at [the point of] distribution and supply,” says Joe Corbett, Head of Technical Services at Mainstream Renewable Power.

When offshore wind developers decide between HVAC and HVDC cabling, the overall system must be taken into consideration – including cables and transformers/converters.  According to Olivier Angoulevant, Sales Manager–Wind at Nexans, when HVAC systems are possible they are usually more economically attractive.  For large transmission capacity, several systems can be installed in order to spread the risk in case of damaged connections.  For example, instead of transmitting 500MW, operators can instead transmit along two systems of 250MW each.

“AC or DC is decided on a project per project basis, depending mainly on power to transmit (per system) and length.  HVDC cables are usually cheaper and have very limited losses. However, [the] costs and losses of DC converters are significantly higher than AC transformers,” he explains.

“Depending of the voltage level, AC can be considered up to 200km,” he adds.

For Corbett, although AC transmission is a well known and trusted technology for control and protection, ease of connection, voltage transformation and circuit interruption, it is limited by the amount of reactive power required to energise the circuit - which is larger for underground (or undersea) cables than for overhead lines - making it expensive for high power and long distance.

“So although HVDC converter costs are high - making HVDC expensive for many design situations – as the power and distance increases, it becomes more competitive,” says Corbett.

“The break-even is typically around 800km for overhead and 50km for underground or undersea cables,” he adds.

The upshot is that HVDC Cabling is suitable for the transmission of power over long distances from more remote offshore wind installations, since it has no reactive power requirements – resulting in lower losses.  However, these advantages should be balanced against the fact that HVDC transmission is a new and developing technology, particularly in the area of control and protection of multi-terminal networks.

“[Moreover], there is limited or expensive circuit interruption technology [and] conversion and voltage transformation is expensive,” says Corbett.

In summary, it appears that decisions over whether to opt for HVAC or HVDC for offshore wind installations is highly dependent on a number of factors, particularly the distance of a project from shore.

“Both options are possible.  Nexans has a unique track record with submarine projects up to 525kV for AC and 500kV for DC,” says Angoulevant.

For Corbett, the selection of the most appropriate technology depends solely on the distance from the existing AC network.

One other possible factor is the cost of operations and maintenance (O&M) post-installation.  Angoulevant argues that although both AC and DC submarine cables are basically maintenance free, the maintenance of DC converters may be more intensive than AC transformers.

“The VSC technology for converters is recent whilst AC transformers have a long track record,” he says.

Either way, as highlighted in the recent Wind Energy Update Offshore Wind Construction and Installation Report, the trend towards farshore siting (>60km) may result in a higher incidence of HVDC transmission as the main export-cable link to shore.  Moreover, the increasing complexity of the overall system highlights the critical importance of transmission, both as a significant cost-centre (20-25% of capex) and for revenue (100% dependency), and emphasises the need for a holistic view of electrical transmission systems to be taken at the design-phase of offshore wind farms.