Using drones that follow automated flight paths without the need for a human pilot could allow wind farm project teams to inspect up to twice as many turbines in a day as they can today, experts told Wind Energy Update. 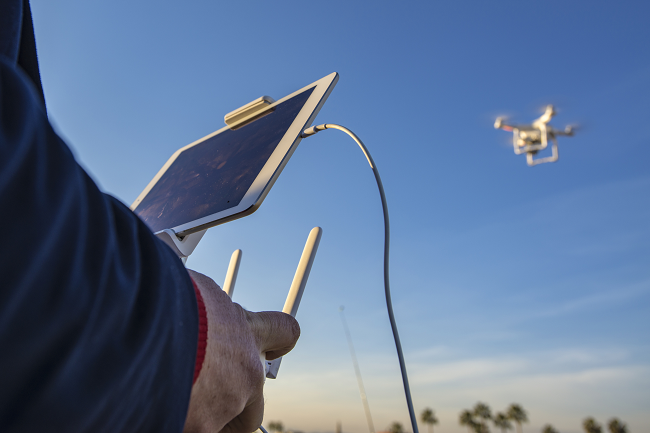 Currently, drone inspections can cover up to 10 or 12 turbines daily, reviewing each blade within anything from four to nine minutes. This compares to a manual inspection rate of two to five turbines a day.

Automation could take this level to up to between 15 and 20 turbines per day, said Chris Bley, chief executive at InspecTools, a company specializing in renewable energy plant inspection technologies.

Automated drones are also expected to cost less than current approaches, although the pricing for automatic drone services has yet to be clarified, said Ariel Avitan, commercial lead for Percepto, a systems developer working on autonomous Unmanned aerial vehicle (UAV) applications.

There are varying estimates of the current cost of drone services. According to Bley, pilot-operated drone inspections in the wind industry could be as little as $300-$500 per turbine, or 20% to 25% of the cost of manual inspections.

However, according to Avitan, “the costs are almost the same” for the two inspection methodologies. A two-person drone team, including a pilot and a data analysis technician, typically costs in the order of $800 per wind turbine, he said.

Meanwhile, the per-turbine cost for manual inspections can range from $3,000 down to €200 ($225) in parts of Eastern Europe, Avitan said.

What is clear is that in the past the lack of an obvious cost advantage for drones led some asset owners to eschew drone and manual inspections in favor of a third inspection technique – using high-definition cameras based on the ground.

EDF Renewable Energy in the U.S., for example, evaluated drone and camera inspections in 2014 and opted for the latter as it didn’t find any drone inspection systems that could provide the user-friendly composite pictures that a camera could for the same cost.

“The decision was for economics and simplicity,” EDF Renewable Energy Technical Adviser Jon Salmon said. “A ground-based system has less complexity: no drone to pilot, maintain and recharge batteries.”

EDF found that a ground-based camera inspection costs about $300-$500 per turbine, including the technician for turbine operations, blade inspection, reporting time and a written report.

Almost all of this cost comes from the labor to operate the camera and the wind turbine, Salmon said.

The equipment comprises a camera with a telephoto lens and a tripod, plus a laptop for image storage and analysis, for a total cost of less than $10,000. Only one camera is needed for all blade inspections.

Nevertheless, Salmon said that developments in drone technology would likely improve the business case for drones in the future.

“Ultimately, if not already, the drone systems will be able to provide lower-cost inspections due to the drone's ability to fly around the blade and provide the full inspection without having to reposition the wind turbine rotor and blade for the camera,” he said.

This will reduce the labor and inspection time significantly, allowing the inspection to be performed by one person.

Drone inspections allow personnel to remain on the ground in all weathers and could reduce downtime because drones can respond fast and are easy to dispatch.

They also provide a higher degree of flexibility since patterns can be easily detected by benchmarking a given turbine’s observation with another proximate turbine for enhanced farm-level blade damage presence.

Percepto is working on a concept whereby wind farm drones will be fully automated, flying out from a weatherproof recharging station whenever the weather conditions are right and carrying out inspections along a pre-programmed flight path.

This could allow wind turbine condition data to be gathered and analyzed every few days instead of every few months, as is the case with manual inspections.

The drones could also carry out additional tasks such as site surveillance for security purposes.

In many situations, drones can already deliver better data on turbine conditions than can be achieved through a manual inspection.

UAVs are able to fly at an optimum distance from the blade, usually from three to 10 meters, and can circle around it to cover the whole surface area.

This data can be automatically meta-tagged and used to build a three-dimensional model of the blade, delivering a level of accuracy and detail that is hard to achieve with manual methods.

The only safety concern associated with UAVs is that one might fall out of the sky and hit someone below, which is highly unlikely given the level of redundancy seen in the drones now used across the wind industry.

InspecTools, for example, flies drones that have eight rotors and can continue airborne with seven.

Recent changes in regulation could also spur the use of drones for wind farm inspections.

Drones in the U.S. are currently required to fly within the visual line of site of the operator, which limits the range of flight to 305-610 meters (about 1,000-2,000 feet) on average, depending on how large the drone is.

On August 29, the U.S. Federal Aviation Administration (FAA) officially permitted commercial flights of drones weighing less than 55 pounds (25 kilograms), flying during daytime at a maximum speed of 100 miles per hour (about 160 kilometers per hour) and at a maximum altitude of 400 feet (about 122 meters) above ground level (or, if higher than that, remain within 400 feet of a structure), and as long as they remain within the line of sight of the operator.

Previously, drones were not allowed to exceed 400 feet in altitude. The changes mean that even though some wind farms may be too big for drones to remain within the line of sight of the operator, drones can still be operated on a 500-foot turbine, for example.

The new rules also open up a process to waive some of the rule’s restrictions if an operator demonstrates the proposed flight will be conducted safely under a waiver.

They also eliminate the once-required FAA pilot’s license to fly a commercial drone and replace it with certificate, which is easier to obtain.

This could reduce the costs to get licensed for drone operation and increase operational flexibility for owners that want to use drones for O&M.