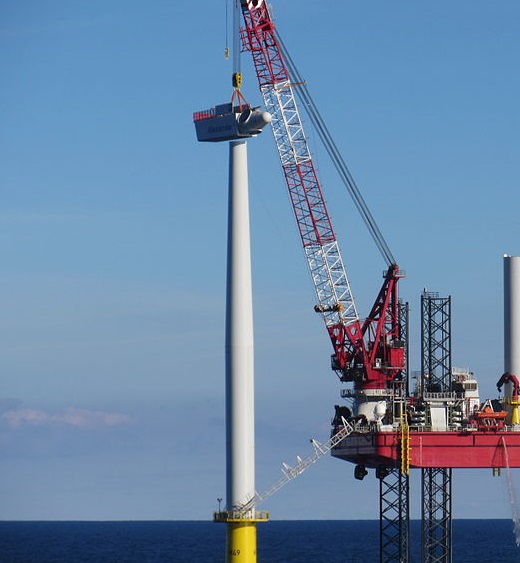 Europe installed a record 3.6 GW of offshore wind capacity in 2019, led by continuing growth in the dominant UK and German markets, industry association WindEurope said in its annual market report published February 6. Installations were 33% higher than in 2018 and 16% higher than in 2017, the previous record year.

UK cumulative offshore wind capacity climbed to 9.9 GW at the end of 2019, while Germany's installed capacity rose to 7.4 GW. Denmark is currently in third place, with a total capacity of 1.7 GW. 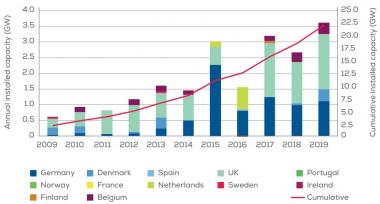 Offshore developers are deploying larger wind turbines and projects to drive down costs. The average capacity of new installed turbines rose to 7.8 MW in 2019 while the average wind farm capacity climbed to over 600 MW.

Some 6 billion euros ($6.5 billion) of investments were agreed for four new offshore wind farms in 2019, representing a total capacity of 1.4 GW, WindEurope said.

To meet these objectives, European Union (EU) policymakers must set out a framework for expanded offshore and onshore grid connections and improved maritime planning, it said.

Spain installed 2.3 GW of onshore wind in 2019, the highest in Europe, WindEurope said in its annual market report published February 6.

In total, Europe installed 11.8 GW of onshore wind, an improvement on 2018, but far short of the growth required to meet its 2050 decarbonization targets, it said.

Spain bounced back from low levels of activity to hit its highest installation level since 2009.

"Most of the installed capacity was awarded in the 2016 and 2017 auctions, when more than 4 GW of wind energy projects won. The remaining capacity from those auctions should be connected in 2020," WindEurope said.

Onshore wind activity in Germany remained muted at only 1.1 GW of new capacity, the lowest level in the country since 2000.

Germany’s onshore installations have fallen sharply in the last two years, mainly due to complex and lengthy permitting processes.

"Most of Germany’s new onshore wind auctions in 2019 were undersubscribed because there weren’t enough permitted projects," WindEurope noted.

"Out of the 3.7 GW of auctioned capacity, only 1.8 GW was awarded. So onshore installations are unlikely to pick up much in the short term," it said.

The 800 MW Mayflower Wind offshore wind project in Massachusetts is to sell power to local utilities at a record-low price of $58/MWh, according to documents filed by the Massachusetts government to the Department of Public Utilities.

Jointly owned by oil major Shell and European utility EDPR, Mayflower wind will be located 20 miles south of Nantucket and is due online in 2025.

The price of the 20-year power purchase agreements (PPAs) is lower than the $65/MWh agreed by Avangrid Renewables and Copenhagen Infrastructure Partners for their joint 800 MW Vineyard Wind 1 project in Massachusetts, the U.S.' first large-scale offshore wind farm.

The alternative cost of sourcing wholesale power and renewable energy certificates (RECs) over the full term of the Mayflower contract was estimated at $84/MWh, the government noted in its filing.

"While we need to analyze what a longer permitting timeline will mean for beginning construction, commercial operation in 2022 is no longer expected," Vineyard Wind said in a statement.

"We look forward to the clarity that will come with a final EIS so that Vineyard Wind can deliver this project to Massachusetts and kick off the new U.S. offshore energy industry,” it said.