Eradicating blade downtime a storm at a time

Experts say that it might be possible to temporarily slow or stop a turbine blade during times when frequent lightning is detected. We look at research and meteorological feedback from academia and industry to assess the latest in lightning-based blade... 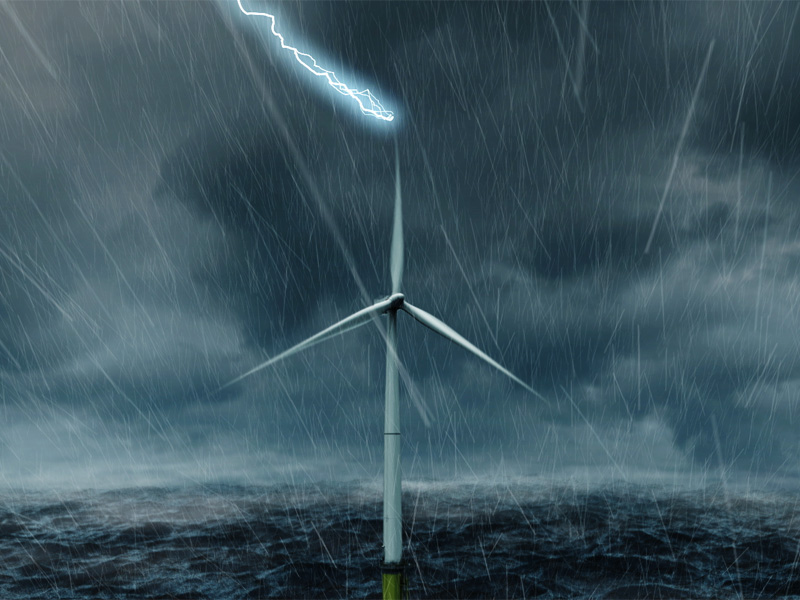 Siemens is one company leading the way in combating blade and component damage with its lightning protection system which helps prevent failures caused by lightning strikes.

Manufacturers of windmills are going high tech when it comes to developing new and highly efficient turbines that produce energy at the lowest cost possible.

Yet, all the design engineering and technology in the world might never eliminate one of the major headaches for wind farm operators – explosive lightning storms that cause havoc when they touch down on a turbine blade.

Experts estimate that a wind tower gets hit by lightning once every 12 months -- at a minimum. When scientists from MIT in Cambridge, Mass. get involved, you know the topic represents a big problem.

“One lightning strike can do so much damage to a windmill,” says Earl Williams, a research engineer at MIT who recently contributed to a study conducted by researchers in Barcelona.

“Windmills are very susceptible because a windmill blade is like a moving target; if the conductor is moving fast compared to the ion speeds, then you are much more susceptible to getting struck. Every time one of these big machines is hit, it’s a major cost repair.”

According to Gemini Energy Services, when lightning strikes a negative downward leader moves from the negatively charged storm cloud to the positively charged wind turbine. When contact occurs, current is formed and results in a bright flash, or shock wave known as the return stroke. Wind turbine blades actually have positive upward leaders that can attract subsequent strikes, with the return stroke being the most damaging.

Research conducted by Sandia National Laboratories shows that blades have been responsible for 11 percent of turbine downtime in recent years, the third largest source of any component. Although not all of that downtime can be attributed to lightning, it is anticipated that as rotors become larger, blade reliability issues could become more prominent and lightning strikes more frequent.

Nobody knows that better than the folks at Gemini Energy Services, an independent service provider to the wind industry. Gemini has been chasing down malfunctions at a windmill in Scituate, Mass., since it was hit by lightning in June of 2013.

Although there was no physical damage to the turbine blades, the lightning strike caused havoc with many of the system’s components.

“For the last year we’ve been chasing all of these ghosts that we attribute to the lightning strike, like weird currents and voltages that we are detecting,” says Jimmy Haley, a vice president and managing director in Gemini’s Massachusetts office.

“We’ve had different components fail that you usually don’t see fail. These are fairly robust pieces of equipment but they’ve been problematic.”

All modern turbine blades now come equipped with sophisticated lightning protection systems that are designed to deflect lighting away from the machine and to the ground through a highly conductive pathway from tip of blade to the ground. It is crucial to try and divert a lightning strike from hitting a blade or other major components of the turbine, including electrical systems.

However, the lightning protection systems must be properly maintained and inspected to ensure that they are working. They have also proven to be flawed in preventing all lightning hits.

In addition, blade integrity is crucial. For example, it is important to inspect blades for moisture. Even a small amount of moisture inside a blade can result in a flash boil during a lightning strike and violently slice a blade open, often resulting in catastrophic damages.

“There is no technology that I know of that can stop lightning strikes; all the technology is to deal with them,” said Paul Veers, chief engineer with the National Renewable Energy Laboratory’s National Wind Technology Center.

“We do know that lightning protection systems work a lot of the time, but not all of the time. Lighting is an amazingly capricious thing. People who run lighting test facilities say the biggest problem they have is not generating the lightning but making it go where they want it to go because it finds all sorts of paths. It is pretty random as to when it causes damage and when it doesn’t .”

It stands to reason that the storms that create some of the most damaging lightning hits also create some of the best conditions for capturing the wind needed to produce energy. So turning turbines off during storms is not an ideal solution.

However, as technology advances, experts say that it might be possible to temporarily slow or stop a turbine blade during times when frequent lightning is detected.

“The meteorological data that we have access to now is pretty phenomenal,” said Haley. “We’re pretty much tracking lightning strikes as they happen.”

Haley says his firm also uses that data to protect maintenance workers who may be working on a turbine near an electrical storm. “We have a 30 mile window so if there is any lightning at all within that distance, technicians are not allowed up tower from a safety perspective,” says Haley.

Siemens is one company leading the way with its lightning protection system which helps prevent failures caused by lightning strikes. All the main components of a turbine, including the nacelle, blades, controller, and tower, have extensive lightning protection integrated into their design.

When a wind turbine suffers a lightning strike, whether onshore or offshore, the system provides the lightning with a safe path through the turbine and down into the electrical grounding, describes Siemens. This safe path reduces the likelihood of damage to the main components.

The blade is the highest point of the wind turbine and its most exposed component. For optimal blade protection, the lightning protection system is incorporated into the IntegralBlade® design, with receptors strategically placed on the blade surface.

Siemens cited a case study that took place at the North Sea near Esbjerg, Denmark, the location of a large offshore wind power plant has been in operation since 2009 and consists of 91 units of Siemens SWT-2.3-93 wind turbines.

But for those turbines without built-in lightening protection systems, other options must come available to keep turbines online.