On a mission to be the first fossil fuel free country in 2050, Denmark has a goal of 50 percent renewables in electricity in 2020. New numbers from the wind sector indicate this goal is on track. Can others in the EU follow suit? 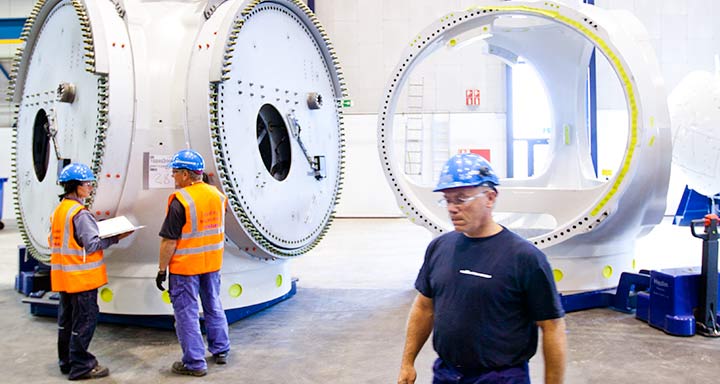 It is estimated that 80 per cent of offshore turbines are Danish made. Vestas workers on the job.

Denmark is synonymous with windmills given its pioneer status in developing commercial wind power in the 1970s. What sets Denmark apart from other wind power markets is perhaps its early decision to put its money where its mouth is by making wind power a home grown industry.

Siemens has continued to stay in Denmark due to the advantage of the Danes’ high level of productivity and talent, especially when it comes to recruiting resourceful people with extensive knowledge and a high education level.

It does not hurt to do business in Denmark either. In international surveys conducted by the likes of The World Bank, Doing Business Report; Forbes Magazine; The Economist and Goldman Sachs, Denmark comes out on top for a business friendly climate, commercial success and governance.

In 2014, for example, Vestas reported a total of 5864MW worth of wind turbine orders year-to-date including unannounced orders in Q1, Q2 and Q3. It reported 597MW in service orders in 2014.

In the past ten years, Denmark has more than doubled the amount of electricity consumption covered by wind. Though the share of electricity generated by wind has been on the rise for five consecutive years, the jump from 32.7 percent in 2013 to 39.1 percent in 2014 is the largest yet, says the Ministry of Foreign Affairs.
“The 2014 spike speaks both to the fact that the total capacity of windmills has grown, as well as to increased efficiency in the sector. As an example, the offshore wind farm by the Danish island Anholt now produces the equivalent of 400.000 Danish households’ yearly consumption of electricity,” says the Ministry.
In 2013 the Danish wind industry exports saw a minor drop to 48.7 billion DKK (6.5 billion EUR) compared to 52.3 billion DKK (7 billion EUR) in 2012, according to the Danish Wind Industry Association.

It is estimated that 80 per cent of offshore turbines are Danish made. But foreign collaboration is also in the mix. In November of last year, Wind Energy Update reported that MHI Vestas Offshore Wind had plans for serial manufacturing of the 80m blade for the V164-8.0 MW, termed as the world’s most powerful offshore wind turbine, on the Isle of Wight off the southern coast of the UK.

The company, a joint venture between Vestas Wind Systems and Mitsubishi Heavy Industries, highlighted that it will become the first manufacturer with the capacity to serial produce blades for future offshore wind projects in the United Kingdom.

The development is expected to result in up to £200m worth of economic impact, including investment and safeguarding or creating up to 800 jobs.

The world’s most productive wind turbine is located in Denmark. Since 2003 a Siemens wind turbine located in Jutland has produced more energy than any other single turbine before it.
The west coast of Jutland in Denmark is not only home to beautiful sights, but also frequent winds that power multiple wind turbines. One of these, located at Harboøre in Denmark, has thus far managed to produce 100 million kilowatt hours during its 11 years in operation. 100 million kilowatt hours correspond roughly to the total annual energy consumption of a mid-sized Danish city of 45,000 inhabitants.

“We are proud of this record, which underlines the potential of wind power. When the turbine has been bought and paid for, it stands year after year producing green energy. It also demonstrates that we can produce wind turbines with substantial operational reliability. In Denmark, we have found a niche within green energy and built up a considerable amount of expertise and know-how” says Siemens’ spokesperson, Rasmus Windfeld.

Denmark is still building new capacity and has plans for two more offshore farms set to be tendered over the next couple of years.

In ten years wind production has jumped significantly. In 2004, wind energy contributed to 18.8% of the overall electricity production in Denmark. In 2014, this figure has more than doubled. In January 2014 alone, power from wind made up 61.4% of the Nordic country’s electricity consumption, according to reports.

Denmark's Climate and Energy Minister Rasmus Helveg Petersen has remarked that the country is planning to put up more wind turbines. “We are moving forward and we have more targets," Petersen said in an interview.

On- and offshore wind turbines provide more than 33% of Denmark’s electricity consumption today, which is the highest level of wind power integration in the world. By 2020, wind power will account for more than 50% of the electricity supply, according to recent government targets.

The Danish Energy Agency has conducted a cost analysis of establishing new electricity generation facilities in Denmark and the conclusion is that onshore wind exceeds all other technologies. The analysis shows that costs for electricity production from onshore wind is about EUR 4 cents per kilowatt hour, whereas offshore wind and new centralized power plants running on coal and natural gas cost around EUR 8 cents per kilowatt hour.

Following through on clean energy promises

From 2012 to 2020, fossil fuel consumption is expected to fall by close to 20 per cent depending on the CO2 quota price development. The largest contribution comes from coal, which is being reduced by about 57%.

The 'major switch' will occur particularly in the electricity and district heating production, according to reports. The expansion of wind power and conversion of combined heating and power plants to biomass mean that renewable energy sources will constitute approximately 71% of Denmark’s electricity consumption in 2020, compared with 43% in 2012. Whereas 84% of Danish electricity needs were met by fossil fuels in 2000, the share in 2020 will have dropped to 29%.

The phase-out of fossil fuels is expected to prompt a rise in renewable energy consumption of approx. Then 47% up to 2020, e.g. as a consequence of the expansion of the Horns Rev and Kriegers Flak offshore wind farms, and the increased use of biomass, biogas and liquid biofuels for transport.

“This will raise our renewable energy share from 26% in 2012 to 38% in 2020,” says the Danish Ministry of Climate, Energy and Building. “Denmark has undertaken to ensure that renewable energy covers at least 30% of the expanded final energy consumption in 2020. This goal is therefore expected to be met with a good margin.”

With the unveiling of Budget 2015, the Government, Red-Green Alliance and the Socialist People's Party have brought Denmark closer to the goal of lowering greenhouse gas emissions by 40% by the year 2020, according to the Danish Ministry of Climate, Energy and Building.

The budget contains measures for initiating projects within geothermal energy and heat pumps in addition to a total investment of 551.9 million kr. earmarked for climate initiatives in the period 2015-2019.

The Government, together with the parties behind the Danish Climate Act, has set a goal to reduce Denmark's greenhouse gas emissions by 40% by 2020 compared to 1990 levels.

"Climate challenges are serious and require action now,” says Minister for Climate, Energy and Building Rasmus Helveg Petersen. With this latest budget we have created further impetus for Denmark's transition to a green business model. With the necessary climate funding and concrete action for transforming the energy system in place, we have moved one step closer to a fossil-free society."

“We must achieve the target we have set ourselves, and Denmark must inspire in the rest of the world the confidence and hope that climate change can be mitigated before the damage is too great,” says Petersen. “By passing the Climate Change Act, a majority of the Danish Parliament has shouldered the responsibility for Denmark’s active climate policy.”

In accordance with the Act, a permanent and independent Climate Council will be established consisting of experts specialising in energy, transport, buildings, agriculture, environment, nature and economics. A minimum of once a year, the Climate Council will propose recommendations on climate policy initiatives to the government and will contribute to the public debate on Denmark’s climate policy. The Council will be appointed for one 4-year period at a time and will comprise a chairman and six expert members.

Each year, the Minister for Climate, Energy and Building will submit a Climate Policy Report to the Danish Parliament to take stock of Denmark’s greenhouse gas emissions and its compliance with national greenhouse gas targets and international climate agreements.

Central to LCAs is the energy payback time calculation. This is the length of time the wind power plant has to operate to produce as much energy as it will consume during its entire lifecycle.

In an onshore wind power plant with an average wind speed of 8.5 meters per second, the energy payback time of a Siemens SWT-3.2-113 wind turbine is 4.5 months. This figure is based on a 20-turbine project, including a 13 kilometre grid transmission connection, and the efforts involved covering material use, manufacturing, installation, operation and maintenance as well as dismantling and end-of-lifetime treatment, says Siemens.

“The offshore Life Cycle Assessment based on a project with 80 Siemens D6 wind turbines shows another interesting environmental performance: During its estimated lifetime, it produces 53 million megawatt hours and saves 45 million tons of CO2, which is equal to the amount of CO2 absorbed by a forest with an area of 1,286 km2 over 25 years. This figure corresponds to a CO2 emission of only seven grams per kilowatt-hour (g/kWh) compared to the 865 g/kWh found with average global fossil power production,” says Siemens.

While the clean air facts behind wind power can bolster the industry’s image, currently, only onshore wind is cheaper than gas and other energy sources. Today, offshore wind remains more expensive. The industry aims at lowering these prices.

"Among other things, this means that the energy playing field must be levelled. By this, I mean to remove subsidies for all energy technologies including wind energy," states Jan Hylleberg, CEO of the Danish Wind Industry Association.

According to Hylleberg, by removing this barrier and strengthening the grid across Europe, “we can overcome some of the barriers that arise when the turbines in one region are producing a lot or a power plant shuts down unintentionally.”

He concludes: “In Denmark, we have developed an effective grid and regional market, but this needs to be broadened to the rest of EU."