China offshore: too big of an opportunity to ignore?

More than 90% of the world’s offshore wind power is currently installed off northern Europe, but the global offshore map is set to strike a very different picture in the next ten years if China can find the right tools and partners to help meet its goals. 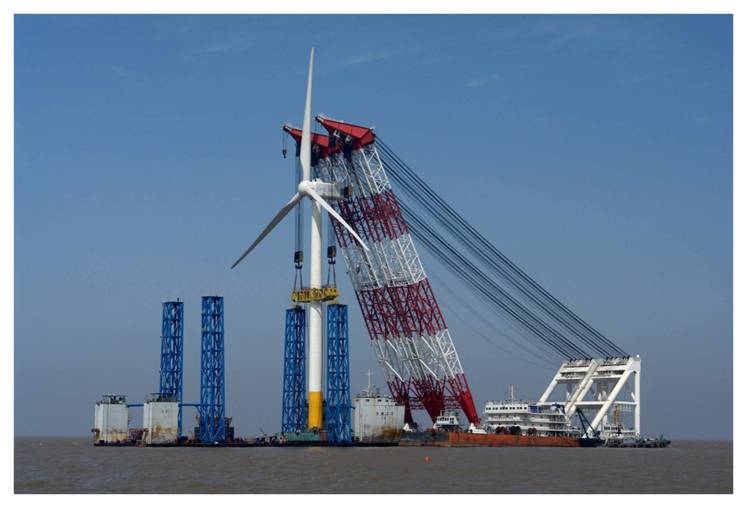 Offshore wind is an essential component of Europe’s binding target to source 20% of final energy consumption from renewables, and China has set itself an ambitious target of 30 GW of installations off its coast by 2020, according to the Global Wind...

Although the offshore wind sector seems to take up more column inches in the renewable energy media compared to its more mature sibling, onshore wind, it represents just 2% of global installed capacity. In 2012, 1,296 MW of new offshore capacity was added, a 33% increase from 2011 market, bringing the total to 5,415 megawatts, according to the Global Wind Energy Council.

More than 90% of the world’s offshore wind power is currently installed off northern Europe, in the North, Baltic and Irish Seas, as well as the English Channel. The balance of this offshore power is based at two ‘demonstration’ projects off China’s east coast.

Offshore wind is an essential component of Europe’s binding target to source 20% of final energy consumption from renewables, and China has set itself a target of 30 GW of installations off its coast by 2020, according to the GWEC.That growth projectory for China is now in question as supply chain glitches, deep sea technical and vessel offshore challenges and over-ambitious clean-energy targets make their way into government-led, rather than industry-advised energy policies.

Other emerging markets, such as the United States, have excellent wind resources offshore, and many projects are on the table for discussion or ‘under development’, but there is no offshore wind power installed yet, placing the advantage on European, and especially the UK offshore wind supply chain, to tap into China’s ambitious offshore wind plans.

China's centralised decision-making could deliver a national market-based climate policy ahead of the United Sates, where divided government and anti-tax sentiment, among other factors, continue to stall movement on comprehensive climate policy. "This if anything should encourage all countries, the US in particular, to take stronger action and go towards a strong international treaty being agreed at the UN climate change summit in 2015," says GWEC.

The Council stated in its 2012 Global Offshore Report that while offshore development has passed the 5GW mark, it still is lagging behind expectations. Actual installations in the EU member states in 2012 were 14% lower than the 5.8 GW target set in the National Renewable Energy Action Plans (NREAPs) for the end of 2012. China's target of  5GW by 2015 seems increasingly unlikely to be met, said the 2012 report.

According to a series of new reports by the Carbon Trust the UK, with more than a decade of experience in offshore wind deployment, the UK wind sector can play a key role in helping China develop its offshore wind potential. The work was funded by The British Embassy in Beijing and was supported by the Chinese Wind Energy Association (CWEA) and CECEP Wind-Power Corporation, highlighting that those representing the China wind sector are actively seeking help from established offshore wind developers and the greater supply chain.

China has set a number of targets in relation to offshore wind including a deployment target of 5GW of offshore wind by 2015 and 30 GW by 2030. At present some 1GW of near shore projects are under development, but are facing a number of “technical and commercial barriers” in moving forward at the rate required to meet the Government targets, according to The Carbon Trust.

Barriers include uncertainty over an effective and efficient long-term pricing policy that is needed by project developers while ensuring consumers are protected from high costs, a slow consenting regime and the lack of a focussed innovation programme to drive costs out of the deployment process.

Al-Karim Govindji, of the Carbon Trust said of China’s offshore wind resource and the commercial opportunity between the UK and China is significant since the UK has “an important role in offering its experience and learning to ensure that China’s vast resource is efficiently exploited”.

Govindji said that innovation across a number of areas will be essential to ensure targets are met and to drive cost reduction across the whole sector.

The new research proposes a number of policy instruments, developed to accelerate the roll out of offshore wind in the UK, be applied to China to speed up their offshore programme and help ensure government targets are met in a cost effective way. The research was undertaken working closely with the wind industry in China and involved participation of over 20 Chinese companies and undertaking two workshops in Beijing.

The new research concluded that China should consider developing an effective publicly funded research and demonstration programme to commercialise new cost reducing innovations. It was also suggested that China form an offshore wind capital grants scheme to “improve the government’s awareness of the commercial realities of developing offshore wind in Chinese waters and support R&D and technology testing”.

While these suggestions are very important one area probably sticks out as the highest priority, which is developing an effective on-going price support mechanism to balance developer incentives with government costs to ensure value for money for electricity consumers and tax payers.

The researchers also are encouraging China to develop and effective zoning policy to accelerate planning by relaxing constraints in identified development zones.

The UK’s Offshore Wind Industrial Strategy is an important development that will act as a blueprint to guide both the industry and Government in helping the UK to achieve this. This in turn is expected to also act as a blueprint for other developing offshore wind markets, such as China.

“Much work has been undertaken by developers and the wider supply chain to help drive down the costs of offshore wind, and strategic support from Government and other agencies will help to reduce costs even further,” said Keith Anderson, Chief Corporate Officer of ScottishPower, in a UK Government report published in 2013, Offshore Wind Industrial Strategy Business and Government Action.

He said in the report that the UK wind industry has been encouraged by Government support thus far and by the positive intentions to continue.

“This commitment is required to give the industry the confidence to invest billions of pounds to develop projects, which will directly support the creation of jobs and provide the associated benefits. The offshore wind sector has already encouraged investors from all over the world to the UK, and as we prepare to develop larger projects and upgrade existing infrastructure, we must continue to be viewed as an attractive destination for this investment in a competitive global marketplace,” said Anderson.

UK companies that successfully supply into the domestic market can use that success as a springboard to export their products to overseas markets. Outside Europe, UK supply chain companies can find competing for global business opportunities challenging even with UK Export Finance services, according to a 2013 UK government report, Offshore Wind Industrial Strategy Business and Government Action.

The report stated that 21 markets such as China and Taiwan offer significant potential, but also considerable challenges. There is a strong and growing body of evidence which shows the value of strategic collaboration. Major overseas contracts are more likely to be won by building a consortium of supply chain companies with complementary skills. Consortia which present holistic solutions to overseas buyers stand a far better chance of success than a bid from individual companies, according to the report.

The UK Trade & Investment (UKTI) is now focusing its strategic trade effort on connecting UK business to the most valuable global opportunities through the High Value Opportunities (HVO) programme. Currently this programme is targeting offshore wind projects in China and Taiwan and will support UK companies to identify the opportunities, reach the key decision makers and understand the procurement milestones.

Taken off more than it can chew

China has leveraged its skills and capabilities from the onshore wind industry to the offshore wind market but where the technical challenges are much greater and where the weather conditions more impactful on turbine performance. According to the Carbon trust report, initial demonstrations in China have focussed on the inter-tidal range; given that the NEA has insisted that future farms be at least 10km from shore, a rapid learning is now taking place that will take time to flow through to improved capabilities, technology and equipment.

For example, the lack of expertise as well as bespoke vessels makes installation the key cost in Chinese offshore wind development. Additionally, China lacks skills in hammering techniques as well as offshore assembly. On the operations & maintenance side of things, poor turbine reliability significantly adds cost to O&M and so can greatly reduce developer margins over time. A lack of expertise around transfer vessels also limits the operation window for conducting repairs.

But given the rapid growth of the onshore market, there can be confidence that China can achieve its offshore wind targets. However, it seems to be suggested by several governmemt and commercial sources that this goal is unlikely to be achieved without the assistance and coordination of seasoned professionals and suppliers from the UK and Europe, and most likely not by 2015, but perhaps by 2020.