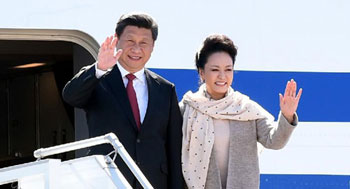 China President Xi Jinping has launched the New Silk and Maritime Infrastructure Fund, as China faces overcapacity in construction materials such as, steel and concrete, and looks to build stronger international political and trade ties. Photo...

The new Silk Road Infrastructure Fund is set to foster new relationships between Asian firms and export-hungry companies from Europe and US, on a network which spans from Asia to Europe.

“The new Silk Road strategy will bring about better export opportunities for products made in China, including by companies like GE,” a spokesperson for GE told Wind Energy Update.

Chinese wind manufacturers are now capable of producing 40 GW worth of turbines annually, while the Chinese government’s target is to install just 20 GW of new capacity per year between 2015 and 2020, according to CCM consultancy.

Severe overcapacity in China’s wind power industry is likely to lead to a large-scale market consolidation before 2020 with many turbine manufacturers being acquired or closed down, an analyst at CCM said.

Chinese domestic demand is likely to remain flat for the foreseeable future, and Chinese companies that are able to secure contracts overseas could “hold a key advantage over their rivals,” the analyst said.

China President Xi Jinping has launched the Silk Road Infrastructure Fund as China faces overcapacity in construction materials such as steel and concrete, and looks to build stronger international political and trade ties.

The fund will be invested in a variety of industries and could support trade of China-led wind projects in South Asia, Southeast Asia, Central Asia and Europe, along an integrated land corridor. Last month the fund invested in a hydroelectric infrastructure project in Pakistan.

The Silk Road Infrastructure Fund is remapping old trade and transport routes by land and sea, encompassing revised transport links as illustrated in the map below. The target infrastructure markets go beyond these transport route lines and include countries encircled in the routes, such as India, Pakistan, Egypt and Turkey, to name a few.

China’s Silk Road Infrastructure Fund aims to build on the country’s expertise in infrastructure development and boost trade with economies near and far, John Zhu, Economist at HSBC, said.

The money is sourced from China’s foreign exchange reserves, which are currently at around $3.8 trillion.
Through the scheme, the People’s Bank of China will direct $32bn to China Development Bank (CDB) and $30bn to Export-Import Bank of China (EXIM), according to a report by Caixin news agency.

China also recently created the Asian Infrastructure Investment Bank. The nation provided half of the $100bn registered capital when the bank was formally established in 2014, according to China’s Finance Ministry. There were 57 founding members countries in the bank, covering five continents including Asia, Oceania, Europe, Latin America and Africa.

A key driver behind the Chinese programs is to maintain employment at China’s state-owned infrastructure companies, such as State Grid Corp. of China and China National Offshore Oil Company (CNOOC), according to Grenatec, an academic research agency which supports the construction of Pan-Asian Energy Infrastructure.

“These [state companies] have become globally competitive from building up China and assimilating technology transfer from western companies. Without new projects, these infrastructure giants face layoffs that could lead to domestic economic unrest,” says a Grenatec Blog.

Asian installed wind power capacity rose to 142GW at the end of 2014, surpassing Europe where capacity totalled 134GW, according to a report by the Global Wind Energy Council (GWEC).
Asia will continue to lead the growth in wind power, providing 40-45% of the annual global going forward, GWEC said.

GWEC is expecting an additional 140 GW to be installed in Asia between 2014 and the end of 2019, a doubling of the existing installed capacity.

In China, the largest wind market in Asia. the current Feed in Tariff (FiT) arrangements will expire at the end of 2015. GWEC expects Asia to install around 26GW of new capacity in 2015, maintaining the level installed in 2014.

“After that, while the market may contract a bit, it’s not unreasonable to assume that China alone will install on the order of an additional 100 GW by the end of 2019, exceeding the country’s 200 GW target for 2020 by a healthy margin, and a year ahead of time,” GWEC said.

India’s wind power industry is aiming for installations to reach 5GW/annum over the next ten years on the back of new government initiatives on renewables.

“We don’t expect it to reach that in 2015, but it will move in that direction and get close by the end of the five year period,” according to GWEC.

Elsewhere in Asia, GWEC expects strong growth in Pakistan, the Philippines, Taiwan and Thailand, it said.
The Silk Road Infrastructure Fund completed its first deal in Pakistan in April. Through the deal, the fund becomes a shareholder in the China Three Gorges South Asia Investment company, which is building the 720 MW Karot Power run-of-the river hydroelectric plant and a separate Karot Dam.

An investment of $1.7bn has been committed to the project, according to reports. The hydro power plant and dam will be operated by the Chinese-owned company for 30 years and then transferred to the government of Pakistan.

“Countries with severe energy shortages, such as India and Pakistan, are likely to be targeted by China's wind power industry,” says Grace Zhang, a China based Researcher at CCM.

“However, Central Asian countries have abundant coal, oil and gas resources, and therefore the political will to promote renewable energy is unlikely to be strong in these countries. On the other hand, European countries such as Germany, Italy and the Netherlands are very keen to develop their renewable energy markets and are promising markets for Chinese wind turbine suppliers, although competition in these countries is intense,” added Zhang.

China wind turbine companies see greater growth opportunities outside of China based on recent export figures, according to a report from CCM.

A diverse group of countries are buying Chinese-made turbines. The top ten buyers include large economies such as the US, Australia, and Italy, but also Panama, Romania, and Ethiopia, according to CCM.

Exports accounted for just 4.3% of Chinese turbine manufacturers’ total sales volume in 2013, but this figure is rising rapidly and this will increase competition in the international wind market.

Chinese exports more than tripled between 2011 and 2013, whereas domestic demand fell slightly during that period, the report said.

China’s Goldwind exported 361 MW worth of turbines in 2013, more than all of the other Chinese manufacturers combined.

Sany Group and Sinovel are also focusing on export markets, accounting for 30% and 14% of their wind turbine sales, respectively, in 2013.

“Most of the Chinese wind farms are owned by Chinese companies. Dominated by the big five utilities and other [state-owned] utilities,” Qiao Liming, Director of GWEC’s China office, told Wind Energy Update.
“Chinese companies are therefore currently dominating most of the wind energy supply chain in China - from parts to OEM,” says Qiao.

“Although China manufactured wind turbines may not perform as well as overseas products in some respects, their overall performance easily meets the requirements of the Chinese market.

"The lower price of local products, together with government support for local suppliers, has been key in the growth in market share of domestic wind turbine manufacturers in China’s local wind turbine market in recent years,” said CCM’s Zhang.

New Silk Road Trade
Just a handful of foreign suppliers have made some headway into China’s turbine market. Most of the foreign activity comes from Vestas, Gamesa and GE, and these firms account for just 1.7% of market share in 2014, a combined new installed capacity of 383MW, according to FTI Consulting.

This share is increasing in 2015 with the three firms installing 469MW in the first quarter of this year, according to FTI Consulting.

US and European OEMs have made bespoke turbines for China's complex terrain and increasing demand from farm owners for better performing turbine models and data analytics is also encouraging deal flow, according to the three foreign firms.

“As in most places, Chinese wind farms are demanding higher quality products geared towards increasing productivity and efficiencies. It’s not just about the China market though, we collaborate closely with Chinese companies to jointly explore project opportunities outside of the country,” the GE spokesperson said.

GE has already signed deals along the Silk Road route, such as its contract with procurement contractor HydroChina and wind farm customer Sapphire, signed in 2014.

The deal includes 33 GE 1.5-82.5 wind turbines for the Sapphire Wind Power farm in the southeastern Pakistani province of Sindh, located outside the provincial capital of Karachi. GE will also provide 10 years of operations and maintenance services as part of the contract.

“We chose GE wind turbines because they are a well-proven technology and widely installed around the world, especially in tropical climates like that of Pakistan,” stated Nadeem Abdullah, owner of the Sapphire Wind Power farm. “GE has been instrumental in supporting Sapphire to achieve financial closure with The Overseas Private Investment Corporation (OPIC).”

Vestas has also made gains in Pakistan through a MOU it signed with the Sindh government earlier this year to develop 100MW of projects which could later be expanded to up to 300MW.

“We believe joint ventures between China and foreign firms will definitely be the strategy that Chinese players will choose to pursue when bidding for overseas wind power projects, though they may also choose to work on their own in obtaining some projects,” says CCM’s Zhang.