Case for commercialised floating turbines in offshore Japan stronger than ever

While floating offshore wind is a nascent technology, comprising just the first demonstration projects, it could be that large scale floating turbine arrays become the norm in the future, as a natural development of the offshore wind industry. 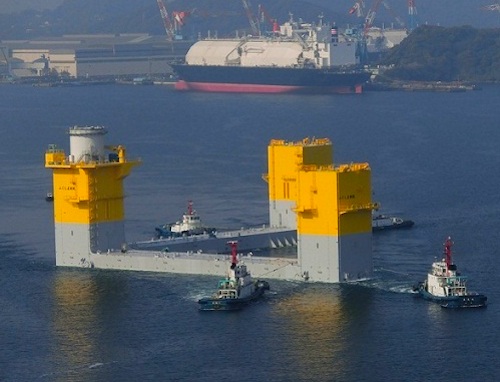 Prime Minister Shinzō Abe has said that Japan intends to become the first country to commercialise floating offshore wind power technology - even as soon as by 2018.

Most of the world’s fastest-growing population centres are on continental coastlines where the water gets deep fast. One of the most interesting regions in terms of the potential for floating offshore wind is Japan. Because of the nation’s uniquely demanding energy needs, and its tremendous deep offshore wind potential, floating offshore wind technology could mature first in Japan’s deep waters.

With no fossil fuels and limited renewable resources in its rainy climate, Japan had been heavily reliant on nuclear power until the Fukushima disaster. Though closer to the equator than Germany, its solar potential is reduced by its months of rain and its onshore wind potential is fairly limited.

“In Japan you don't have shallow water. Everything is going to be deeper than 50 or 60 m,” Weinstein notes. “So if you overlay that your best natural resource is offshore wind and you are in very deep waters, the answer becomes very simple. You’re going to develop floating offshore wind technologies and capabilities; because that's really where you are going to get the most of renewable energy generation.”

Weinstein believes that Japan will probably surpass the rate of growth of the UK, but with focus on floating offshore wind. A study by DNV-GL also found that the deep waters around Japan and the high and increasing energy demand regionally to be the driving force for the development of a floating offshore wind industry over the next 40 years. At almost 1,600 GW, Japan’s deep water offshore wind potential is about 8 times its current total electricity generation.

While Europe originally developed offshore with fixed turbines, “Japan, on the other hand, is going to go towards floating immediately and is going to expand much quicker because it has a need,” she says. “And offshore wind presents an opportunity to bring that energy very quickly to meet market demands.”

Japan’s first step to assess and harness this tremendous potential is the Fukushima floating offshore wind farm demonstration project, or Fukushima FORWARD, funded by the Ministry of Economy, Trade and Industry. The project assesses each of the three main types of floating turbine structures - semi-submersible V, tension leg platform and spar.

In its first phase, Fukushima FORWARD developed the world’s first floating spar-based substation and connected the undersea cable to harness power from a 2MW semi-submersible floating platform developed by Mitsui, in 100m to 200m water 20 km from Fukushima.

For Phase 2, now underway, Mitsubishi has built a larger and much more steel-intensive version of a semi-submersible V-shaped floating platform. The anchors and chains are now being laid, and the cables will be buried over the next few months. By year’s end, a 7MW Mitsubishi turbine will be positioned on the platform.

Jatin Sharma, head of offshore renewables insurance for US and EU-based GCube is very impressed with the care taken in the Japanese development process, avoiding some of the inherent risk in the development of offshore wind in the North Sea.

He has seen a trend for European utilities and developers to put their smaller subcontractors into the position of assuming risks that are too great for their balance sheets.

“Things take a little bit longer in Japan. But when they are carried out, they are carried out with very heavy and weighty due diligence and confidence in what is being done,” Sharma explains. GCube is one of the lead reinsurers of Fukushima FORWARD.

“We found that the Japanese market is very transparent. There’s a lot of emphasis on sharing, the need to collaborate and employ best practices. We found the whole process to be extremely professional, more so in fact than some of the other European countries.”

The first offshore wind in the North Sea was pioneered very differently, by start-ups.

“If you take the Round 1 hundred megawatt type projects, they were generally started by very small onshore developers,” says Nigel Crowe, Director of Project Assurance & Wind Analysis at the renewable consultancy TÜV SÜD PMSS. “The utilities stayed out of the first tranche. They weren't able to move that quickly. Small developers had more appetite for these risks.”

“The Danes’ approach was to move very, very quickly in offshore wind, not necessarily to the benefit of the project, because of the drive to de-risk supply chains and new markets and greater revenue.” Sharma relates. “But the Japanese business model is very similar to Germany’s export-led growth. They will try and deliver and prove an industry in their own market before they go mass-marketing and sell it all over the world.”

The Japanese government has made a very conscious effort to utilise almost all of its big industries, and huge industrial prowess, reviving heavy industries engaged in steelmaking, shipbuilding, as well as current global leaders like Mitsubishi and Hitachi in the turbine industry.

“Japan understands that they will pay a higher price at the beginning while the technology matures,” Weinstein maintains. “But they realise that going forward the cost that they saw in the Fukushima FOWARD Phase 1 and that what you will see in Phase 2 will not work and it will never be economical. They have to look for something different.”

“The Japanese model is to get to 1 GW by X number of years and that will favour those supply chains that deliver that,” Sharma judges. “Nearly all the content in the project is Japanese.”

While GCube as lead reinsurance firm might seem the exception, he says foreign firms are not allowed to offer direct insurance in Japan. As reinsurer, they worked very closely with the local insurer Tokio Marine & Fire Insurance Co.

A plan announced earlier this year by the Ministry of Economy Trade and Industry (METI) will open a follow-up project focused on cost reduction and efficiency - that will allow international cooperation.

“We believe there is an opportunity for us to participate in future projects,” Weinstein says. “But you still need to look for a local partner and that's the only way you're going to go forward on Japanese projects.”

Prime Minister Shinzō Abe has said that Japan intends to become the first country to commercialise floating offshore wind power technology - even as soon as by 2018.

Weinstein predicts that a 100MW floating offshore wind farm could be installed by 2020, just in time for the Tokyo Olympics.

Whichever way Japan develops its floating offshore wind, it is just a matter of time before it becomes a major force.