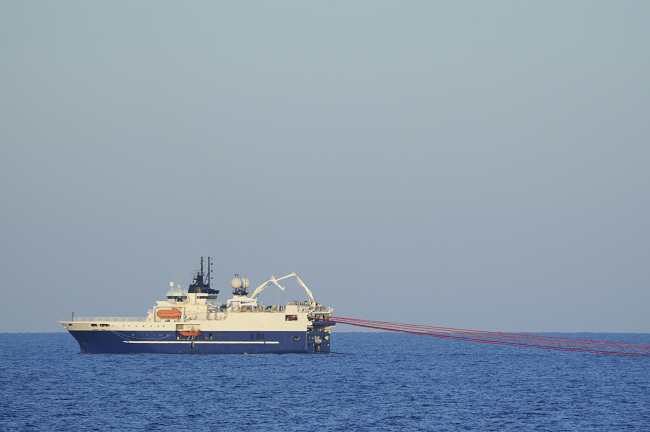 The current fleet of cable lay vessels is well suited to serve the demands of the European offshore wind market in the short and mid-term, he said. Some of the existing cable lay vessels are currently not fully utilized and there is more tonnage scheduled to come on stream in 2017.

Installations are expected to pick up in 2017-2019 after a slower 2016, though there is more uncertainty over future volumes and regulation in a number of markets after 2020.

Recently, DeepOcean completed Phase 1 of the Race Bank array cable installation campaign and plans to start and complete Phase 2 in 2017. The company is now commencing the installation of 50 array cables for the Bligh Bank Phase II Offshore Wind Farm in Belgium and is scheduled to complete in December.

Readyhough said that the company is not planning any other new builds at the moment since its own fleet and the cable lay vessels market in Europe are currently well supplied.

In 2017, Maersk Connector will start the cable laying work on the NEMO interconnector between Belgium and the U.K. and is due to begin installing the export cables for DONG Energy’s Walney Extension offshore windfarm in the Irish Sea.

In the long term, the vessel is expected to work in the growing offshore interconnector and export cable markets.

Also in 2017, DEME plans to deploy its newly launched Living Stone subsea cable installation and trenching vessel to lay inter array cables for the Merkur offshore wind farm in the North Sea in Germany. The ship will also service the Hornsea Project One wind farm off the U.K. east coast.

Though the U.K. has committed to a solid pipeline of offshore wind projects, the demand for cable laying services in the country in the next decade will depend heavily on the future of the Contract for Difference (CfD) support system for renewable energy.

In September, the U.K. government said it plans to make the CfD support mechanism available beyond 2020 – extending the delivery period for CfD from March 31, 2020 to March 31, 2026 – which will allow the running of future allocation rounds and will remove a key barrier to long-term low carbon investment in the country.

In March, the government set aside up to £730 million (€869 million) under the CfD framework to support offshore wind and other less established renewable generation projects commissioning in 2021-2026.

However, the next CfD auction for offshore wind subsidy contracts has been delayed until early 2017.

Another major question mark for future cable demand in the U.K. will be the potential effect of Brexit on the existing and planned projects to link the U.K.’s electricity grid with other European power networks under the EU’s regulatory framework for market coupling.

The supply chain for interconnector cable lay vessels, equipment and tooling could be affected if the timing of these projects changes or if new local content requirements are introduced, for example.

While the plan might create an uneven build-out rate in the country after 2020, Readyhough said recent changes are providing more clarity on the project pipeline through 2025, and even 2030. He expects to see an average of two offshore wind farms per year, or about 500-800 MW annually, installed in the German sector from 2021 through the end of the decade.

The plan will offer fluctuating tenders for offshore wind and introduce a limit to offshore installations. The offshore cap, which will apply from 2021 until 2030, will vary from year to year to ensure that Germany reaches its 15 GW wind energy target in the next 15 years.

While the plan might create an uneven build-out rate in the country after 2020, Readyhough said recent changes are providing more clarity on the project pipeline through 2025, and even 2030. He expects to see an average of two offshore wind farms per year, or about 700-800 MW annually, installed in the German sector from 2021 through the end of the decade.

Meanwhile, in the Netherlands, the government’s long-term development plan for offshore wind is giving investors, developers and suppliers a 5-10-year visibility on the market.

As developers look to build projects in deeper water and farther from shore, the availability of the right type of vessels could be key to reducing cable-related installation costs, which make up about 2% of the lifetime costs of a typical offshore wind farm.

Among other future feature requirements, Readyhough expects to the next generation of cable lay vessels to have bigger capacities for cable storage.

Another potential trend for subsea power cable lay vessels, he said, will be a move to traditional underdeck storage, which protects the cables and opens up deck space for the deployment equipment.

In June, for example, Royal IHC in the Netherlands announced a new dedicated deep-water inter array cable lay vessel to its portfolio of designs that features two carousels below deck that can be loaded simultaneously.

Export vessel capacities will also be growing in size to adapt to future project requirements – from about 5,000 tons to 7,000-11,000 tons – and the capabilities of those vessels, such as the Maersk Connector, are improving as more “bespoke designs” are coming on line, Readyhough said.