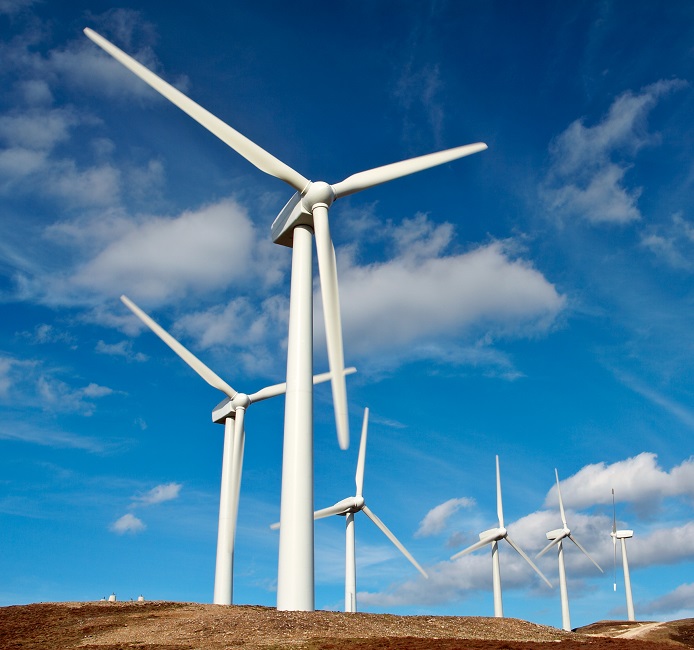 As competition drives consolidation in the wind sector, the merger of Siemens and Gamesa saw the group rise to number two in onshore wind installations. (Image credit: Thebroker)

"Big four" turbine suppliers install over half of market in 2017

Aggressive price competition continues to spur consolidation of the wind turbine market and new installed capacity fell 12% in 2017 to 47 GW, mainly due to a slowdown in China, BNEF said. New installations are expected to rebound to 55 GW in 2018 "as the Chinese market returns to growth and Latin America continues its expansion," BNEF said.

Siemens Gamesa, formed in 2016 from the merger of Germany's Siemens and Spain's Gamesa, commissioned 6.8 GW of new wind capacity in 2017. This raised Siemens Gamesa's market share to 15%, up from 11% in 2016 (combined), allowing the company to leapfrog GE and Goldwind in the global rankings. Including offshore turbines, Siemens Gamesa became the largest supplier with a total of 9.5 GW.

“We’ve seen a wave of mergers in the wind turbine manufacturing industry in the last few years, including the Siemens-Gamesa deal and Nordex’s takeover of Acciona Windpower," Albert Cheung, Head of Analysis at BNEF, said in a note.

"With a large number of small players outside the Big Four, it would be no surprise to see further consolidation,” Cheung said. 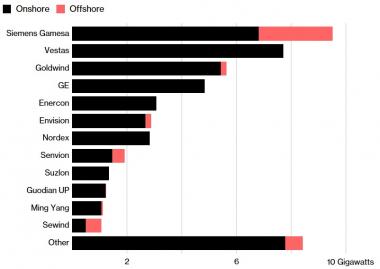 In 2017, a number of small- and medium-size turbine vendors were either required (China Creative Wind Power), filed for insolvency (FWT Energy and Seawind), entered into receivership (Vergnet) or withdrew from the wind industry (Daewoo and JSW), FTI consulting noted in a separate report.

According to BNEF, Germany’s Enercon was the fifth-place manufacturer in 2017, commissioning 3.1 GW. Six other turbine makers from Europe and China commissioned between 1 GW and 3 GW.

In terms of geographical spread, more than 90% of Goldwind's turbines were commissioned in China, while General Electric remained stronger in the Americas than other global regions, BNEF said.

Vestas and Siemens Gamesa both commissioned significant capacity across the three main regions of Europe Middle East and Africa (EMEA), the Americas and Asia-Oceania.

Almost all of Enercon's capacity was commissioned in Europe.

Since 2016, Chicago-based Uptake has been piloting its wind predictive analytics software with MidAmerican Energy Company, an operator of 4.3 GW of U.S. wind capacity. Both companies are owned by Berkshire Hathaway Energy (BHE).

“Pattern Energy has been impressed with the value Uptake has brought to wind fleets and major companies in other industries,” Ben Rice, a senior engineering manager for Pattern Energy, said.

In just three years, Uptake has expanded into multiple sectors such as mining, oil and gas, rail, aviation, construction and manufacturing.

In the wind sector, the company is developing new functionalities which will increase the sophistication of the system and allow operators to respond to a range of market conditions.

The gradual removal of tax credits for new wind farms and expiry of credits for older turbines will expose more plants to wholesale market prices. In order to minimize costs, wind fleet operators must shape their O&M strategies around wholesale market drivers, as well as system performance.

Following a 60-day pilot, Invenergy has agreed to use NarrativeWave’s software to optimize its fleet of wind turbines and other renewable energy assets.

The pilot involved "empowering mechanical, electrical, and turbine performance subject matter experts (SMEs) to rapidly build analytic models and deploy them across a fleet of turbines without the need for data scientists," the companies said in a statement.

In some cases, the new processes reduced return-to-service times by over 50%, the firms said.