A selection of news from the last month. 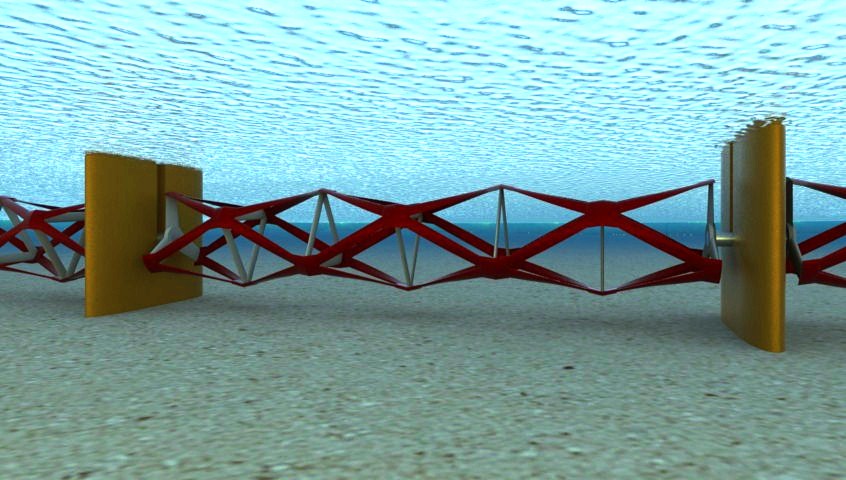 The tidal fence’s levelised cost of energy will be in the range of £100-£130/MWh ($0.16-0.20/KWh) for utility scale production, according to Peter Dixon, Kepler Energy’s Director.

Kepler Energy plans to expand the fence to a capacity of at least 500 MW, Dixon said.

The 1 km tidal fence is expected to be located in the stretch of water between Aberthaw and Minehead, subject to planning and financing, the company said in a statement.

The cost of the tidal fence is estimated at £143 million and it will adopt carbon composite technology.

The production cost of £100-£130/MWh has been achieved through higher power output than a conventional horizontal axis turbine, due to its blockage effect and its geometric advantage, Dixon told Tidal Today.

The area of water captured is higher for a rectangular shape than for a circular shape.

Kepler Energy’s technology was developed by the Department of Engineering Science of Oxford University.

“There are good locations for our technology in many places in the world, including France, Japan, Korea, China and Indonesia. These should ensure excellent growth prospects for the appropriate technological solutions,” Dixon said.

The underwater monitoring platforms are currently in the final testing stage in Dartmouth, Nova Scotia, before sea trials in the Bay of Fundy.

FAST has been designed for the monitoring of currents and turbulence, marine life activity, noise levels and seabed stability of the FORCE site, which is situated in the Bay of Fundy’s Minas Passage.

Minas Passage is an entrance to Minas Basin, which hosts the world’s highest tides, with a tidal range that reaches 53 feet (16 meters).

In 2014, FORCE installed four underwater power cables along the sea floor of the Minas Passage. With a combined length of 11 kilometers and a total capacity of 64 MW, the cables hold the world’s largest transmission capacity for tidal power.

The UK government granted development consent June 9 for the building of the £1 billion ($1.6 billion) Tidal Lagoon project in Swansea Bay, Wales, which will be the world’s first tidal lagoon power plant.

Tidal Lagoon Swansea Bay is now looking for Tier 1 contractors to run the lagoon facilities outside of the main power generation plant, the company said.

General Electric and Andritz Hydro were previously named as preferred bidders for the O&M management of the lagoon turbines and power generation facilities.

The Tidal Lagoon Swansea Bay development will contain up to 16 variable speed hydro-turbines with a gross installed generating capacity of up to 320 MW.

Each turbine will have a maximum output of 20 MW and the net annual output of the project is estimated at approximately 495 GWh.

Ocean Energy Europe, the industry body for ocean renewable energy, said it welcomed the EC’s Innovation Fund for emerging renewable technologies, “as long as the fund is fit for purpose: financing first-of-a-kind projects.”

Existing EU-level support for innovation is to be “supplemented through dedicating 400 million (Emissions Trading) allowances” for innovative projects, EC said in its proposal document.

“An extra 50 million allowances is added to this amount from the allowances that remain unused in 2013 to 2020 and would otherwise be placed in the Market Stability Reserve in 2020. While such innovation support is currently limited to carbon capture and storage and renewable energy projects, the proposal broadens the support to industry with the aim to boost low-carbon innovation incentives,” it said.

Rémi Gruet, CEO of Ocean Energy Europe, said the innovation fund provided by the scheme will “maximise its impact by providing its finance up-front, keeping its processes flexible, and pushing emerging renewables, like ocean energy, on to the marketplace.”

Ocean Energy Europe is formed of 98 organizations, including utilities, industrialists and research institutes.

The Commission’s proposal will now be reviewed by the European Council and European Parliament.