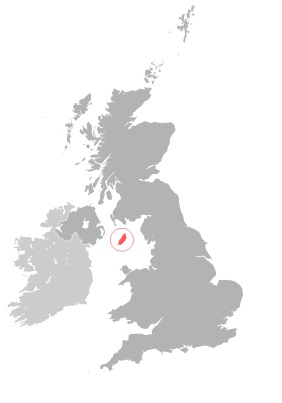 Manx Tidal Energy was awarded in October a seven year survey licence to work in a 126 km2 area off the Isle of Man, a UK island in the Irish Sea.

The company will assess the practical and commercial viability of tidal power production off the Point of Ayre, on the Isle of Man’s northern tip. The long-term plan is to install as much as 240 MW of capacity, at Point of Ayre and two sites in the south off Calf of Man and Castletown.

The award of the survey license follows the decision by the Isle of Man government last November to select Manx Tidal Energy and Dutch developer Tocardo Tidal Energy as preferred partners for tidal development. Tocardo has proposed to develop in an area south of the island.

If Manx Tidal Energy’s surveys for Point of Ayre prove that a tidal array is viable the Isle of Man government will look to agree a lease for development.

Above: the Isle of Man is situated where the northern sweep of green circles banks west.

Attracting investment has been a challenge for tidal developers. Much of the R&D costs for tidal technology have been funded by major Original Equipment Manufacturers such as Siemens, Andritz Hydro, Voith and Alstom, with many also taking on the role of developer.

“Instead of starting from the point of view: we have a turbine design– how will we finance its development and installation? We started from the perspective: what kind of turbine is needed to get the finance?” Piggott said.

Manx Tidal Energy has established warranties for its technology-- key to attracting commercial investment-- and is planning to go to final design enhancements prior to serial production. Some 30 turbines will be installed in the first phase of the project.

Manx Tidal Energy’s turbine system is based on a ducted Ventrui tube which was originally designed in 2009 to supply power to a Derillion property investment in the Caribbean. The company has enlarged the turbine design from the original 65 kW model and plans to install 1 MW turbines at Point of Ayr and Castletown and 350 kW turbines at the Calf Of Man site.

By avoiding designing the turbine from first principles or pushing for high turbine capacity, the company has made significant cost savings, Piggott said.

“We have not had to completely re-engineer the turbine by going up a step in size and each time designing new bearings, housings, sealing and the like,” said Piggott, contrasting the development model with projects aiming for turbines of capacity 2 MW or above.

Manx Tidal Energy made improvements to the turbine’s generator, blades and other components and engineering company Siemens is to supply and manufacture major components. Piggott would not disclose the estimated Levelised Cost of Electricity of the system.

The developer also has been able to access Derillion’s wide variety of funding sources. Equity finance sources include a hedge fund and a renewable energy fund, according to Piggott.

The UK’s tidal sector is faced with a limited supply of investors willing to take on the risk return profile of the first array projects, due to the potential and timing of investment returns. Across the tidal sector, institutional investors and venture capital companies continue to demand strict financing terms and this has impacted project schedules.

Private sector funding is required for public funds to be released and there has been relatively little investment interest from utilities.

“The main challenge to bringing in other investors and funding has been project and technology uncertainty,” ORE Catapult, the UK technology innovation and research centre, said in a report in November 2014.

“Both these aspects continue to evolve as new challenges are overcome, often causing investors to seek further rounds of due diligence before committing to investing. This delays projects from reaching financial close,” ORE Catapult said.

One developer which has seen significant progress is Atlantis Resources. The company has sourced a mixture of private and public funds to finance the first phase of its 400 MW Meygen project off Pentland Firth on the northern coast of Scotland.

Meygen demonstration Phase 1A will install four 1.5 MW turbines in 2016 and the GBP51.3 million financing uses a combination of debt, equity and grants from a funding syndicate which includes the UK Crown Estate, the Scottish Executive, the Department of Energy and Climate Change and Highlands and Islands Enterprise.

Last month, The European Commission’s Climate Change Committee approved the transfer of Eur17 million of funding from Atlantis Resources' Kyle Rhea project to develop phase 1B of the more-advanced Meygen project. The entire Meygen plant is expected to the online by the "early 2020s," according to the project company’s website.

OpenHydro is developing a joint project with utility-owned SSE Renewables to install a 200 MW Brims Tidal plant in Pentland Firth, Scotland, from 2019.

In another joint project, OpenHydro and Brookfield Renewable are developing the 100 MW Tidal Ventures tidal project at Torr Head, Northern Ireland, which is scheduled to start operations in 2020.

Corr suggested additional support mechanisms are likely to be needed to meet unexpected project challenges as pre-commercial array installations are rolled out.

“In the case of offshore wind, for example, we’ve seen projects run into difficulties with cabling and weather that are not specific to the technology,” he says. A contingency fund to cover these problems has been suggested by some industry participants.

New standardisation methods for project development in the tidal sector are also being developed by the International Electrotechnical Commission (IEC), emulating some of the practices in other offshore industries. This allows assessments to be adjusted according to technology configurations.

The new methods from the IEC will allow investors to calculate and compare the production levels of different technologies, using appropriate standardised metrics, Corr said.

“If investors are considering two different sites and technology configurations then using the same ruler to evaluate each clearly provides a level of confidence,” he said.

A funding pool to finance common technical issues could also help maximise the benefits from the limited test sites and resources.

ORE Catapult is in early stage discussions with a number of governments and project developers to identify collaboration opportunities to resolve generic technology risks.

“The goal is to allow projects to share learning and technology development risk,” Cheeseman said.