Tidal gets a hand from big industrial concerns

Tidal gets a hand from big industrial concerns 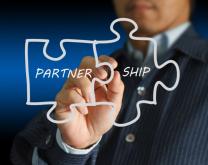 A rash of industrial tie-ups in the offshore wind industry is raising the issue of whether similar levels of cooperation could benefit tidal.

Recent weeks have seen wind players Areva and Gamesa setting up a joint venture, shortly after the announcement of a similar agreement between General Electric and Alstom. Vestas is seeking to test the world’s largest turbine in a joint venture with Mitsubishi Heavy Industries.

Whether these partnerships will herald similar moves in tidal later this year remains to be seen, however, partnerships are forming in tidal power in the UK and abroad as seen by Atlantis Resources and Lockheed Martin, for example.

Tidal developers, such as Ocean Renewable Power Company and Voith Hydro declined to comment in July on potential commercial agreements and companies including DCNS, Nautricity and Scotrenewables Tidal Power did not respond to requests for information.

Alstom, which owns Tidal Generation Limited (TGL) and is currently testing a turbine design at the European Marine Energy Centre (EMEC), confirmed it had no current plans for further industrial partnerships.

“Alstom acquired 100% of TGL in 2013 after the successful installation and grid connexion of a 1MW tidal machine in the Scottish waters of EMEC in Orkney,” says Cécile Dodat, media relations and content senior manager at Alstom Renewable Power.

“Testing is progressing very well and has provided confidence in both the technology and in understanding the environment. We will carry on testing at EMEC in the coming months, with the results helping to finalise our commercial offer to customers.”

Alstom’s situation seems similar to that of a number of other leading tidal players, which are large industrial concerns that have directly acquired start-up tidal developers.

Siemens, for example, bought Marine Current Turbines in 2012 after acquiring a stake in the company two years earlier. The same year, Andritz Hydro became the major shareholder in Hammerfest Strøm of Norway.

In 2013, DCNS took a majority stake in the Irish developer OpenHydro. Not all developers have gone down the acquisition route, however. Kawasaki Heavy Industries, although secretive about its plans, appears to be doing all its development work in-house.

Some other developers, meanwhile, have gone into partnership with big industrial concerns rather than selling outright. Perhaps the highest-profile partnership to date has been that forged between Atlantis Resources and Lockheed Martin.

The two companies, which did not respond to requests for comment, have been working together since 2011. And the alliance certainly does not appear to have hampered their path towards commercialisation.

Atlantis is arguably one of the most advanced developers in the market, with plans underway for a 400MW array, MayGen, in Pentland Firth, Scotland, plus a turbine test in Canada’s Fundy Ocean Research Center (FORCE) and projects in Australia and Asia.

“With us acquiring the MeyGen project, and receiving full consents to begin construction of the project’s first phase, it has been an amazing 12 months of growth for Atlantis,” said Tim Cornelius, chief executive officer of Atlantis Resources, in a press statement in March.

“Our AR1500 development programme with Lockheed Martin will ultimately deliver the rapidly growing tidal energy industry the most advanced, robust and powerful tidal turbine system available on the market.”

Other companies have preferred to mix and match ownership and partnership structures depending on circumstances.

The turbine maker Schottel, for example, is listed as a major shareholder in TidalStream after emerging as a project investor in 2011. TidalStream, meanwhile, is commercialising a turbine platform system called Triton that is open to other developers.

And both Schottel and TidalStream are working with Black Rock Tidal Power, a tidal ‘systems integrator’, on the development of a 2.5MW project at FORCE.

So for now it seems the preference for partnerships is mainly driven by what tidal players can accomplish, or not, in-house.

For instance, says Dodat: “As an original equipment manufacturer, Alstom have the engineering capability, the industrial capacity and the aftermarket organisation to manufacture and provide through-life support.

“Where it is appropriate we are developing supply chain partnerships and alliances that add value to our offering in order to support our customers with the development of their tidal projects.”

But even if partnering appears to be very much on a case-by-case basis among the big industrial concerns, it seems to offer benefits for the industry overall by helping different technologies achieve commercialisation more quickly.

And the advantages are not just for the companies concerned. Smaller developers that do not have major corporate partners can also benefit thanks to a halo effect, explains Paul Hales, director of the independent developer Hales Water Turbines.

“There has been an awakening of interest by large high-profile buy-outs or mergers between the technical developers and generation-industry based companies,” he says.

“Hales Energy, along with many other much smaller tidal stream developers, will naturally benefit from the general expansion of publicity that these large projects will provide, providing they are successful, do not create a major environmental issue and gain public support,” says Hales.