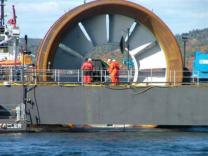 “The PUD and its funding partners have worked for years to get regulatory clarity regarding the requirements and associated costs to enable a well-informed decision,” said PUD General Manager Steve Klein.

“After eight years in the federal, state and local permitting process and a decision by the U.S. Department of Energy to not share the rising costs of the next stage of the project, we cannot justify going forward. The tidal project, however, remains worthwhile to pursue on behalf of the nation to further the potential development of marine renewable energy.”

According to the PUD, the requirements became more onerous than expected for a temporary research project.

“Our Board and the citizens we serve, have challenged us to find new cost effective sources of renewable energy with a focus on our own backyard, and tidal power was a potential source that deserved our full and diligent consideration,” added Klein.

No reliance on ratepayers

The tidal project has not relied on ratepayer funding, but instead funding has come primarily from federal-based grants and in-kind contributions from various partners. Some additional funding came from the sale of excess renewable energy credits (environmental attributes) from the PUD’s wind power projects.

The research has been a partnership with several contributing participants, including the Department of Energy (DOE), the University of Washington (UW), the Bonneville Power Administration (BPA), Pacific Northwest National Laboratory (PNNL) and OpenHydro, a tidal energy equipment manufacturing company.

The PUD filed its first preliminary permits with the Federal Energy Regulatory Commission (FERC) in June 2006. The project was intended to further the DOE’s knowledge – and that of the nation – regarding tidal energy, and it was to be sited in Puget Sound for three to five years and then removed.

Initial site preparation was slated to begin in 2015. The PUD was at the stage of soliciting the final bids to move forward with the construction of the project at the time it received notice from the DOE that the federal agency would not increase its shared expenses for the research project.

Rising material costs, but not all lost

Over the past several years, the cost of the materials needed to eventually build the project has risen and various entities have mandated an increasing amount of studies and monitoring requirements beyond installation of the tidal turbines. These have all contributed to an increase in the estimated cost for the next stage of the research project.

The DOE had originally accepted responsibility for at least 50 percent of the cost of the project; this support was tied to a fixed dollar amount at a time when the final requirements and costs were undefined. Since then, the costs have increased and the DOE was unwilling to contribute more funds to maintain its proportionate share, according to Snohomish County Public Utility District.

"While the project will not move forward without additional research partner funds, a great deal of value has been derived from the study process over the past eight years. The University of Washington developed numerous underwater monitoring devices that have application to a variety of ocean related activities," said the utility district in a statement.

In addition, much of the work has been focused on the baseline conditions of the sea floor and related usage by various fish and marine mammals.
This data has greatly enhanced the collective knowledge of the environment and species that inhabit Puget Sound. The results have helped inform tidal energy researchers worldwide.