Work is now set to begin on the largest turbine proposal in Europe, after the Scottish Government gave the consent to begin the 86MW Pentland Firth tidal energy project. 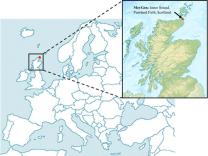 Initially construction will begin on a demonstration array consisting of six turbines, located in the Inner Sound off Pentland Firth, starting in the early months of 2014 with the turbines to be commissioned the following year.

The aim is that the demonstration device will provide important data on environmental surroundings, and the future of the development phases to implement the full project.

Eventually it is hoped that the array will produce up to 398MW, this has the potential to power over 40,000 homes.

The task will be administered by Meygen, which until recent weeks was a joint venture between shareholders that included the investment bank Morgan Stanley, GDF SUEZ Energy International, and technology experts Altantis Resource Cooperation.

Tim Cornelius, Chief Executive Officer of Atlantis Resources said at the time of the acquisition: “The size, location and tidal resource of MeyGen make it one of the most exciting marine energy projects under development anywhere in the world and Atlantis has been considering increasing the size of its shareholding for some time, subject to the award of consents. Now that the project has cleared this major regulatory hurdle, it is the logical time for us to do so.”

John Woodley of Morgan Stanley said thatnow that the MeyGen project has achieved offshore consents it makes sense for control of the project to revert back to Atlantis Resources. “We continue to be a shareholder in Atlantis and remain involved and supportive of its development plans both in the Pentland Firth, and elsewhere around the world,” said Woodley in a statement.

Commenting further on Atlantis’ rationale for the acquisition, Cornelius said:“Although attractive in itself, ownership of MeyGen will also serve one of Atlantis’ wider strategic objectives. We are already actively working on sites in Canada, India and China, and are exploring options in several other locations around the world.

Cornelius said that taking full ownership of MeyGen would allow the business to strengthen its credentials as a developer of tidal power projects, which complements its other principal activity as a turbine developer with technology partner, Lockheed Martin.

‘We will seek to consolidate our position as one of the leading marine energy companies by building our project development pipeline in the UK, Europe, North America and the Far East in the coming years,” he said.

Meygen as a business has carefully created a series of development phases that will form the stage by stage approach to the project.

A 15MW grid connection has been secured with a local distribution network, which is managed by the Scottish Hydro Electric Power Distribution plc. The power from the connection is expected to be available from next year.

Meygen went a step further, having agreed another connection to the high voltage transmission network with Scottish Hydro Electric Transmission Ltd that will cover a significant amount of the rest of the project.

As for the design of the turbines, the concept outline was completed in 2009, then a subsequent two year period of Front End Engineering Design followed, which concluded in December 2011.

It was decided that for onshore construction, there would be a substation included, where cables will be installed to connect to the grid where Gills Bay has been identified as the connection point.

As for the suppliers of the project, contracts will be awarded on turbine building, cabling on and offshore, drilling and all civil works, and all onshore and offshore construction and conditioning.

Dan Pearson, spokesperson for the Meygen project, explains: “Our suppliers for the project have all been chosen, although as we are engaging in on going exclusive negotiations, we have not made the supplier names public just yet. From April onwards we have looked at the scope of what each supplier has to offer.”

“One of the main criteria that we looked for was simply enthusiasm for the project, and people that had previously helped the sector develop, and had taken on risks themselves with investments to develop their own technology, this swung us towards them.”

He continued: “There has been a multi contractor approach, and we are looking to place an array which would be sustainable to build on in the future, and the contractors understand that. As for the procurement process this is running parallel with other parts of the project, and we are trying to secure the necessary funding.”

The supplier market will undoubtedly be enthused by the enormity of this project, as this will create a certainty in the plethora of supplier markets, which potentially will lead to a more appealing climate to invest further in tidal energy infrastructure.

As one of tidal’s main drawbacks is the high level of relative costs, the more products that are ‘on the shelf’, can only bring those costs down.

Timing for a track record

“The MeyGen project is undoubtedly one of the leading projects in the world. After having secured the Marine Energy Array Demonstrator funding from the UK Government, MeyGen is set to install the initial phases of its project. The MeyGen project is important because it is a significantly sized, world leading project in one of the areas of highest resource,” says David Krohn, Wave and Tidal Manager for RenewableUK.

He adds: “It will demonstrate the capacity of tidal energy technology to generate meaningful amounts of electricity and generate a profit for investors. Developing a track record of success is crucial in the drive to foster investor confidence.”

Using a simple mathematic equation, RenewableUK believes that the array will be able to eventually power at least 42,000 homes, as households require an average 4.37MWh per year. And for these 42000 homes, this is a total of 183,540 MWh per year.

More importantly, the lasting legacy of Pentland Firth could be the viability of a multi device array, where proven technology may prove a catalyst for future investors into the tidal industry, boosting employment and the decarbonisation of the UK for many years to come.