The Hales Turbine Project has kept a low profile during development, but as interest grows in the design and the first micro-generation unit types enter the market later in 2014, “we expect to become more well known”, says Hales Water Turbines Director, Paul Hales. 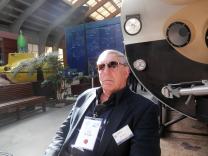 Hales continues: “Especially, as we, along with several other new developers, are targeting the lower water flow areas at 1.0 m/s and above, which have vast potential world wide.”

Paul Hales is a “lifetime” marine and mechanical engineer, that has been involved with tidal stream turbine development for over thirty years in both the USA and UK. He is Director of tidal stream turbine development company Hales Water Turbines Ltd, based in Hastings, East Sussex in the UK. The business has its own Water Flow Test and Display Tank facilities to take the patented Hales Turbine design in several forms to market in 2014. Here Hales writes of the global tidal energy market and how tidal stream energy developers are fitting into the grander tidal power puzzle and why he believes the UK tidal market's progress is starting to slip behind.

The power-generation sector - ranging from small local communities to huge multi-national conglomerates - is beginning to wake up to the potential of tidal energy in its various forms, such as the direct harvesting of it from the water-flow by means of tidal stream turbines and the capture, by tidal barrage or tidal lagoon, of the energy contained in the water as its level rises and falls.

For about the past 10 years, marine energy (tidal and wave) has been generally classified in the same category as nuclear fission. In other words, it definitely works and its output could be enormous - but the financial cost and the challenges involved make it a less attractive option than say some simpler, but comparatively inefficient, forms of renewable energy. This situation, combined with the UK government's obsession with meeting its 2020 targets, is driving investors down a low-risk, high-return route that often favours systems that are both environmentally and socially unwelcome - such as onshore wind farms and large PV arrays.

In the UK, tidal energy research and development is led by the world-renowned EMEC test site and is supported by several others (such as those at NAREC, Falmouth and the Isle Of Wight). Those projects, combined with a few privately-owned Tow Tanks and University-operated test facilities, would seem to constitute a strong foundation for the consolidation of the UK’s position as world leader in tidal energy research.

However, the global scenario is changing rapidly. For example, France is already home to several sites that operate as centres for tidal and run-of-the-river devices - free from the UK’s cumbersome bureaucracy that applies to all rotary devices that are deployed within six nautical miles of the coast and in any of the other tidal flows under its jurisdiction.

Such pieces of equipment are required to be screened with a mesh of regulation size (2mm) in order to deny access to baby eels (known as ‘glass eels’ or elvers) as they make their way from the sea in order to swim upstream. The purpose of that stipulation is, ostensibly, to comply with EU Regulations - but only the UK has introduced such an extremely restrictive requirement.

Having been introduced by DEFRA, the ruling is being rigorously administered by the Environment Agency and, from 2016 onwards, financial penalties will be imposed for any infringements.

Tidal power test facilities, both large and small, have been established in numerous countries - such as Canada, Australia, Mexico and Malaysia - but what is particularly interesting (and not widely known) is the amount of research being carried out in other countries into the design of Tidal Stream Turbines and associated equipment and systems. Many of the world’s small-scale developers engage in networking amongst themselves, sharing knowledge, advice and non-confidential information in order to hasten the progress of all concerned, clearly understanding how large the market will eventually become.

Most of that research is carried out without receiving any publicity whatsoever and a lot of it is focused on investigating the feasibility of harvesting energy from water flowing at speeds that are as low as 1 m/s, as such slow flows exist throughout approximately 93% of the UK’s territorial waters and are abundant in many of the main currents of the oceans and the coastal areas of the countries of the developing world.

Obviously, those flows contain only a small amount of kinetic energy in comparison with equal volumes of water flowing at speeds that are widely considered to be economically viable (i.e. 2.5 m/s and above). However, those faster flows are to be found only in a very small number of specific locations - so their overall contribution is very limited indeed.

While the established high-profile developers (MCT, OpenHydro and Alstom, for example) continue to make the headlines and regularly receive government funding, the designers of other devices - such as Flumill, Hales, OceanMill and PowerTube (to name but a few) - are striving to improve their efficiency at those lower flow-speeds, thereby further widening the vast potential of the available resources. When the value of that approach has been clearly demonstrated, the logical progression will be the integration of tidal array transmission infrastructures with those of Offshore Wind Farms.

Owing to the latest developments in the global tidal energy industry, the UK now probably ranks fourth in the world - behind France, Canada and Japan - in terms of the general progress being made and the amount of research being undertaken. (China, which operates something of a ‘closed shop’ policy, is possibly not far behind in fifth place.)

With Japan leading the way in the application of Seawater Pumped Storage (and a number of other nations are seriously considering that concept), it would seem, in my opinion, rather wasteful in comparison to spend as much as £200m merely to check the viability of the proposed Severn Barrage scheme - a step that is presently being planned by a company in the UK.