According to North Sea Systems, CableFish will offer a survey capability that enables cable laying operations to be extended in tides up to 6 knots in strength – currents in which it is difficult to operate ROVs. 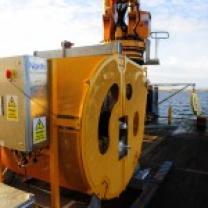 In the summer of 2014 the company reported that the first stage of the new CableFish test programme was completed and the results proved that this concept will revolutionise submarine cable installation for high flow environments.

The trials were conducted on a simulated cable off the Dorset coast in flows of up to 2.5knots. The objective was to prove the concept, including the Launch and Recovery System (LARS) all of the on-board instruments and the topside system, in a relatively benign environment before moving up to EMEC in the Orkneys.

Ben Baker, the CableFish Project Manager, said at the time: “I am delighted with the performance of CableFish. Now that the concept is proven we can focus on refining it, before setting her loose on a real cable in 6 knots flows in the infamous Falls of Warness”.

The system consists of a sensor platform that houses cameras, lights, an altimeter, a USBL beacon and a motion sensor. The platform rides down the cable to provide real-time touch-down monitoring and a full record of the installation, this includes visual imaging, positional data and an indication of the cable tension and strumming.

During four days of tests from Leask Marine’s C-Odyssey Vessel, the system’s operation in a tidal environment has been proven and high-quality survey data has been recorded of cable laying operations in up to 40m water depths, it was reported.

These records have included video footage of the cable lay at the touchdown point and cable coordinates being captured on to the vessel’s survey spread.