Nova Scotia’s Fundy Ocean Research Center for Energy is exhibiting record source data, as high as 7,000MW, with about 2,500 extractable without significant effects on the tidal range. We look at the growing need for more players and FiT dollars to commit to North America’s testing centres. By Jason Deign 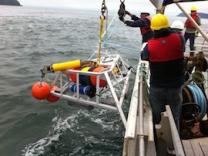 The distance between the Fundy Ocean Research Center for Energy (FORCE) and the European Marine Energy Centre is about 4,250 km as the crow flies.

But in terms of tidal turbine testing, the FORCE facility, in Parrsboro, Nova Scotia, is inching towards its more established European counterpart at Stromness, Orkney.

FORCE is quite easily the world’s second most important tidal testing centre, leading the charge for the industry in the Americas. “There have been many people involved in putting the right ingredients together to advance the sector,” says communications director Matt Lumley.

“We knew we had a strong resource, but the original estimates were about 300MW in the Minas Passage.

“Thanks to more recent and extensive data collection, as well as modelling, we now know the total potential is roughly 7,000MW, with about 2,500 extractable without significant effects on the tidal range.”

This potential, combined with a feed-in tariff (FiT) for commercial tidal projects that was introduced last November, and the first of five subsea power cables laid in December, has seen major tidal turbine companies flocking to the Canadian test centre.

"Nova Scotia is becoming a world leader in innovation for in-stream tidal turbines and other emerging technologies, and I am fully committed to advancing this industry here and around the globe," said Minister Younger. ""These regulations will help ensure the industry can invest money and create jobs to install 15 to 20 megawatts of tidal-power capacity in Nova Scotia over the next five or six years, and more in years to come."

The government worked with industry to develop the regulations for large-scale tidal developments connected to the electricity grid with a capacity of at least 500 kilowatts.

The regulations were developed after the province's Utility and Review Board set a feed-in tariff for the tidal projects in late 2013.

Just a couple months after those regulations were put in place Siemens-owned Marine Current Turbines (MCT) and its partners Minas Energy and Bluewater Energy Services unveiled in April plans to use the FORCE facility for the development of a multi-megawatt tidal array based on SeaGen F 2MW floating turbines.

The project site is leased from FORCE by Minas Energy and is located in the Minas Passage, Bay of Fundy, said MCT.

And in March, Atlantis Resources, which has a strategic partnership with Lockheed Martin and is working with Irving Shipbuilding in Canada, announced it would be deploying its new AR1500 1.5MW turbine at Fundy as well as at the Pentland Firth in Scotland.

The deployment is supported with a CAD$5m grant from Sustainable Development Technology Canada. OpenHydro, the DCNS tidal subsidiary, is meanwhile moving ahead with plans for a grid-connected 4MW tidal array in 2015. A group led by OpenHydro, together with Nova Scotia-based energy company Emera, will deliver the project, which will eventually produce 300MW.

The array will consist of two 16m, 2MW commercial-scale turbines. Both commercial-scale turbines will be connected to the provincial power grid and will provide the energy needs of 1,000 customers in Nova Scotia. “On successful completion, this project has the potential to be the world’s first multi-megawatt array of interconnected tidal turbines, providing energy to over 1,000 customers in Nova Scotia,” says FORCE.

The final berth-holder at FORCE is Black Rock Tidal Power, a Halifax-based company with partners including Schottel of Germany, Tidal Stream of the UK, and Atlantic Towing, Allswater, Clearwater, Akoostix, Dynamic System Analysis and Seaforth Engineering of Nova Scotia.

Black Rock was first in the queue behind Alstom, which quit FORCE at the beginning of the year to focus its efforts on the European market. Lumley hints that attracting new players is not a problem for the centre, though.

“A lot of factors have lined [up] very recently which will move development forward in terms of Canada’s efforts in the Bay of Fundy,” he says. “We’ve got the resource, the proximity to grid, the electrical infrastructure and the FiT to create a market.”

Obermann says the company has partnered with Tribute Resources and Tocardo to develop projects at three locations, while Clean Current is due to demonstrate its turbine at a Fundy Tidal site next year.

Lastly for Canada, New Energy Corporation has received environmental permits for its 500kW Canoe Pass project. Over the border in the US, the pace of tidal turbine development is somewhat more sedate for now, although there is growing interest in the technology.

“There are only three tidal turbine developers in the US,” says a source at the US National Renewable Energy Laboratory. “They are Verdant Power, Ocean Renewable Power Corporation and Snohomish Public Power District.”

Verdant is working with a number of US research organisations, including the Oak Ridge National Laboratory and the University of Minnesota, on issues such as turbine-fish interactions and turbine array spacing.

Ocean Renewable Power, meanwhile, has been given US Department of Energy funding for a couple of projects in Portland, Maine, including a control system for a grid-connected TidGen system.

“The project has the potential to apply to a range of other tidal turbine devices,” notes the Department of Energy in its Marine and Hydrokinetic System Performance Advancement Projects listing.

Finally, Snohomish Public Power District is working with OpenHydro and has obtained Federal Energy Regulatory Commission approval for its Admiralty Inlet project. The provider has also studied potential projects in New York and Maine, according to press reports.

The North East regions of North America are no stranger to the power that water and a cross border grid network have to play in electrifying their homes and businesses. Canada on average exports between six and 10 per cent of its production to the United States. Exports are sold primarily to the New England states, New York State, and even farther afield to the Midwest, and the Pacific Northwest and California.”

The grid networks that cross the border between the US and Canada are to be admired and are an inspiration for tidal players today. According to Hydro-Québec, the power company, for example, has been selling electricity to New England since the 1980s. This US region accounts for about half the company’s exports.

“Electricity supply in New York State (open to competition since 1999) is affected by congestion on the transmission lines that connect the generating sites with the load centres. Although this supply is primarily intended for the Greater New York area, most of it comes either from western New York (Niagara and Oswego) or from the north, and from Hydro-Québec in particular.

"The power consequently flows mainly from west to east, with resulting congestion on the transmission grid. By regulation, the line that carries Hydro-Québec electricity to New York State is limited to 1,200 MW. However, Hydro-Québec can supply western New York by wheeling power through Ontario. In this way, it can help New York State reach its objectives in terms of developing renewable energies and reducing greenhouse gas emissions,” the company has stated.

While the pace for North America to come on board with tidal energy has been unhurried compared to Europe, one must also take into context the mass and long established hydro power projects, such as the Niagara Power Plant, which are already powering, for example, New York City, which according to the New School’s Climate Action Plan receives around 10% of its electricity mix from hydroelectric power (multiple sources).

Using the power of the Niagara Falls to power homes is still considered a massive engineering feat, an inspiration for the efforts of today’s tidal developers that are battling the challenging offshore and in-stream tides in return for mass, grid connected and carbon free energy.