More signs that Japan is signing up to tidal power 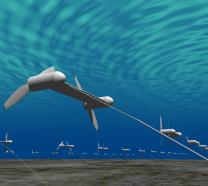 The project is part of a larger $501m investigation and implementation of sustainable, renewable energy for the island nation.

The specific location for the system and its generating capacity are not immediately known, it has been reported.

The system includes power generation devices that each have two counter-rotating turbines. Each unit is anchored to the sea floor and floats like a kite carried and driven by the ocean current, according to Toshiba.

IHI, a heavy equipment manufacturer, that produces a multitude of products including marine propellers, is a logical choice for the research with Toshiba being a widely-recognised electronics manufacturer.

“IHI is the lead company in the project and will manufacture the turbine and floating body,” said Toshiba and IHI in a joint press release. “Toshiba will supply electric devices, such as the generator and transformer.”

After concluding the formal contract with NEDO, the companies will conduct demonstration research of a turbine system driven by the ocean current, it was reported.

IHI and Toshiba, alongside the University of Tokyo and Mitsui Global Strategic Studies Institute, have conducted R&D financed by NEDO’s “R&D of Ocean Energy Technology – R&D of Next-Generation Ocean Energy Power Generation (Underwater Floating Type Ocean Current Turbine System)” since fiscal year 2011. The demonstration research is based on their achievements to date.