Minesto, a developer of the Deep Green, tidal power kite device, has signed a Memorandum of Understanding (MoU) with Florida Atlantic University. 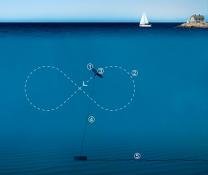 The purpose is to examine the technical, environmental and economic feasibility to install demonstration and commercial power plants in the Florida current.

Florida Atlantic University (FAU) is home to the Southeast National Marine Renewable Energy Center (SNMREC), a federally-designated U.S. research and testing centre with the mission to help accelerate the commercial realization of marine renewable energy recovery, with a preliminary focus on the Gulf Stream. By executing this MoU, Minesto and FAU aim to develop a partnership with cooperative mutual research, testing, and educational activities.

“It is truly exciting that we now will have the opportunity to explore the potential for Deep Green in the low velocity ocean current in the US,” said Anders Jansson, CEO of Minesto.

The ocean current market is huge and unexplored; according to the US Department of Energy the Gulf Stream can supply nearly 30% of the power consumption in North Carolina, South Carolina, Georgia and Florida, which is up to 163TWh electricity. In monetary value that’s equivalent to $15bn per year in sales of electricity, according to a news statement.

“SNMREC is preparing unique testing facilities located in the Florida Current, where Minesto has assessed the ocean current resource to be favourable for Deep Green”, said Anders Jansson, CEO of Minesto. “SNMREC are experienced in resource modelling, marine measurements, environmental assessments and regulatory framework helping Minesto to accelerate potential development in the US.”