Industry ponders best use of ROVs

Remotely operated underwater vehicles (ROVs) are a key tool for tidal operations, but their cost means developers need to think carefully about how to get the best value from them. 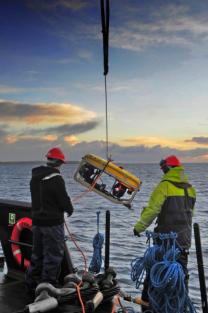 A garage on the seabed is one of the innovations being considered among moves to reduce the cost of remotely operated underwater vehicles (ROVs).

The vehicles, which are traditionally attached to a vessel via a tether or ‘umbilical cord’, are important for many undersea operations and maintenance (O&M) tasks.

However, their value to the tidal industry is hampered by their high cost and the extent to which they can operate in strong currents.

Allowing ROVs to operate from underwater garages, instead of launching them from vessels, could double the amount of time they can carry out tidal turbine surveillance and maintenance work, according to a study completed earlier this year.

The research, carried out by the European Marine Energy Centre (EMEC) in Orkney with funding from the Scottish Government, focused mainly on the use of small vessels for tidal operations and maintenance.

But use of ROVs was among the other cost-saving initiatives studied. “We did some experimentation with getting remote-operated vehicles onto the seabed,” says Neil Kermode, EMEC’s managing director. “These are inspection-class ROVs: filing-cabinet-sized units. Trying to get this stuff in and out of the sea is not easy, so there was an idea to use a form of garage, which basically you lower onto the seabed. You then allow the ROV to go out from the garage rather than having to be flown from the boat.”

He continues: “The advantage that this gives you is that you don’t have the drag on all the umbilical cables running up through the water, so the ROV is powering itself around rather than dragging a lot of string around.

“They made it work, and that doubled the amount of time the ROV could remain on the seabed, going from 30 minutes to an hour.”

Such an increase may not seem significant, but it can be very important when other factors are taken into account. If a maintenance job is not completed, for example, it may be impossible to return to the device for days or even weeks if the weather worsens.

In the meantime, the developer needs to pay to have the ROV and its attendant vessel on standby, costing money. And if the maintenance job is significant, then the passing of time could spell lost revenues or even increasing damage to the turbine.

“Doubling ROV time, the utilisation of the asset, I think in itself is significant and a useful step forward,” Kermode says.

The inspection ROVs used in the EMEC study are cheaper than the car-sized work-class units used frequently in the oil and gas industry.

But the cost for these inspection machines is “still seven figures,” according to Rob Grimmond, owner and chief executive officer of Offshore Marine Management, a UK contractor with wide experience of subsea operations. And that poses a problem for the tidal industry.

Since ROVs cannot operate in flows of more than about three or four knots, the amount of time they can spend on tidal turbine maintenance tasks is extremely limited, even bearing in mind that many have propulsion units that allow them to be on station in a matter of minutes.

Hence it is critical that undersea maintenance in general is kept to a minimum, and that any tasks that have to be carried out can be done so as efficiently as possible.

Grimmond is concerned that such considerations may not have been sufficiently high on turbine developers’ design agendas. “The challenge for the tidal industry is trying to design a machine that is self-fixing or allows for easy ROV maintenance,” he says.

“With these designs that are coming through, you can see they are not from ROV companies. They need maintenance routines of two or three hours a day. In this environment, you might get five minutes of ROV operations in a three-hour job.”

Examples of how poor turbine design could increase ROV costs include having limited access to items that need frequent maintenance, or using non-standard bolts, screws or other components.

Essentially, turbine designers need to view any ROV-based maintenance task as a race against time. Anything that could cause a delay has to be eliminated at the design stage. It does not help, Grimmond says, that current turbine designs are all more or less unique.

“In wind, there is only one type of machine, whereas in tidal they are all different, so will have different maintenance requirements,” he points out. “The O&M of these machines needs a rethink.”

In the meantime, his company is looking to come up with its own answer to the challenge of keeping ROVs operational for longer on the seabed. “Offshore Marine Management is building and designing a crawler ROV to work through tides,” he confides.

“We’re putting a lot of weight on the ROV. If it is heavier the tide won’t affect it.”

And with new innovative vessels in the market-- that can only lead to taking a load off many developers’ minds.