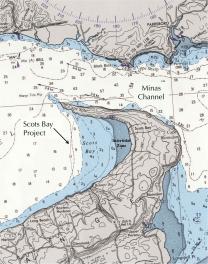 Halcyon Tidal Power, a US developer, is pulling out all the stops to gain local community backing for a 1,100MW lagoon in Nova Scotia, Canada. The proposal is to build a 10-kilometre barrage in Scot’s Bay (also spelt Scott’s or Scots Bay) in the Bay of Fundy.

“We would expect to begin the process of securing an option to lease the marine site later in 2014,” says Halcyon’s president, Ted Verrill.

“Once the option is secured, we would propose various environmental, socioeconomic, engineering and other studies subject to government review, that are necessary to confirm the effects of constructing and operating the project.”

Around two years hence, he adds, “we would expect to secure a final marine lease and begin construction in of the project in 2018-2019, culminating in a 2021 start-up.”

So far, efforts to drum up support for the USD$3bn Scot’s Bay project, which will feature 300 Alstom turbines, have met with a muted response.

“There were more questions than answers when Halcyon Tidal Power came to town,” noted the Kings County Advertiser, a local paper, after Verrill and Halcyon chairman Dr Ramez Atiya aired their plans at a meeting with 250 community members in February.

Verrill confirms that “we are in the early stages” and “our consultative and outreach efforts will continue for the foreseeable future.”

Nevertheless, he adds, the company has already held talks with the Nova Scotia Departments of Energy and Natural Resources, the Estuarine Institute at Acadia University, the Fundy Ocean Research Center for Energy, and local public, aboriginal groups and businesses.

“The benefits of the project will accrue to the local residents of Scot’s Bay, the Mi’kmaq peoples, the citizens of Nova Scotia, the Canadian Maritimes and the north eastern United States,” asserts Verrill.

These benefits, he says, should include significant direct and indirect employment opportunities during development, construction and operation, along with income from taxes, fees and other revenue streams plus “substantial increases in tourism and tourist dollars.”

In addition Halcyon is touting the potential for market-priced power until financing for the project is amortised, then below-market-rates energy for the remaining 100 years of or of the plant’s lifespan.

The barrage will be “a tidal range project paradigm that is exportable to many parts of the world and a means of reigning in carbon emissions on a large geographical scale,” emphasises Verrill.

Anticipating concerns over silting up of the bay, Halcyon is proposing to use a patented two-way generation plus pumping concept that will maintain tidal flows and intertidal zones.

Furthermore, Verrill says: “We do not expect significant fish kill either from physical strikes due to various turbine modifications, or from fish bladder damage due to severe changes in water pressure gradients due to turbine speed attenuation.”

In February, Atiya told community members that fish measuring under a metre might have a 70% survival rate for a single pass through a turbine.

Verrill continues: “We have every expectation that we will develop, construct and complete the Scot’s Bay tidal range lagoon power project.

“The efforts that we are extending for our tidal range power project in Cobscook Bay will lead to many projects currently on the drawing board for deployments in other parts of the world.”

Nevertheless, clarifies Andrew Younger, Nova Scotia’s Minister of Energy, at the time of writing, “the Province has no association with this project. There is currently no application or formal proposal before any provincial department for this project.

“We are neither promoting it nor pursuing it at this time. Halcyon, like any company, is free to propose any project they wish. To obtain an approval there are many steps Halcyon would need to take, including a robust regulatory process involving provincial and federal regulators.”

Younger highlights the need to undergo a full environmental assessment at federal and provincial level. “Halcyon will also need to find a customer for their power, which I understand they do not have,” he comments.

“The Nova Scotia Department of Energy will closely monitor Halcyon’s interactions with the community as well as feedback on this project. We have met with the company to discuss the project and we outlined the steps that need to be taken for such a venture to proceed.”

A final hurdle for Halcyon could be funding. At the beginning of the year, Nova Scotia announced new regulations ‘that will help developers invest hundreds of millions of dollars to build a new renewable industry in the province,’ according to a press announcement.

The rules are specifically aimed at fostering large-scale tidal developments, with a capacity of at least 500kW. However, says Younger: “The project would not be eligible under the renewable-to-retail regulations because it is not an EcoLogo-certified technology.”

To better gauge the viability of this proposed project, especially the turbine's design effectiveness in the water and along the site, more dialogue will be required among marine energy consultants on both the engineering and environmental sides of the coin. Then of course a formal application to the provincial government must be made, by which time more details of the proposed technlogy should be known. We await on all fronts to see how this project, whether accepted or not, shapes other projects in the region and the wider supply chain.