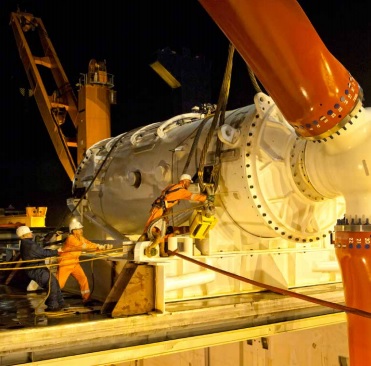 The funding will accelerate development for MeyGen Phase 1B (Project Stroma), part of the MeyGen project which plans to install 398 MW of total capacity off the north coast of Scotland, Atlantis said October 16.

MeyGen Phase 1B is now expected to reach financial close during 2016.

A first tranche of the EC funding, some Eur10 million, will be released to the project on April 1, 2016.

Atlantis applied to transfer the funding after it acquired in April Marine Current Turbines group (“MCT”), developer of Kyle Rhea.

The EC funding is part of the NER 300 program which supports innovative renewable energy technologies.

Aberdeen based Hydro Group has won a contract to supply the complete export connection system for one of the tidal turbines on Atlantis Resources' Meygen phase 1A project in northern Scotland.

The Meygen 1A project involves the installation of four submerged turbines generating 6 MW and construction of onshore infrastructure, as a key step towards a planned 398 MW tidal array at the Pentland Firth site.

Atlantis Resources, 86% owner of the MeyGen project company, has selected Hydro Group to supply the complete export connection system for one of the tidal turbines, and is currently finalising details for the second phase of the project, Hydro Group said November 4.

Under the agreement, Hydro Group is providing a single housing for a hybrid with a power output of 6.5kV, incorporating the power and communication connection system, mechanical loading system, and fibre optic and instrumentation lines.

Meygen phase 1A is expected to start producing power to the grid in 2016.

Scottish wave power developer Aquamarine Power has called in administrators to seek either a sale of the firm or new investment, it said October 28.

Aquamarine Power has been testing its full-scale Oyster wave energy machines at the European Marine Energy Centre (EMEC) in Orkney.

"Whilst the company has seen many successes over the last few months, including securing a Eur800,000 ($859,184) grant from the EU as well as a GBP2 million ($3.0 million) contract from Wave Energy Scotland, the economic climate has significantly affected the business. The lack of private sector backing to supplement public funding support placed the company under cash flow strain and the directors concluded the best prospect of concluding a transaction was via the protection of administration," BDO's Stephen said in a statement.

"We are continuing discussions with interested parties who were in discussions with the company prior to our appointment and are working closely with the Aquamarine Power board to engage with other potential purchasers," he said.

Canada's Blackrock Tidal Power (BRTP) has secured CA$10.5 million ($7.9 million) in private equity to develop its TRITON tidal energy platform and has set up a special purpose vehicle (SPV) which will acquire the platform once fully commissioned.

The equity investment will be leveraged by an additional commercial loan of CA$4.5 million as the company pursues its development in the active Nova Scotia region.

Canada's Inerjys Ventures is the leading private equity investor, and others include shareholders of the SCHOTTEL Group and Singapore-based clean tech investor Envirotek.

TRITON is a floating platform carrying a number of SCHOTTEL Instream Turbines that generate up to 2.5 MW from tidal currents.

The device is planned to be installed in autumn 2016 at the BRTP berth at the Fundy Ocean Research Centre for Energy (FORCE) in Nova Scotia.

"The electricity generated will be fed into the North American power supply system and the SPV will operate the device over the fifteen years duration of the FIT," BRTP said in a statement October 20.

Earlier this year, the Utility and Review Board of Nova Scotia approved separate FiT rates for the Testing and 15-year Developmental stages of tidal projects.

In December 2014, four developers received approval through the Nova Scotia FiT Program, for a total of 17.5 megawatts (MW) of electricity: