Divers are taking care of a large share of essential sub-sea operations, it is important for the industry to make sure diving tasks are as easy, and safe, as possible. Their safety and successful operations are part and parcel towards tidal power commercialisation. 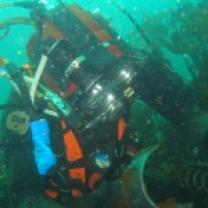 The tidal industry needs to keep an eye on diver safety to stand a good chance of commercialisation, experts have claimed.

Accidents involving divers at tidal sites could lead to restrictive regulations and dent investor confidence, believes Rob Grimmond of Offshore Marine Management. “It’s going to make it very hard to get these machines into the water,” he says.

He continues: “And any delays are going to add cost to the installations and knock investor confidence.”

The warning comes as the diving community prepares to take on a growing share of tidal operations and maintenance tasks.

“We’re just waiting for them to take the next step. We’re looking forward to the first arrays.”

Bethwaite confirms his company has “dived on virtually every device” at EMEC, working with tidal leaders including Andritz Hydro Hammerfest, OpenHydro and Voith Hydro.

Divers are used for a wide range of tasks, from routine inspections and maintenance to clearing marine growth off blades.

Although some of these jobs can be carried out by remotely operated underwater vehicles, the machines are much more costly to use, not least because they may have to be deployed from a dynamic positioning (DP) vessel.

“Each time you have a DP ship you are looking at half a million per operation,” claims Bethwaite.

So far, the tidal industry has yet to record a significant diver-related incident. But the offshore wind sector has suffered a number of diver casualties. Three divers have been killed in German offshore wind farms since 2010.

The latest fatality, a year ago, involved a 26-year-old British diver, Richard Wilkinson-Lowe, who was crushed by a concrete mattress while working at night at a depth of 20 metres within the 108MW Riffgat wind farm.

The death sparked calls for safety improvements from professional diving bodies. Aware of the risks its divers face, Leask Marine, for one, has invested heavily in safety precautions.

Leask Marine is also a member of the Association of Diving Contractors (ADC) and its supervisors are certified through the ADC supervisor scheme. “We’re looking to invest in increasing our safety,” Bethwaite says. “It’s paramount to us.

“When operating on the sites, we have a fully containerised decompression chamber, which has just been refurbished, on the vessel.”

The UK seems well placed to lead in tidal diver safety best practice thanks to the quality of its certifications, according to Steve Grindrod, non-destructive testing training manager at The Underwater Centre, which runs a commercial diver training centre at Fort William in Scotland.

For tidal work, he says: “Qualified divers from construction, fabrication and mechanical-type backgrounds would probably be the best, but specialised training will still be needed.

“HSE [Health and Safety Executive] qualifications, which can only be gained in the UK, are probably still the most widely respected and accepted around the world, though there are quite a few other qualifications.”

He adds: “The only underwater inspection qualifications presently available for divers are issued by the Certification Scheme for Weld Inspection Personnel, the certification arm of The Welding Institute, based in Cambridge, UK. They are exclusively offshore biased.”

However, Grindrod points out, this specialist training is intended for offshore oil and gas, not renewable energy generation structures. And training can only go so far. When it comes to safety underwater, nothing beats experience.

This could pose a problem for tidal developers as the need for diver support grows, particularly with qualified divers being courted by the oil, gas and offshore wind sectors.

“Experienced divers are thin on the ground and getting thinner as the older people leave the industry, taking their experience with them,” Grindrod laments.

“We can train people to do these jobs but we can’t give them the experience they need to do them as effectively as someone with 10 or 20 years of experience.”

At Leask Marine, which has around 20 divers from a total staff of 40, Bethwaite says there is still no shortage of talent to tackle undersea work for the tidal industry. “At the moment the supply and demand is pretty well levelled out,” he says. “I have CVs coming through all the time.”

For that to remain the case, though, it will certainly help if the tidal sector, along with other marine renewable industries, can keep a clean record on diver safety.

Says Offshore Marine Management’s Grimmond: “One diver told me: ‘We hate wind, waves and tides. And you are asking us to build an industry in those conditions.’”