Tidal Lagoon Power, the company behind the pending £850m tidal energy lagoon generator in Swansea Bay, is looking at Colwyn Bay as one of five potential sites where it could locate its next lagoon, it has been reported. 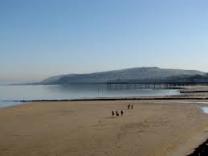 The company hopes to produce 10 per cent of the UK's energy supply, via five lagoon sites based throughout the country.

The Swansea Bay project will involve the building of a 9.5km sea-wall, capturing tidal energy.

According to a report by North Wales Pioneer, a spokesperson for Tidal Lagoon Power said plans were still in "very early days" but response from Colwyn Bay was encouraging.

Company representatives have expressed that Colwyn Bay is one of five lagoon sites that it is looking at, and it is possible that it will follow Swansea Bay to become its second lagoon.

"We are encouraged by local support, from both businesses and on a political level, where there seems to be a desire for us to bring tidal power to Colwyn Bay," the spokesperson was quoted in the news report.

The company first began its work on the proposed Swansea Bay Tidal Lagoon three years ago. In that time, it has consulted with more than 200 local stakeholders and over 100 statutory consultees.

“We have met over 1,050 local people and some 2,500 local people have completed formal questionnaires on the lagoon,” said Mark Shorrock, Chief Executive of Tidal Lagoon Power, in a statement this month. “Eighty six per cent of the local community support our proposals and local people have invested £400,000 in the project via the community share offer.”

Shorrock said that the “ambition and encouragement of the people of Swansea Bay has been a significant driving force behind the project”, which is an indicator that local support could be a major deciding factor for its choice in the next lagoon site.