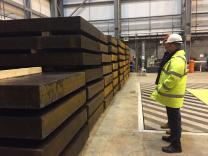 The 18-meter rotor diameter AR1500 turbine, scheduled for delivery in 2016 for the Phase 1A of the MeyGen tidal project in Scotland’s Pentland Firth, will be one of the largest capacity single rotor turbines ever built, according to Tim Cornelius, Atlantis Resources’ CEO.

What has set MeyGen apart in the burgeoning tidal energy project market is that it was one of the first tidal projects in the world to secure the necessary planning consent, lease agreement, grid connection and power purchase agreement to begin onshore and offshore construction.

Once completed, the MeyGen project – the world’s largest tidal stream project under development – is expected to deliver up to 398 megawatts of power, enough energy to power 200,000 homes. The MeyGen project will contribute to Scotland’s goal of 100% renewable energy by 2020.

Chancellor of the Exchequer, George Osborne, has classified the tidal energy sector as an asset class, a positive outlook, says Cornelius, regardless of which political party wins in the May elections.

Secretary of State, Edward Davey, said at the 2014 Tidal Energy Summit that, because successive Governments have believed in tidal power, it has so many opportunities.

“We have put in place arguably the strongest policy framework of support anywhere in the world. And it is this framework that attracts the best scientific minds, the best engineers working in the field. And has attracted at least some of the capital investment needed,” he told the audience.

“With us acquiring the MeyGen project, and receiving full consents to begin construction of the project’s first phase, it has been an amazing 12 months of growth for Atlantis,” says Cornelius, following the Lockheed construction contract announcement.

The plan is for Atlantis to get the AR1000 and AR1500 turbines into Scotland’s waters and onto its grid. In Phase 1A of the project, four submerged turbines generating 6 MW will be installed in the Inner Pentland Firth just north of Caithness, with first power expected to be delivered in August 2016.

The project, which will support a further two turbines in the Pentland Firth will increase the capacity of the tidal array from 6 to 9 megawatt, enough to supply power to 4,500 homes.

The PPA will guarantee revenue for the project, both for the electricity supplied to the grid and the 5 Renewable Obligation Certificates that the project will receive for each Megawatt Hour of electricity generated.

The company will also deploy the AR1500 in its Bay of Fundy project in Canada. However, schedules had not been determined at the time of writing.

Cornelius says that there is a “dislocation of the share price to the company’s intrinsic value”. That value is still around the £72m mark, according to Cornelius.

“Atlantis is an undervalued growth story. Our intrinsic value has been highlighted to shareholders through our demonstrative milestones,” says Cornelius.

“Commitment of construction can only raise the project finance profile of tidal power,” he says, highlighting that the outlook for offshore tidal power has never been better due to the offshore skilled workforce of the oil and gas industry looking for new employment.

Cornelius says that as more turbines and projects come online to the grid, the predictability of tidal power will be especially attractive compared to other renewable power sources.

The movement of the tides can be accurately forecast for many years into the future, something that other renewable sources, such as solar and wind, cannot as accurately claim.

“The predictability of tidal power is attractive to investors. We expect more commercial funding will be attracted to the sector as more projects are constructed,” he says.

Attracting investors for the long-term

When asked his thoughts on the impact of the UK’s proposed tidal lagoons on the non-barrage tidal sector, he said the barrage infrastructure play also had its part in the UK energy mix, especially from a long-term investment standpoint, since it could offer stable pay-outs, once generating power, to institutional investors, such as pension funds.

The Offshore Renewable Energy (ORE) Catapult, the UK's flagship technology innovation and research centre for offshore wind, wave and tidal energy, stated in a November 2014 report on funding options for wave and tidal energy projects that tidal power was starting to meet the investment criteria that commercial entities require.

The report stated that the long-term investment time frame of pension funds is well suited towards investing in this type of project.“Other types of institutional investors that require higher liquidity/shorter time horizon for their investments, such as energy-specific investment funds and the large Japanese investment conglomerates, are starting to look at the wave and tidal supply chain for investment opportunities.

One unnamed analyst that is offering a 12 month price target, expects Atlantis Resources Ltd share price to rise to 108.00 in the next year from the last price of 27.50 (Financial Times, April 2, 2015).Year on year, growth in earnings per share excluding extraordinary items has increased 35.38%. And its year on year revenues grew 106.11% from $S3.003m to $S6.190m, while net income improved from a loss of $S14.974m to a smaller loss of $S9.676m, according to company reports and analysis by the Financial Times.

In February 2014 the company listed on London’s Alternative Investment Market, when it raised £12m by selling about 12.8 million new shares at 94 pence. At the time of the listing, Atlantis was valued at £72m. The company’s market capitalization as of April 3, 2015 was £24.53m (Bloomberg Business).

Most investors at the time of the 2014 listing were London-based institutions, with some from continental Europe, Cornelius said. Morgan Stanley, which had 45.7% before the placing, did not sell shares.

The Phase1A MeyGen project is fully funded to the tune of over £64m, which in addition to turbine manufacturing, assembly, subsea cabling and grid connection, also includes the substation costs.

Signing up with Lockheed Martin, a company with a market cap of $62.8bn, has enabled the MeyGen project to have a flexible, integrated supply chain given Lockheed’s global presence and purchasing power, notes Cornelius.

“Between 50% and 60% of fabrication, assembly technical commissioning and construction will be conducted by a UK supply chain. Scotland manufacturing through 2015 should mean an end of year delivery on the production side,” says Cornelius.

MeyGen chief executive Dan Pearson, says one of the key things about the Pentland Firth is that “although it’s a low GDP area it does have an excellent pedigree in relation to energy projects, such as Dounreay, and oil and gas fabrication. Although the population isn’t huge, the engineering expertise is good.”

The massive drop in oil and gas prices and the impact on offshore exploration has offshore vessel companies scampering for new work, helping to create a more competitively priced marketplace, says Cornelius.

Vessel costs and day rates have come down drastically (capex 25% to 50%), which is the upside story for tidal projects, he says.

Oil prices are expected to remain weak and volatile through 2015, with aggregate E&P capex down around 25% year/year (y/y).

In March 2015, contractors began horizontal directional drilling operations at the MeyGen site in Caithness, to create the bores for the cables which will link the onshore site at Ness of Quoys with the four subsea turbines.

Each of the four bores will be approximately 550m long, and is designed to contain a 4.4kV cable through which tidally generated energy can be exported from the turbines to the onshore grid connection.The drilling is expected to take four months and will be carried out by Manchester-based O’Connor Utilities Ltd.

Construction works have been underway at the onshore site since January 2015 to prepare the necessary infrastructure for this important phase of the project. ABB has been responsible for civil works and onshore electrical equipment supply.

Construction of the first phase of the project is expected to take place throughout 2015 and 2016, with first power being delivered to the grid for sale in 2016.

Pearson is confident that the project will help put recent marine energy troubles in perspective. “I went through the wind industry a number of years ago, where we saw similar things,” he says in an interview with Tidal Today earlier in the year.

“We saw OEMs merging or OEMs walking away, but also some OEMs really taking on the mantle. What we are seeing with the MeyGen project is hopefully a catalyst for proving that the sector has got great potential.”

Atlantis owns a portfolio of patents and patent applications relating to tidal power generation and sells tidal generation equipment and engineering services to third party developers as well as its own projects.

In April 2014 Atlantis Resources extended its partnership with China’s Dongfang Electrical Machinery with a new testing agreement offshore Hangzhou.
The testing programme was set to be carried out before Atlantis's first commercial scale, 1MW turbine, the AR1000, was launched in late 2014 at an offshore demonstration project in Zhejiang Province.
Cornelius said at the time of the agreement that strategic partnership with Dongfang was “significant” for Atlantis given the potential size of the Chinese tidal power market.

In addition to helping to develop Atlantis’ supply chain and to identify sales and project development opportunities in China, the agency agreement was expected to have a near-term positive impact on the tidal turbine developer’s cash flows through a commission on the sale of any product or service secured by Dongfang from an Atlantis initiated opportunity.

The duo have also agreed to cooperate on supply chain solutions for the 1.5MW AR1500 turbine when it enters mass production.

Atlantis has now also agreed to sell Dongfang's non-tidal products in markets outside of China, illustrating how the company is looking at new ways to bring in cash flow as it builds up the MeyGen project and others in Canada and elsewhere.

In 2014, Atlantis was considering France as a potentially new project market, but when Tidal Today asked if any of those plans had materialised, Cornelius said that nothing had been set up.

Building the largest tidal development in the world, is keeping him the business busy as it is, he says.