Iberdrola will harmonize PV plant layouts and use common build strategies to minimize costs in a massive simultaneous construction initiative in western Spain. 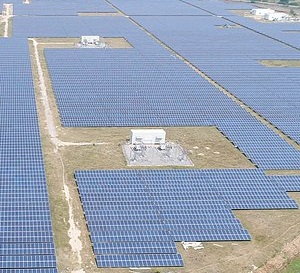 Built within a year, the 290 million-euro ($315.5 million) project is Europe's largest solar facility. Located in Usagre in the western region of Extremadura, the project site spans an area of some 2,470 acres (1,000 hectares) and includes 1.43 million solar panels, 115 inverters and two substations.

Construction group Eiffage Energia was the lead EPC for the project. Supply contracts were signed with 30 companies, many of them local, for a total value of 227 million euros.

Spain connected a record 6.5 GW of renewable energy to the grid in 2019, up from just 330 MW a year earlier, according to figures from national grid operator Red Electrica. The country is forecast to install 3.5 to 4 GW/year of new capacity in the next five years, according to SolarPower Europe.

The Nunez de Balboa plant is due online this quarter and Iberdrola plans to install more than 2 GW of PV capacity across six projects in Extremadura over the next two years and a further 1 GW in Spain's other regions.

The explosion of activity in Extremadura will severely test construction and logistics capabilities in the region. At peak construction, Nunez de Balboa involved some 1,200 workers, many of them local.

Iberdrola will use a common construction strategy across all the projects, using different subcontractors, suppliers and management teams to build in parallel, a company spokesperson told New Energy Update.

"It is planned that at least six projects will be built simultaneously," the spokesperson said.

As demand for renewable energy grows, solar developers are stacking multiple offtake contracts to build large projects that benefit from economies of scale. As a power utility, Iberdrola also benefits from a large retail customer base.

The 500 MW facility is expected to produce 832 GWh of power per year and Iberdrola has signed long-term power purchase agreements (PPAs) with Kutxabank, telecoms group Euskaltel and supermarket group Uvesco. The remainder of the power will be sold to retail customers or the wholesale market.

UK-based developer Solarcentury is currently building the 300 MW Talayuela Solar Project in Extremadura and the 200 MW plant near Seville in Andalusia, both without subsidies. Spanish construction group Prodiel will build both plants.

“There’s a sweet spot at which the sites are large enough to realize economies of scale on construction but not so large that you need to negotiate with an unmanageable number of landowners,” Tom Heggarty, global solar power analyst at Wood Mackenzie, said.

After recently completing Nunez de Balboa, Iberdrola plans to start construction of its 150 MW Campo Aranuelo complex in Extremadura in "early 2020." The company's other PV projects in Extremadura include Francisco Pizarro (590 MW) in Torrecillas de la Tiesa, Ceclavin (328 MW) in Alcantara; Arenales (150 MW) in Caceres and Majada Alata and San Antonio (50 MW each) in Cedillo.

Iberdrola expects economies of scale from replicating engineering design across similar plants in Extremadura, such as the layout of fixed structures and trackers, the company spokesperson said. The technology and plant size depend on factors such as site conditions and grid capacity.

The simultaneous construction of so many projects is a significant logistics challenge for Iberdrola and its construction partners.

To mitigate risks, Iberdrola is working with partners in advance of construction to optimize the shipment of components from factory site, the spokesperson said.

Large projects also provide significant economies of scale during the operations and maintenance (O&M) phase which can be further increased through new technologies.

Other solutions include automated systems and remotely operated technology such as drones, which offers greater benefits across larger plants.

Red Electrica has committed to invest 110 million euros in the Extremadura grid to support 10 GW of new renewable energy capacity in the region by 2030. The grid operator will submit a wider national grid development plan to government later this year.

A smooth permitting process in Extremadura has also helped to support the fast plant build, Iberdrola said. This will need to continue for developers to meet project deadlines.

There are currently 154 PV projects under development for a total capacity of over 8.2 GW, according to the regional government.

"The numbers show that what was expected has already become the reality,” Garcia said.