Small-scale, industrial CSP has maintained a presence on the periphery of global CSP development for years. But in recent months, it appears to have gained an increasing presence with a series of new commercial installations. 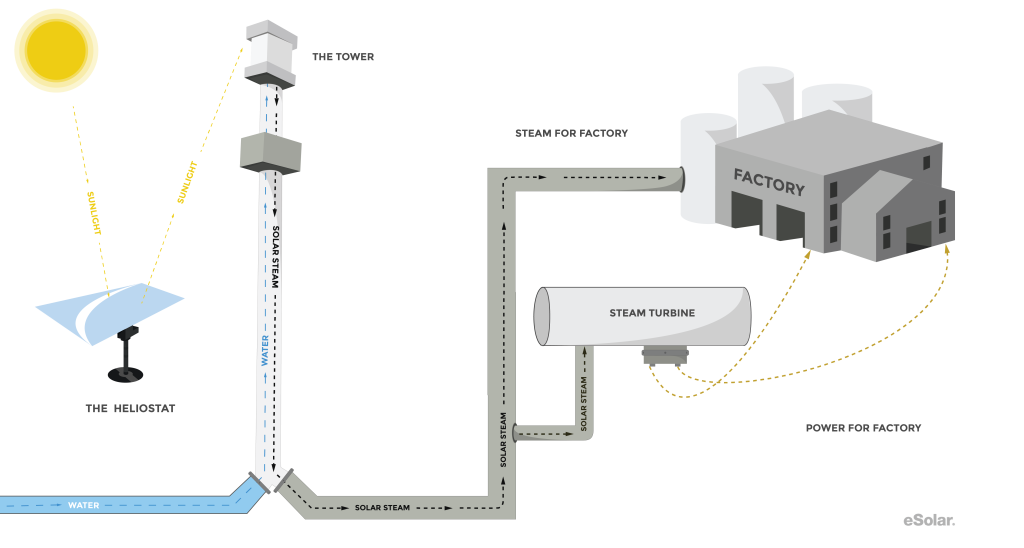 In the last year alone, Pirelli revealed it was building a 1.4 MW parabolic trough plant to produce steam for its tyre factory in Brazil; Cascades announced the construction of a thermosolar power plant at its pulp and paper factory in Quebec, and South African telecom giant MTN announced the operation of a 330kW CSP cooling plant to power their energy-intensive data centres.

"The demand is there, industrial needs of thermal energy are gargantuous all across the globe. Much of the industrial's needs are at elevated temperatures which are not yet attainable with traditional solar thermal technologies," remarks Jacques-Alexandre Fortin, director of research and development at Rackam, the Canadian micro-CSP developer supplying the Cascades plant.

According to Bill Kolb, CSP researcher at Sandia National Laboratories, the key driver of using CSP in industrial processes is reducing the dependence on natural gas or other fuel sources. "In areas with high energy cost, CSP can be very competitive. The benefits are offset utility bills."

The range of potential CSP applications in the industrial world is almost immeasurable. Processes such as pasteurization, sterilization, evaporation, disinfecting machinery, cleaning in place, drying, curing, steam production, refrigeration, and hot water are just some of the areas where CSP would be a good fit.

"The food transformation industry is a good match for such applications, and so are the pulp and paper, mining, institutional, chemical and all off-grid installations that require thermal energy in their system," notes Fortin. Additionally, car washing, metal treatment, pharmaceutical, dairy and textile are industries where CSP technologies are already being used, and where significant savings are being made as a result.

A good example is Rackam's heat collector system installed at Chagnon Dairy in Quebec. More than 250,000 m3 of natural gas was being consumed each year, at a total cost of around $120,000. Today, roughly 100,000 m3/year is being saved and 70% cost savings achieved.

"Naturally, we're attracted to facilities that can offer us bio-waste, through cow-sheds or food processing factories, since our microturbine runs on biogas at nighttime". Aora has already built two demonstration plants, in Israel and Spain, and is currently working on a third project in India.

It may seem that all modular CSP providers offer the same technology and cater to the same markets. However, a closer look reveals distinctive business models and technology optimization strategies.

Rackam, for example, developed a MicroCSP system that they describe as a "solar boiler that uses parabolic troughs in a repeatable matrix". Parabolic troughs, according to Kolb, would perform best in industrial applications due to the temperatures needed and the footprint of the system.

"Our system can be installed on roofs or on the ground. It was developed for modular integration – compact systems that can be stored and shipped in kits in regular containers. We adopted the IKEA model with an emphasis on simplifying as much as possible the construction of the system for minimal installation and construction costs," explains Fortin.

The technology has also been designed to resist Canadian weather, including snow, which led to a system that protects itself when not in function. "Most of our construction is aluminum, therefore rustproof, durable and reusable. Our business model includes both turnkey projects and OEM partnerships."

Aora Solar, on the other hand, focuses on solar towers, each with 100kW electric capacity and 170kW thermal energy. This provides two offerings to a rural village – electric power and solar cooling. "The hot air captured at the top of the tower, can be sent via a heat exchanger, to provide water at between 80-150C," explains Susskind.

"This hot water can drive an absorption chiller, which in turn can run a cold storage or AC unit. We plan to offer rural communities electric power and the ability to store their agricultural crops en-route from farm to market."

"A typical oilfield project will be in the hundreds and thousands of megawatts of steam need, so our solar fields will be built out of multiple standard blocks. Without a standard, modular product, he stresses, it would be difficult to achieve steep cost reductions," he notes.

As CSP technologies continue to mature and costs come down, additional fundamental markets are opening up, such as EOR, an application that burns substantial amounts of gas.

"Last week, we announced that the government of Oman and Royal Dutch Shell are jointly leading a $53 million investment in GlassPoint. In no small part, that's because we solve fundamental problems with energy and expand the primary energy supply," says O'Donnell.

Indeed, the oil-rich economies of the UAE, Saudi Arabia, Kuwait and Oman all have shortages in natural gas. As much as 23% of Oman's gas is consumed at the oilfield, much of which is for EOR. The gas saved from solar EOR can be redirected to industrial development in Oman.

"The oil and gas industry is the next big thing for the solar industry," O'Donnell points out. "It's a huge user of energy worldwide in multiple forms. And there are many other examples, such as mining and petrochemical applications".

It is worth mentioning that South America's first CSP plant was integrated by Abengoa Solar into a copper mine operated by Minera El Tesoro, a subsidiary of Antofagasta Minerals.

According to O'Donnell, every unit of solar energy that goes into a CSP electrical power generation system replaces about 0.7 units of natural gas.

The exact output would depend upon the industrial process. "Industries such as dairy, food processing, textiles, and mining all use low-temperature heat, about 150°C; solar thermal EOR 300 to 350°C and power generation 400 to 550°C."

Fortin shares a similar view: "Thermodynamically speaking, it makes perfect sense to reduce to a minimum the energy conversions in order to minimize the losses due to systemic irreversibilities. Therefore, to have a direct use of thermal energy in a system allows for better overall performance compared to thermoelectric."