CSP vs. PV - A Financial Comparison

It has become accepted that PV represents a cheaper alternative to CSP in terms of initial CAPEX investments. However, what is the financial return like in the long-term? 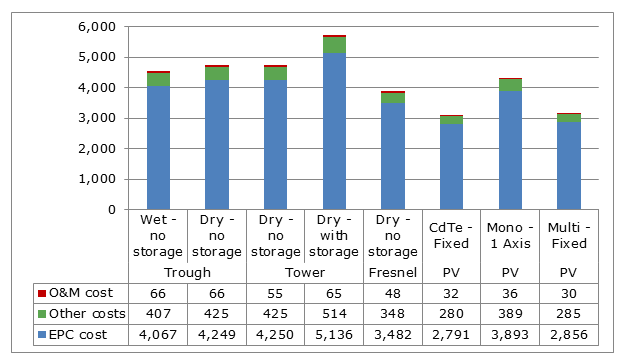 CSP today investigates a detailed financial comparison between PV and CSP, taking into consideration aspects such as actual cost of electricity produced, plant size, O&M and TES in order to determine which type of energy plant provides better return on investment.

Previously, CSP Today compared CSP and PV focusing exclusively on the Levelised Cost of Energy (LCOE). In this article a more detailed analysis of the costs associated with the two types of energy plants is examined with the aim of revealing further elements that investors and developers could take into account.

The LCOE is defined by a wide range of costs occurring along the whole value chain of a solar energy facility, as shown in Figure 1 [1]. A broad classification of such costs includes:

- Operational costs (or O&M, indicated as OPEX), and

- Financial costs (in some analyses included within the investment costs).

The capital costs vary according to a wide range of factors including the specific technology and configuration of the plant, land acquisition cost, financial cost of the capital and the transport or import cost associated with the supply chain. Likewise, the amount of solar resources available and the market conditions (such as ownership and PPA agreements) will affect the overall economic performance of the plant [2].

Higher capital costs are not automatically related to higher LCOE. This can be particularly true for CSP plants where the initial investment can account for approximately 80% of the total cost of the project [1]. For example, the construction of Thermal Energy Storage (TES) can imply higher investment costs but it increases the capacity factor of the plant therefore positively impacting the LCOE [3]. The resulting profitability is shown in the below graph.

Furthermore, when increasing the plant capacity, the relatively lower cost of components will contribute to a lower LCOE as larger components tend to be proportionally cheaper (i.e. doubling the turbine size from 50 MW to 100 MW will not double the cost, but increase it by 60-70%) [3]. Additionally, suppliers may be able to negotiate better prices due to higher volumes. O&M costs are thought to benefit from economies of scale, particularly as the OPEX falls as the plant size is increased. However, the exact value is difficult to determine as new issues could arise post-operation, impacting the O&M costs [3].

According to a study carried out in the CSP Today Parabolic Trough Report: Cost, Performance and Key Trends, 2013, the optimal size of a CSP plant needs to be a balance between maximum scale-up cost benefits and minimal drawbacks. Potential drawbacks could include greater thermal and pressure losses due to parasitic consumption and more pumping which leads to greater electricity use in larger plants. According to the study (represented in the below figure), the optimal CSP plant is 220 MW gross, which leads to a LCOE reduction of 6-8%.

Scientific literature and market sources still give quite a wide range of estimations when it comes to the cost of CSP plants, partially because this technology quite new, many details have not yet been disclosed as they are still considered commercially sensitive. On the other hand cost trends are reasonably dynamic (as is normal for any non-mature technology) because continuous innovation reduces costs in parts of the value chain.

For example, the Nevada Solar One parabolic trough plant completed in 2007, reported capital costs of approximately $4,100/kW installed [2]. An international report published in 2012 [8] collects various cost estimations summarised in Table 1. Alongside CSP and PV (which are the main foci here), other technologies are displayed in the figures and tables of this article just to facilitate wider comparison.

The numbers reported above indicate that CSP capital costs can be between 1.91 and 5.73 times higher than that required by a PV plant. Therefore, the availability of capital might influence a choice between investing in a PV rather than a CSP project. However the final energy costs (column 4 of table 1) appear to be in favour of CSP plants. A possible explanation of this could be the benefits of CSP-specific technologies. For example, increasing the storage capacity in CSP plants by up to nine hours can reduce the LCOE by approximately 3% [3].

Research carried out in Greece in 2012 [4] reports other cost estimates shown in Graph 1. As anticipated, different values are not a surprise: not only are they expressed in a different currency but also because they are based on a combination of different parameters and assumptions.

In Graph 1 PV and CSP are also compared with wind offshore and biomass CHP. PV technology is the cheapest of the four alternatives, whereas CSP is the most expensive. Translated in numbers, CSP is 3.28 times more expensive than PV, which is in line with the range identified above in Table 1.

However, again the researchers arrive at the conclusion that regardless of the higher investment costs required by CSP, the average cost of electricity produced by Solar Thermal Electric technology is the cheapest (Graph 2) [4].

It is interesting to note that whilst comparing Wind Offshore and PV higher capital costs are associated with a higher cost of electricity (Wind Offshore is more expensive in both cases). CSP gives a different result: capital costs of CSP are higher, but eventually the average cost of the electricity generated is lower.

The analysis of the capital costs (EPC cost + other costs) displayed above show some interesting considerations. The most economic option according to the source [5] is the PV CdTe. Its price is almost the same as the cost of a multicrystalline fixed (i.e. no tracking system) plant. However a monocrystalline system with 1-axis tracking system (“Mono - 1 Axis”) costs 1.39 times more than the cheapest option (PV CdTe), and is also more expensive than a Compact Linear Fresnel Reflector (CLFR) plant (which is 1.25 times more expensive than the PV CdTe option). A Parabolic Trough or Central Tower option costs between 1.46 and 1.84 times more than the PVCdTe facility, however this ratio decreases to just 1.05 to 1.32 when compared to the most expensive PV option (monocrystalline with tracking system). This analysis is summarised in Graph 4 where the value 1 is assigned to the cheapest option (PV CdTe Fixed) and all the others are expressed in proportion to this.

Last but not least, location will affect both the capital and running costs of an energy facility. This aspect is highlighted by research carried out in 2011 [6]. The main findings are displayed in graphs 4 and 5.

Data displayed in Graph 5 indicates that whilst the c-Si technology is marginally more expensive than the CdTe, a Parabolic Trough system costs between 1.45 and 1.55 times more than the cheapest PV option (CdTe). In this case the variation is caused by the location as well as the choice of technology.

In conclusion, although the LCOE is a powerful parameter to summarise the economic performance of an investment in the power sector, a more detailed analysis can provide additional elements to consider and inform the decision-making process.

The overall financial analysis might be constrained by the availability of capital to invest, in which case PV options might become more achievable. However, if the business target is the lower cost of electricity produced, a CSP solution might be more appropriate.

The bankability of energy projects is also affected by other elements such as the level of risk. From this point of view, CSP technology is still viewed as a “newer” technology (when compared to PV) and as a consequence the perceived risk is higher [3]. Nevertheless, downward cost trends in the supply chain of both technologies, as well as a substantial increase of CSP plants built around the world, will make the selection of the better option a more complex question than a mere comparison of LCOE or capital costs. Other technical aspects need to be assessed as well, and as a whole, it will be more apt to identify a situation-specific and suitable configuration rather than a ‘better’ one.