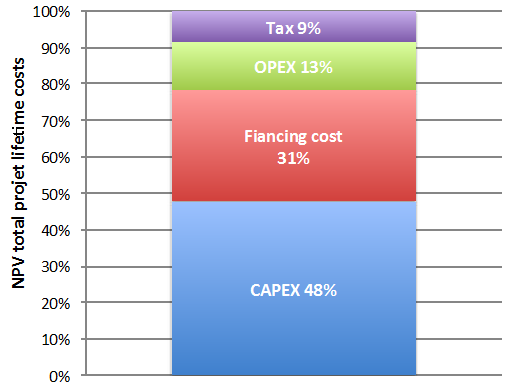 As previously reported the final objective of cost modeling is to provide developers, EPC companies and other CSP players with a set of economic metrics that characterize and quantify the viability of a specific project.

Cost modeling is also a key feature when performing an economic optimization study, to find the optimal plant configuration and set the minimum energy yield and maximum cost thresholds requirements that must be met for the project to achieve a certain return on investment.

Performing a cost modeling exercise may be a lengthy and complicated task that requires one to find a tradeoff solution between time requirements, complexity, and accuracy and uncertainty of the results.

Although industry players use different cost modeling tools, most of them are based on a DCF (discount cash flow) methodology. A DCF calculates the NPV (net present value) and IRR (internal rate of return) by estimating future project cash flows on a periodic basis (mainly annual or monthly) for the entire project lifetime taking into consideration the time value of money.

Based on the intended use, the complexity of a cost modeling tool may vary a lot. In any case, the definition of the following input data to feed the model is required:

According to the complexity of the cost modeling tool, the introduction of these inputs may require just a few parameters (for example a single input as total investment cost) or a comprehensive set of data (for example multiple inputs as the cost of individual components).

This article will give an overview of the cost input data required for a cost modeling tool, i.e. CAPEX and OPEX.

A CSP project is characterized by a large upfront cost, which has a direct impact in the final cost of the electricity, generated. Indeed, as shown in the following figure taken from the CSP Parabolic Trough Report 2013, CAPEX accounts for almost 50% of the total project lifetime cost in a parabolic trough plant.

Two different approaches are usually followed when dealing with CAPEX estimations and the data gathering process for a cost modeling tool:

• Bottom up approach: CAPEX is calculated by aggregating the cost of individual components, their transport to site and installation. It is the most robust and accurate way to determine the CAPEX of a project but it requires a great knowledge of the technology and the market. It can be a lengthy process since quotations from suppliers are usually needed.
• Top down approach: CAPEX is calculated based on averaged installed cost (for example cost per installed watt) using other projects or publicly available data as reference.

The level of CAPEX detail included in a cost modeling tool analysis also determines the level of complexity in other areas of the model such as in the depreciation schedules.

Under the typical CSP project structure based on an developer and EPC contractor scheme, the total CAPEX can be divided in two main expenses, i.e. EPC and developer cost. Although all the investment is ultimately assumed by the developer, this division is intrinsic to the structure of such projects.

The EPC cost is associated with the turnkey services provided by the EPC contractor that is responsible for the engineering, procurement and construction of the CSP plant, guaranteeing a minimum plant perfomrnace. EPC margin charged by the EPC company is included here.

Developer cost includes the cost incurred by the developer from project proposal to COD (commercial operation data) and it includes permitting and lincensing, owner´s engineeing, project management, insurances, pre-construction costs, land purchase and the required studies and due diligences.

EPC cost usually accounts for 90-95% of the total CAPEX with the remaining 5-10% associated with developer costs. However the weight of the developer cost in the final CAPEX is very project specific depending on local permitting and local regulations.

Depending on the complexity of the cost modeling tool, CAPEX can be assumed at an initial single cost or can be modeled accordying to the specific project construction schedule (usually between 18 to 32 months depending on project size) and EPC payment scheme.

As with the CAPEX, different granularity can be used when calculating OPEX for a cost modeling tool. Therefore, OPEX can be estimated either individually or in aggregate (using a single metric either total OPEX cost or cost per kWh). However the presence of fixed costs that are independent of production makes it difficult to accurately model OPEX as a single aggregate value. Besides, there are some important OPEX expenses that do not happen on a yearly basis but every certain number of years such as turbine major overhaul which is usually done every 5-7 years and requires some weeks of plant shutdown. Depending on the complexity of the cost modeling tool, these periodic expenses are simulated according to its real schedule or are equally distributed along the years.

Since OPEX is a cost which is present throughout the entire project lifetime, the potential escalation of this expense with time is an important assumption to be considered in a cost modeling tool.