The Calm before the Storm: Noor II and III

Morocco’s Noor II and III CSP plants are on the verge of being awarded. Ahead of the highly anticipated announcement, CSP Today speaks with MASEN and two of the prequalified bidders on the latest developments. 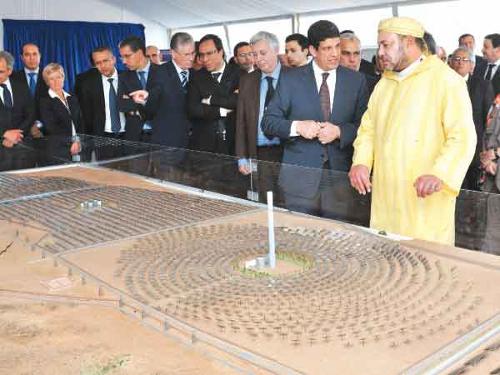 King Mohammed VI with a model of the 160 MW Noor I CSP plant, which is scheduled to come online in 2015

Two years have passed since the request for qualifications was launched for the second phase of the Noor Solar Complex in Ouarzazate, which comprises Noor II, a 150-200 MW parabolic trough plant, and Noor III, a 100-150 MW central tower plant.

By August 2013, three and four consortia were prequalified to bid for the Noor II and Noor III projects respectively. The Request for Proposals (RfP) was launched shortly after, and the deadline for bids was eventually extended to mid-September 2014.

“The RfP were launched on time, the technical and financial proposals went in and were opened and read out several months ago. It is somewhat on schedule,” Paddy Padmanathan, president and CEO of ACWA Power, told CSP Today.

“We expect MASEN to confirm the preferred bidder award over the next month or so. As far as we know, the tender evaluations are complete. We’re now waiting for the final award.”

MASEN’s communications officer Maha El Kadiri confirmed to CSP Today that the announcement is planned by the end of this year or early next year at the latest. “Construction is expected to start the first semester of 2015 with an operation start in 2017,” she said.

ACWA Power and Spanish engineering company Sener - which is also working with ACWA on the Noor 1 project – were among the prequalified consortia bidding for the construction of both Noor II and III. The Saudi Independent Power Producer (IPP) bid with Sener Grupo de Ingeniería for Noor II, and Sener Ingeniería y Sistemas for Noor III.

According to a Reuters report, the consortia led by ACWA Power and Abengoa bid the lowest to build the two solar power plants.

“ACWA is in a good position to get both of those projects, but the final decision has not yet been made,” says Reda El Chaar, chairman of the Dubai-based Access Advisory, a project development and consultancy firm covering the Middle East, Turkey and Africa.

“MASEN is still evaluating the bids and after they complete the evaluation; they need to send it to the World Bank Group to get the non-objection letter from them to announce the award. So I think it’s still going to take some time to get an announcement on the awards,” explains El Chaar.

Access Advisory were involved in the second phase of the Noor Solar Complex on the consultancy side, advising EDF Energies Nouvelles on the Noor III project.
The French renewable energy firm had bid for the project in a consortium led by its parent company Électricité de France, comprising Japan’s Mitsui & Co., Alstom Power System, Brookstone Partners Morocco, and BrightSource Energy.

“The Moroccan CSP market is excellent and the program is well managed,” said Tom Riley, BrightSource’s senior advisor for international development and former U.S. Ambassador to Morocco. “They still have another 1,500 MW of solar to allocate, of which more than half is expected to be CSP, so we will stay committed.”

A consortium comprising Masdar and GDF Suez was also among the pre-qualified bidders for both Noor II and Noor III. Yago Mancebo, Investment Manager at Abu Dhabi’s Masdar said in an interview earlier this year that the bid represented a major milestone for the company.

“Morocco will be important for us. It is a big project and a big first step for us in the IPP arena, so we want to learn as much as possible. We have a wealth of experience in CSP but we are new to the bidding process and for that reason, we made the decision to join forces with GDF Suez, who is the largest IPP in the world.”

As the only country in the Middle East and North Africa currently deploying CSP plants, Morocco’s solar power market is being carefully watched by the global industry.

The 160 MW Noor I CSP parabolic trough plant awarded to ACWA Power back in 2012 is now on track toward achieving commercial operation in the second half of 2015, according to the CSP Today Global Tracker, and more than 530,000 RP3 annealed mirrors have been supplied for the project by ACWA Holding’s Flabeg.

Like Noor I, each of Noor II and III will integrate at least three hours of thermal energy storage to maximize peak-hour generation and displace combined-cycle gas turbines fuelled by expensive imported LNG. Indeed, MASEN is well aware of the value of dispatchability through thermal storage.

“Morocco has always said it intends to do more CSP but they will also do some PV,” highlights Padmanathan. Although the fine print for future projects has yet to be published, the country continues to need dispatchable power, he says.

Together, the three Noor CSP projects are part of the broader Morocco Solar Plan (MSP) that aspires to have at least 2 GW of installed solar power capacity by 2020. This, according to government projections, should supply approximately 14% of the country’s electricity demand.

Next on the MSP agenda is the 50 MW Noor IV PV project, expected to launch early next year to complete the 500 MW planned for the Ouarzazate project.

“It’s confirmed that Noor IV, which is the fourth project in the Ouarzazate complex, is going to be PV,” says El Chaar, adding that beyond Noor II and III, it’s not clear where the large-scale CSP is going to be.

“They have identified five or six sites at different stages of development, two of which are more advanced. I think the next immediate projects in Morocco will be PV and that CSP will probably take a short break for the next year and a half,” notes El Chaar.

Located in central and southwestern Morocco respectively, Noor Midelt and Noor Tata were identified by MASEN in March 2014 as the next sites for solar developments following Ouarzazate.

“It is not known for sure (whether CSP will feature in Noor Midelt and Noor Tata), but there could be a higher amount of PV than the Noor programs, which have less than 10% PV,” says Riley.

According to MASEN’s El Kadiri, feasibility studies are currently being conducted for Noor Midelt and Noor Tata. “Similarly to Noor Ouarzazate, these multi-technology complexes will host CSP as well as PV plants.”