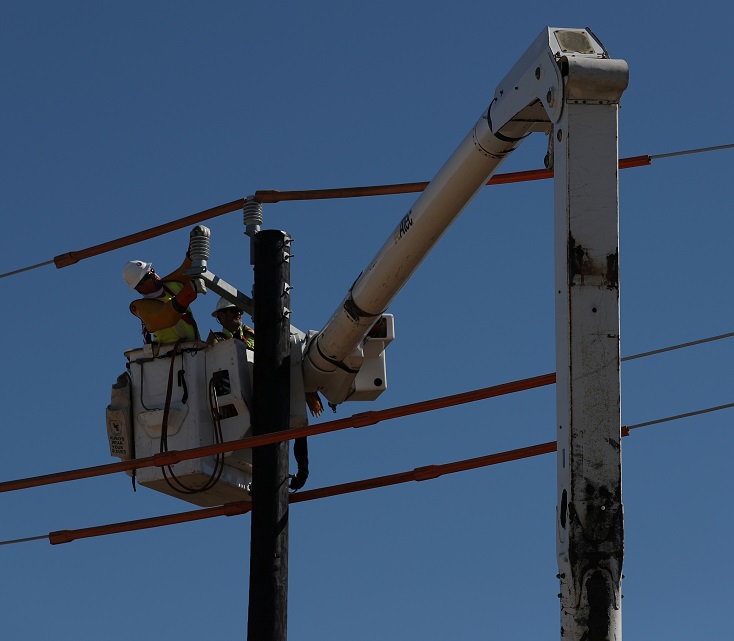 The financial damage of the Texas ice storm is being felt far and wide after supply cuts led to soaring prices. Image credit: REUTERS/Adrees Latif)

Over 4 million Texans were left without power and dozens of people died after a rare cold snap fell upon the South.

By February 15, some 34 GW of power generation was offline in Texas - around 40% of expected capacity - as extreme low temperatures and ice cut wind, gas, coal and nuclear generation. Texas is a deregulated power market and is more used to supply shortages in the summer, when hot weather hikes air-conditioning demand. Texas is the fastest-growing solar market and will reach 10 GW of capacity by the end of 2021.

Amid freezing temperatures, coordinated blackouts were implemented across the Electric Reliability Council of Texas (ERCOT) power grid and customers were urged to limit power usage to prevent system-wide outages. ERCOT raised power prices to $9,000/MWh to encourage power generators to stay online. After the event, ERCOT was criticised for maintaining prices at high levels for too long a period, leading to $16 billion of excess market costs. The Texas Public Utility Commission ruled ERCOT did not have to compensate market participants for the error.

After the storm passed, ERCOT directors and the chair of the Texas Public Utility Commission resigned, Texas Governor Greg Abbott pledged to overhaul the grid operator, and generators and suppliers were left reeling from the financial impact. The grid operator then fired its CEO Bill Magness after the fallout of the pricing error became clearer.

Brazos, a generation and transmission cooperative, filed for Chapter 11 bankruptcy relief after receiving a $2.1 billion bill for power purchased during the storm, the group announced March 1.

Power generators, transmission and distribution utilities, electric cooperatives, municipality-owned utilities, ERCOT, the Railroad commission and government representatives all failed to take the necessary steps over the last 10 years that could have averted the issues, Walker said.

Colorado utility Xcel Energy plans to install 1.6 GW of large-scale solar power capacity and 1.3 GW of distributed solar by 2030 in a new plan to double renewable energy capacity by 2030.

Xcel plans to add 5.6 GW of renewable energy capacity in Colorado, including 400 MW of energy storage, in a bid to reduce carbon emissions by 85% by 2030, the company said February 24.

Xcel will build 1.3 GW of firm dispatchable power generation, including natural gas capacity, to fulfil its carbon reduction objectives, the utility said. Coal-fired generation will be significantly reduced by 2030 and all coal units will be taken off-line by 2040, it said.

Under its current plan, Xcel aims to have a zero-carbon power generation portfolio by 2050.

Developers White Pine Renewables and Noria Energy have completed the largest floating solar farm in the US on a wastewater treatment plant in California.

Located in the Sonoma wine region, the 4.8 MW facility will deliver power to the city of Healdsburg under a 25-year power purchase agreement (PPA), the project partners said.

Global installed floating solar capacity hiked from 10 MW in 2015, to 3 GW at the end of 2019, with early activity mainly concentrated in Asia. Growth is spreading and annual installations could rise to over 3 GW by 2022, according to forecasts from Wood Mackenzie. Iberdrola is to build two more solar plants of total capacity 755 MW in the Extremadura region in central Spain and will double its renewable energy capacity in the region to 5.5 GW by 2023, the company announced March 3.

Last year, Iberdrola announced it would spend 75 billion euros by 2025, of which half on renewables, doubling its installed capacity to 60 GW. By 2025, Iberdrola aims to achieve 16 GW of installed solar capacity, 26 GW of onshore wind, 4 GW of offshore wind and 14 GW of hydro, the company said.

Iberdrola invested 9.2 billion euros in 2020, of which 91% was on renewables and power grids, the group said. Net profit rose 4.2% to 3.6 billion euros and underlying operating profit (EBITDA) climbed 8% to 10.7 billion euros, excluding the impact of COVID-19 and exchange rates.

Iberdrola's acquisition spree last year included the buyout of US utility PNM Resources through its US subsidiary Avangrid. The deal expands Avangrid's regulated asset base to 10 regulated companies across six states and makes it the third-largest renewable energy company in the US.

EDP Renewables (EDPR) plans to install 4 GW of solar and wind capacity per year through 2025 and install 50 GW of renewables by 2030 in an accelerated growth plan.

EDPR is controlled by Portuguese utility EDP and has 20 GW of installed renewable energy capacity. EDP plans to spend 24 billion euros ($28.5 billion) in the next five years, of which 80% on renewables and 15% on grid infrastructure, and become carbon neutral by 2030, the utility said in a strategic update February 25.

Renewables currently make up 79% of EDP's global portfolio and will represent 100% by 2030, it said.

EDPR is considering raising between 1.5 and 2 billion euros from institutional investors, EDP said.

EDP currently owns 82.6% of EDPR and would maintain a stake of more than 70% in the company, it said.