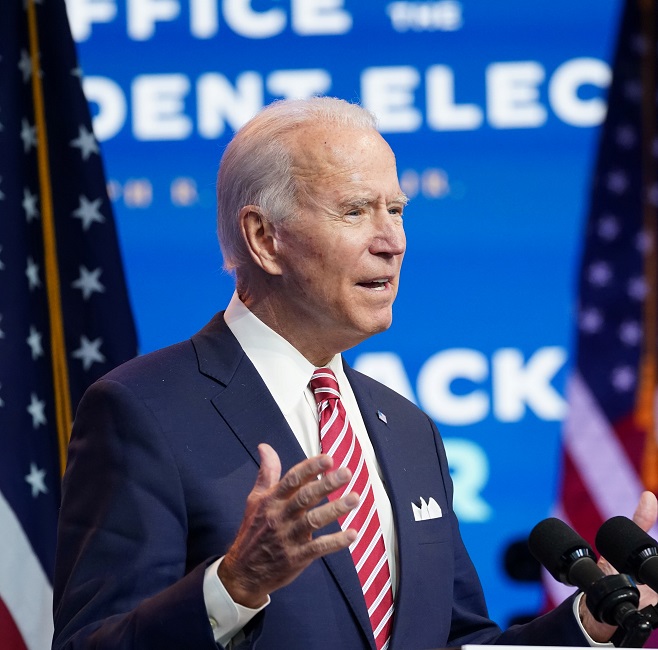 The President-elect has pledged to spend $2 trillion on clean energy by 2024. (Image credit: REUTERS/Kevin Lamarque)

The US Solar Energy Industry Association (SEIA) set out its proposals for a new Joe Biden government November 12, calling for an extension of the investment tax credit (ITC) program and a new cash grant option to make up for a recent drop in tax equity availability.

Joe Biden's victory in the US presidential election on November 3 is set to accelerate the deployment of solar, wind and energy storage in the coming years, slash carbon emissions and place clean energy at the heart of US job growth.

The Democrat President-elect has pledged to spend $2 trillion on clean energy and sustainable infrastructure in his first four-year term and achieve net zero carbon emissions in the power sector by 2035. Biden wants the US to become entirely carbon neutral by 2050.

The US power sector emitted 1.6 million tons of CO2 in 2019, around a third of total US CO2 emissions, data from the US Energy Information Administration (EIA) shows. Some 60% came from coal-fired power generation and 38% from gas-fired plants.

Biden proposes to reform and extend tax incentives that support clean energy and implement a technology-neutral "Energy Efficiency and Clean Electricity Standard (EECES)" for utilities and grid operators. Solar and wind activity was already strong after years of cost reductions and rising carbon reduction targets set by corporations and utilities. In its proposals, the SEIA supported the implementation of a federal carbon price mechanism and said the ITC should also apply to stand-alone storage projects to underpin solar growth.

The government should also scrap Section 201 and 301 import tariffs placed on solar cells and modules to increase the competitiveness of solar projects, the industry group said.

The SEIA also wants new measures that support the development of solar on public land and improved planning processes for long-distance transmission lines.

The government should invest in solar workforce training, as well as the research and development of solar technologies such as perovskite, concentrated solar power (CSP), agri-PV and the reduction of soft costs such as those in the development and operations and maintenance (O&M) phase, it said.

To meet his net zero target, Biden will also support the use of existing hydroelectric and nuclear facilities and the development of energy storage, advanced nuclear reactor and carbon capture technologies. He has also pledged to invest in 500,000 electric vehicle charging stations to accelerate the shift away from fossil fuels.

Biden will look to implement a suite of regulation changes alongside financial support packages. The extent of these reforms will depend on the result of Senate elections.

The Democrats held the House of Representatives on November 3 but the control of the Senate is on a knife edge. The Republicans hold 50 seats while the Democrats have 48 and a run-off for the two remaining seats in Georgia on January 5 is set to decide the balance of power. If the Democrats win both seats in Georgia, Vice President Kamala Harris will have a tie-breaking vote.

Global renewable energy installations are set to hit a record level of almost 200 GW this year and represent around 90% of all new power additions, the International Energy Agency (IEA) said in its Renewables 2020 report published November 10.

"Renewable power is growing robustly around the world this year, contrasting with the sharp declines triggered by the COVID-19 crisis in many other parts of the energy sector such as oil, gas and coal," the IEA said.

In the U.S. and China, annual solar and wind additions are forecast to jump by 30% as developers race to take advantage of expiring incentives, the agency said.

Global additions will rise further next year, boosted by growth in Europe and India as activity recovers from the impact of COVID-19, it said. Cost reductions and sustained policy support will continue to drive strong growth in renewables in the medium-term, IEA said.

If implemented, the US clean energy plan proposed by President-elect Joe Biden would lead to a faster deployment of PV and wind and a faster decarbonisation of the global power sector, the agency noted.

Inverter supplier SMA Solar posted nine-month revenues up 23% on a year ago to 774 million euros ($916.9 million) as shipments recovered somewhat in the third quarter, the German company said November 12.

“The effects of the global coronavirus crisis have also posed major challenges to SMA over the past nine months,” Jürgen Reinert, SMA's CEO, said. “I am therefore all the more pleased that, in spite of the declining market, we generated significant growth in sales and earnings and thus gained market share." "Our supply chain is stable and customer demand has picked up slightly after the weak development in Q2 due to the COVID-19 crisis," the company said in an investor presentation.

"In the long term, we see great potential for SMA in the global restructuring of the economy toward more sustainability and ultimately climate neutrality," Reinert said.

Iberdrola plans to invest 75 billion euros ($89.0 billion) in 2020-2025, of which half will be spent on renewables, doubling its installed capacity to 60 GW, the Spanish power utility announced November 5.

By 2025, Iberdrola aims to achieve 16 GW of installed solar capacity, 26 GW of onshore wind, 4 GW of offshore wind and 14 GW of hydro, the company said.

Most of the remaining investment - some 27 billion euros - will be spent on power networks.

"Networks will be critical to the electrification of the economy and the industrial revitalization of all territories," the company said.

Iberdrola has been on an acquisition spree this year. Last month, the company announced it would acquire US utility PNM Resources through its US subsidiary Avangrid, expanding its regulated asset base and becoming the third-largest renewable energy company in the US.

Iberdrola plans to spend 10 billion euros in 2020 and the PNM buyout is Iberdrola's eighth corporate acquisition since the start of the COVID-19 pandemic. Previous acquisitions were in France, Scotland, Sweden, Australia, Japan and Brazil. By the end of September, the group had spent 6.6 billion euros, a rise of 23% on a year ago. Net profit in January-September climbed by 4.7% to 2.7 billion euros.