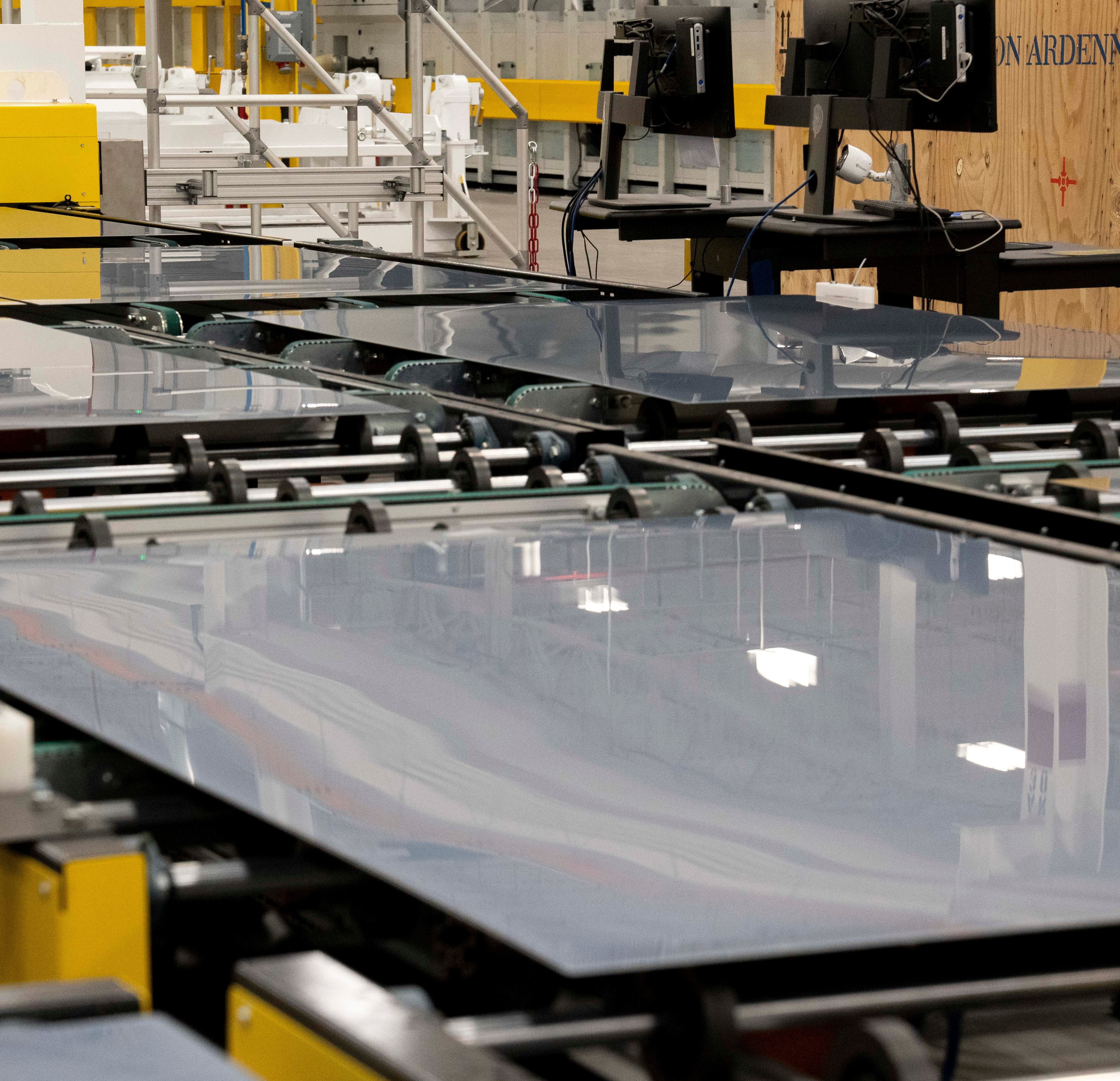 The U.S. and Europe are expanding solar manufacturing capacity to meet ambitious renewable energy targets and bolster energy security. Financial support in the U.S. Inflation Reduction Act and a new package of measures pledged by the European Union last week should help perovskite developers move from pilot to commercial-scale factories.

Global module supply is currently dominated by established monocrystalline silicon wafer technology but the performance of silicon-based cells is approaching its theoretical limit and perovskite technologies have rapidly improved.

Perovskite materials have a crystal structure and offer strong light absorption and electric charge properties. As solar developers seek higher efficiencies and lower cost of energy, tandem cells combining silicon with perovskite are widely considered to be the next step.

Tandem cells combine a solar cell that is particularly efficient in the infrared part of the solar spectrum with another that is optimised in the blue and ultraviolet (UV) range. The theoretical conversion limit for silicon cells is around 29% and tandem silicon-perovskite cells could increase this to 43%.

Oxford PV plans the commercial launch of its perovskite-on-silicon tandem cell this year, predicting a conversion efficiency of 27% and an energy yield of 24%, compared with a yield of around 20%-22% for most of the silicon panels currently on the market.

The company plans to expand its pilot factory near Berlin, Germany and scale up production to 10 GW by the end of the decade.

In France, the IPVF solar institute has partnered with French manufacturer Voltec Solar to build a solar panel factory that will produce Tandem 4T Perovskite/Silicon cells. The partners aim to start production in 2025 and ramp up capacity to 5 GW by 2030.

“Tandem technology will be the dominant photovoltaic technology of the next decade,"  Lucas Weiss, CEO of Voltec Solar said in a statement. "It is likely to change the competitive landscape.”

The perovskite layers are also far thinner than silicon designs and use around 100 times less materials, Marque said.

In addition, the material can be processed at a lower temperature and in a liquid state, allowing “energy and emissions savings as well as easier coating of surfaces," according to Shankar G. Sridhara, Chief Technology Officer at panel manufacturer REC Group.

Perovskite concepts will result in more flexible, lightweight panels that can be installed more easily on roofs and other services, he said.

Germany is Europe's largest solar market and the government has identified rooftop solar as a key growth segment in its bid to quadruple solar capacity by 2030. Meanwhile, the EU's RePowerEU plan, provisionally agreed by legislators in December, requires all new residential, public and commercial buildings of a certain size to install rooftop solar panels. Developers of larger solar farms are also looking to alternative sites such as disused mines, where uneven services can prove challenging.

Oxford PV has targeted degradation levels less than or equal to silicon so its module customers can offer industry-standard warranties, the company said.

Perovskite developers have increased efficiency rates faster than other new cell concepts but they still face the risks associated with emerging technologies.

The cost of finance is higher for less proven technologies and companies often struggle to raise finance to step up from pilot projects to commercial-scale facilities. Oxford PV's commercial launch has slipped from earlier targets as the company tackled supply chain challenges and economic headwinds during the Covid pandemic.

“We have secured most of our funds from private sources," Oxford PV CEO Frank Averdung told Reuters Events. "Some of our support has come from local German ministries and this has given us the right conditions to expand our pilot factory outside Berlin.”

In Europe, the EU has provided funding for research activities but there has been a lack of funding available to scale up activities, mainly due to EU state aid rules. The new support package for clean technology pledged by European Commission President Ursula von der Leyen on January 17 could change this. The EU is planning to mobilize state aid and a sovereign fund for renewable energy companies and "focus investment on strategic projects along the entire supply chain," Von der Leyen told the Davos economic summit in Switzerland. The EU has also reopened bids for its Innovation Fund mechanism that will provide 25 billion euros ($27.2 billion) of support over 2020-2030 for innovative low-carbon technologies and has launched a Solar PV Industry Alliance to identify investment needs and coordinate funding.

IVPF and Voltec plan to access both private and public funding to build their factory in France. For example, the partners are looking to access French government funding for a pilot line through a national tender for innovative energy solutions.

Perovskite developers must back up ongoing technology improvements with manufacturing gains that will reduce risks and drive down costs. Silicon solar cells have benefited from years of manufacturing learnings to build out industrial-scale facilities.

Developers will also be wary of advances in other solar technologies, but tandem capabilities should mean perovskite concepts benefit from progress in areas such as higher performance HJT (Heterojunction) cells that combine crystalline silicon and amorphous thin silicon film in three layers. REC Group expects a compound annual growth rate for HJT manufacturing of 70% over 2021-26 and plans to build a 2 GW HJT module factory in France that in future could produce tandem HJT-perovskite solutions.