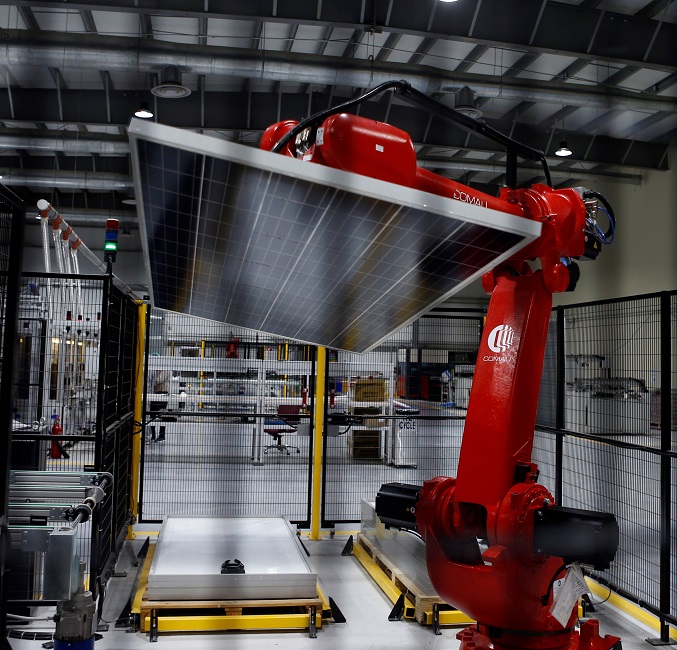 Solar developers are highly dependent on products from Asia and the EU has hiked targets as the region looks to end its supplies of Russian oil and gas following Russia's invasion of Ukraine.

About 80% of the 200 GW/year global solar manufacturing capacity is located in Asia, particularly in China, where large factories and low labour costs have driven prices below European and U.S. levels. Many solar projects were delayed due to logistics issues following the pandemic, highlighting Europe’s reliance on Asian supplies.

Europe is under pressure to do more after U.S. President Biden passed sweeping measures to support solar manufacturing and deployment in his ground-breaking Inflation Reduction Act. The U.S. also imposes tariffs on products from China and India has also introduced duties on Chinese products. The European Commission (EC) ended trade controls on solar power from China in 2018.

The EU has agreed to provide some support but industry is calling for further measures that will help them compete with Asian suppliers. Large high-tech factories are needed to improve competitiveness and last month the CEOs of 12 European solar developers and manufacturers urged the EC to take bolder action.

Price support is particularly needed for energy intensive activities, such as Europe's established polysilicon sector and ingot and wafer production that is lagging far behind, Acke said.

Some EU support is already on the way. Next month, Brussels will launch the Solar PV Industry Alliance to identify investment needs and coordinate funding mechanisms, while the EU Innovation Fund reopened for company bids on November 3. The fund will provide 25 billion euros ($25.1 billion) of support over 2020-2030 for innovative low-carbon technologies and projects awarded funding in earlier rounds include REC Solar’s planned 2 GW solar module factory in France and Enel’s expansion of its 3Sun factory module factory in Italy from 200 MW to 3 GW by 2024. The EC is also preparing an EU-wide contract for difference (CFD) scheme for carbon and is expected to outline a new European Critical Raw Materials Act early next year that aims to ease supply chain bottlenecks.

The EU has set a target of 30 GW/year PV manufacturing across the entire supply chain by 2025 but some activities are far harder to expand than others.

Europe is an important supplier of solar inverters and has a healthy supply of polysilicon thanks to leading supplier Wacker but production of modules, cells and more midstream components is lagging behind its needs. Solar manufacturers are currently developing over 30 GW of additional capacity, from polysilicon to module production, but not all of this will be built.

"The main part of the 35 GW is coming from polysilicon and ingot manufacturers where close to 27 GW is considered at risk/already mothballed," Marius Mordal Bakke, a Senior Analyst at Rystad, told Reuters Events.

"We’re calling for emergency measures in the form of competitive [operating expenditure] support for this manufacturing segment," he said.

Energy costs are two to three times higher than in the U.S., Acke said, “making overall solar PV manufacturing costs some of the highest in the world."

The US. Inflation Reduction Act provides a 30% Investment Tax Credit (ITC) for domestic solar manufacturers and a production tax credit (PTC) that is product specific. Manufacturers can claim additional tax credits if they source components from U.S. suppliers.

The act spurred several announcements of new manufacturing facilities. Some suppliers are awaiting clarity on domestic content thresholds and the supply of wafers and cells remains an issue.

“Tax incentives are a smart way to create an investment environment for scale up of renewable energy value chain," Jochen Hauff, Director of Corporate Strategy, Energy Policy & Sustainability at developer BayWa r.e., said. Similar measures in Europe could "supplement the short-term political focus on reducing energy cost burdens for consumers," he said. PTCs incentivise according to output and would be a suitable tool to help build large-scale factories that are needed for competitive long-term supply, he noted.

"We think that a direct subsidy for energy prices can only be a short-term emergency measure," he said.

Support could also be provided to form pan-European coalitions that build a more efficient regional supply network than following a country-by-country approach, he added.

Tender frameworks which favour local suppliers and a re-balancing of customs regulations to help strengthen domestic manufacturing would help, he said.

“In general, we are convinced of the system of free trade without limitations. Nevertheless, it is important to minimize dependencies on China in the photovoltaic industry and to create local economic benefits, for example through new jobs," Bachmann said.

"Of course, this also involves environmental aspects such as the CO2 footprint, which is naturally much smaller with local production than with imports from Asia."