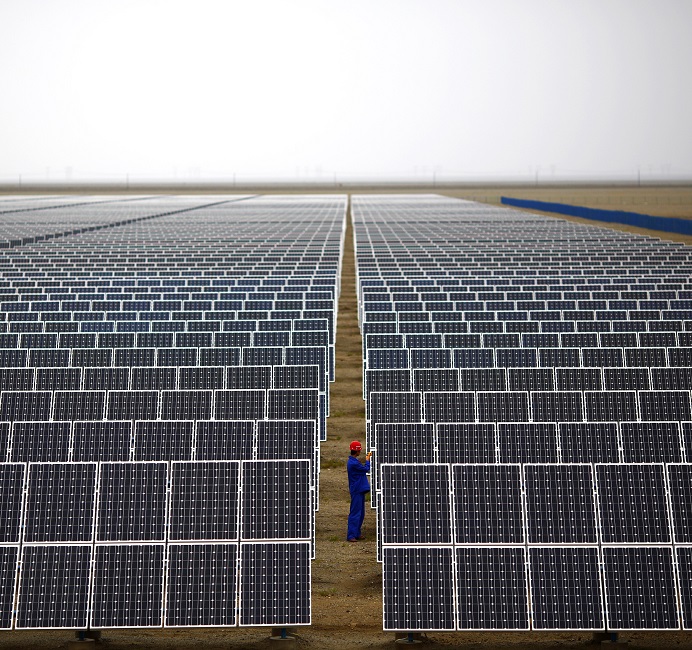 China currently has 530 GW of solar and wind capacity but it only supplies 10% of power needs. (Image credit: REUTERS/Carlos Barria)

China installed 120 GW of renewables in 2020, including 48 GW of solar and 72 GW of wind, more than double the level in the previous year. From now on, the NEA will set renewable energy targets based on transmission rather than construction, to avoid excess capacity, it said.

"China will no longer issue annual targets for renewable capacity, but will give forecasted renewable power consumption and guide local governments to arrange construction of new projects, as well as promote cross-region renewable power trade," the NEA said.

China aims to reach peak carbon emissions by 2030 and coal consumption will continue to rise until 2025, when it will start to be reduced, President Xi Jinping said last month.

Global emissions are forecast to bounce back by 5% this year to reach close to 2019 levels, the International Energy Agency (IEA) said. Demand for fossil fuels will rise and more than 80% of the global growth in coal demand will come from Asia, led by China, it said.

Investors should not fund any new oil, gas and coal production or any new unabated coal-fired power plants in order to reach net zero by 2050, the International Energy Agency (IEA) said in a new report published May 18.

The global electricity sector must reach net zero emissions by 2040 and annual renewable energy installations must increase four-fold by 2030, IEA said. This equates to 630 GW of annual solar additions and 390 GW of wind by the end of the decade.

The world must reach net zero carbon emissions by 2050 to achieve targets set out in the 2015 Paris Agreement. Adopted by 197 countries, the agreement aims to cap the rise in temperatures to as close as possible to 1.5 degrees Celsius above pre-industrial levels.

IEA's report sets out more than 400 global milestones to achieve net zero and comes ahead of the next round of global climate talks in Scotland in November. IEA's stark projections surprised some observers as the agency has historically been aligned with hydrocarbon industries.

"(This is) a massive blow to the fossil fuel industry. This is a complete turnaround of the fossil-led IEA from five years ago," Dave Jones, global program lead at Ember think-tank, said.

Current pledges by governments "fall well short of what is required," IEA said. The opportunity to reach net zero by 2050 is "narrow" and the energy transition must be accelerated, it said.

California, Texas at risk of power shortages this summer: NERC

California, Texas, New England and the MISO grid area in central and northern US are at risk of power shortages this summer due to above-normal temperatures predicted across much of the region, the federal grid regulator North American Electric Reliability Corporation (NERC) said May 14.

"Of greatest concern in the high-risk category is California, where up to 11 GW of additional transfers are expected to be needed in late afternoon to offset reduced solar output. This is in contrast to 1 GW of transfer needed on a normal peak day," NERC said. California also faces lower hydroelectric supplies than last year due to an ongoing drought. Reservoir levels are currently at 70% of normal, according to regional grid operator CAISO.

Some 2 GW of additional capacity will be available during peak demand periods this year and the power authorities are looking at ways to add a further 1.5 GW by the summer, CAISO said in its latest summer outlook. California's power system is better placed than last year but key risks include a reduction of power imports into California due to wider shortages across the western US and further disruption to supplies from serious wildfires, it said. Growing renewable energy penetration is increasing the value of energy storage as operators look to mitigate intermittency risk. Solar and battery costs are continuing to fall and many developers are coupling solar projects with batteries to access higher power prices during peak demand periods.

Commercial and industrial (C&I) power prices in Texas doubled in February as soaring wholesale prices due to a winter storm were passed on to consumers.

A severe winter freeze in mid-February cut the supply of wind, gas, coal and nuclear power and left over 4 million Texans without power. As supplies froze, the Electric Reliability Commission of Texas (ERCOT) implemented coordinated blackouts and raised power prices to $9,000/MWh - around 400 times the average level - to encourage generators to stay online. The high prices, enforced for 77 hours, punished suppliers short of power and led to a swathe of bankruptcies, including Texas' largest power cooperative, Brazos.

Residential power prices rose by a much lower level of 7% on a year ago as most customers are on fixed price plans that are shielded from wholesale price swings. It was still the highest monthly residential price since July 2008 and average bills in February rose by 17% to $134 as households also used more power.

US gas-fired generation to fall this summer

Summer gas prices are forecast to rise 46% on a year ago to $3.13 per million British thermal units and rising renewable energy output will also displace some gas plants, EIA said.

In Texas for example, growing solar and wind capacity will lead to "substantially less" generation from gas-fired power plants this summer, the EIA noted.

Forecast US power generation by fuel

Coal-fired plants will be more economical this summer and are predicted to supply 26% of US power, up from 22% last summer. Renewables are forecast to supply 12%, up from 10% last year, not including hydroelectric power.