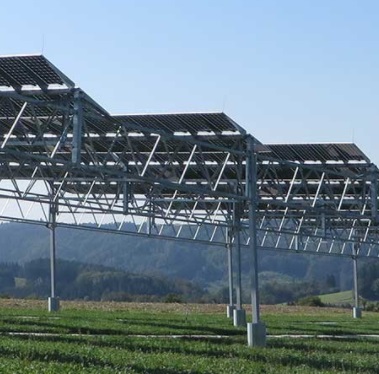 Competition over land resources and global climate challenges are driving growing interest in agri-PV, the co-development of land for both solar power and agriculture.

Early movers in agri-PV are developing pilot projects and new technologies that will deepen industry expertise.

Key challenges for farmers include assessing the impact of the agri-PV project on crop yield and the best crops for the shared environment, Willem de Vries, Project Manager, Large Projects at GroenLeven, told Reuters Events.

GroenLeven will test five different types of crops at the pilot projects that are tolerant to shade: blueberries, red currants, raspberries, strawberries and blackberries.

The projects will use specialised monocrystalline solar panels that offer the plants more light than standard models and more protection from direct sunlight, rain, hail and frost, increasing the crop yield.

"We have approximately 20,000 hectares of fruit cultivation,” he said. “...if only 50% of that were used in combination with agri-PV, we would be able to realize 8 GW of solar power.” To date, the Netherlands has installed around 7 GW of PV.

UK farmers have been key supporters of solar power and agri-PV projects could benefit from revamped support measures. In March, the UK government reopened subsidies for solar and onshore wind projects after a four-year moratorium which has favoured less mature technologies like offshore wind.

From next year, PV and onshore wind projects will once again be able to bid for UK contracts for difference (CfDs), the government said. The move will help the UK achieve its target of net zero carbon by 2050, it said. As farmers generally own or lease land under long-term arrangements, they are well positioned to make long-term investments. Many farmers are yet to install solar projects, offering strong growth potential.

"When we survey our members we find over 30% are using solar," Scurlock said.

“Through active shading and rainwater harvesting techniques, agri-PV offers additional resilience to food supply chains," Steinhueser said. "Take the current heatwave in Europe – in such conditions it's realistic, even in a country such as Germany, for crop yields to actually increase thanks to agri-PV module shading.”

A 194 kW pilot solar field at a 1 hectare agricultural site in Heggelbach, southern Germany, highlighted the complimentary qualities of solar and agriculture.

Based on potato yield, the project increased land-use efficiency by 160% in 2017 and by 186% in 2018, when temperatures were hotter, according to calculations made by Fraunhofer ISE.

“The system needs to be designed using materials that will not impact soil fertility (for example, concrete or treated wood), and support pillars need to be spaced so as not to slow down planting and harvesting operations,” he said.

Agri-PV projects could take advantage of rapid advancements in bifacial modules. Agri-PV panels are usually placed one to two meters off the ground, which means bifacial technology can offer efficiency gains, but this will depend on the type of crop, Steinhueser said.

The gradual phasing out of solar subsidies creates a challenge for agri-PV developers.

Dutch projects can still benefit from incentives of 88 to 99 euros/MWh, depending on the size of the installation, but agri-PV projects do not currently receive any special support beyond that offered to solar farms.

“At this moment, this is a danger for agri-PV installations, as the capex investments are still higher compared with conventional ground-mounted solar installations," de Vries said. The equipment is more specialised and installation methods, such as the driving of piles, can require greater resources.

Growth-hungry developers must establish business models that can be repeated in different markets.

While the Heggelbach plant was small in scale and received research funding, it demonstrated the application of community-based financing.

This type of business model, incorporating funding from local cooperatives, authorities or businesses, could be one solution to overcoming the barrier of high upfront costs, Steinhueser said.