The United States’ hydrogen infrastructure investment is rapidly taking shape and promises to create the backbone of a new energy system that both private companies and states are eager be a part of.

Over the last couple of years, the U.S. federal government has launched two major initiatives worth $8 billion directed at establishing a clean hydrogen network across the country and sparking more than 20 hub proposals from New York to Texas, California to Florida.

The Department of Energy (DOE) released a notice of intent in June to develop regional clean hydrogen hubs (H2Hubs) across the country through the Infrastructure Investment and Jobs Act (IIJA), signed into law in November 2021, and following the announcement of the Hydrogen Shot plan a year earlier.

The Hydrogen Shot plan sets out the basic target of reducing the cost of clean hydrogen by 80% to $1 per one kilogram within one decade (1-1-1).

The H2Hubs program sets the ball rolling for the creation of a network of hydrogen producers, consumers, and local connective infrastructure to accelerate the use of hydrogen as a clean energy carrier, the DOE says.

The funds will be available as part of a 50% cost match requirement from private enterprise or from state coffers, and rewards will be granted of between $400 million to $1.2 billion.

Most of the H2Hubs funding is expected to help pay for six to 10 hydrogen hubs, each showcasing different feedstocks and aimed at incentivizing a diverse usage and the connection of supply and demand.

“You can do a lot of things with this federal money … the program was designed to cast a really wide net,” says Fellow for Energy Security and Climate Change Program at the Center for Strategic and International Studies (CSIS) Morgan Higman.

The hubs program is in addition to the Inflation Reduction Act (IRA) measures announced in August which is estimated to provide some $13 billion in value across the industry over the next ten years through a Clean Hydrogen Production Tax Credit (H2PTC) with credit based on a sliding scale depending on the levels of carbon emitted during production.

While the IRA aims to incentivize clean, or low-carbon, hydrogen, targeting life-cycle greenhouse gas emissions from well-to-wheel, the IIJA program is centered on boosting production through the creation of vital infrastructure.

The scramble for federal dollars from either program has helped drive innovation on where the hydrogen will come from, the feedstock that will fuel it, and where it will be used.

“There’s certainly a sense that if you build it, they will come,” says Higman.

“The idea was to build a national network and this competition is inspiring a lot of thought about where supply is, how it can be used to meet demand, and how to create infrastructure and connectivity between these two things. It’s already proving to be successful, at least provisionally.”

In fact, Higman notes that there is such persistence among those competing for funds, that many are likely to proceed with their plans anyway, even if they don’t win a grant. 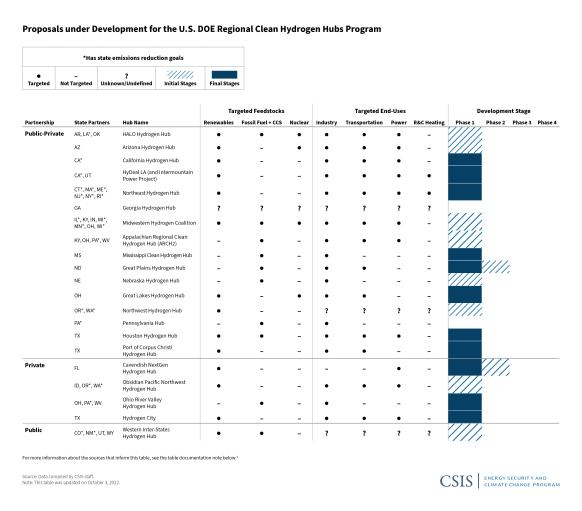 The H2Hubs initiative has caused a virtual stampede of cooperating and competing potential hydrogen producers, from both public and private actors, including the formation of the Midwest Hydrogen Coalition and New York’s coalition of six states to Texas’ Hydrogen City and Cavendish’s NextGen Hydrogen hub.

The Midwestern Hydrogen Coalition (M-H2 Coalition), in its Memorandum of Understanding (MoU) between Illinois, Indiana, Kentucky, Michigan, Minnesota, Ohio, and Wisconsin, touted its feedstock diversity and existing hydrogen infrastructure in the form of ammonia production, much of which is used in agricultural production, a leading industry in the region.

Transportation for medium- and heavy-duty vehicles, such as Great Lake shipping, aviation, and rail, and power generation and energy storage are also on offer for the hydrogen market ecosystem, the states say in the MoU.

“Investing in clean hydrogen is a key component of decarbonizing the transportation, manufacturing, and agriculture industries. By jumpstarting the hydrogen market in the Midwest, the state of Illinois will add to its robust number of clean energy jobs and bring down the cost of clean energy alternatives for those who reside here,” the office of Illinois Governor JB Pritzker wrote.

States moving down this path paved with federal grants have seen collective support from the private and academic sectors.

Since the New-York led consortium, including Connecticut, Massachusetts, and New Jersey, announced its formation in March, New York says it has added a broad selection of corporations and universities eager to play a part.

Since its conception, two other states have joined the group; Maine and Rhode Island.

"Building a robust and connected clean hydrogen market across the northeast will provide a game-changing clean energy alternative that will transform our ability to meet our shared climate goals while advancing 21st century innovation and stimulating strong economic growth throughout the region,” the New York state Governor Kathy Hochul said in a statement.