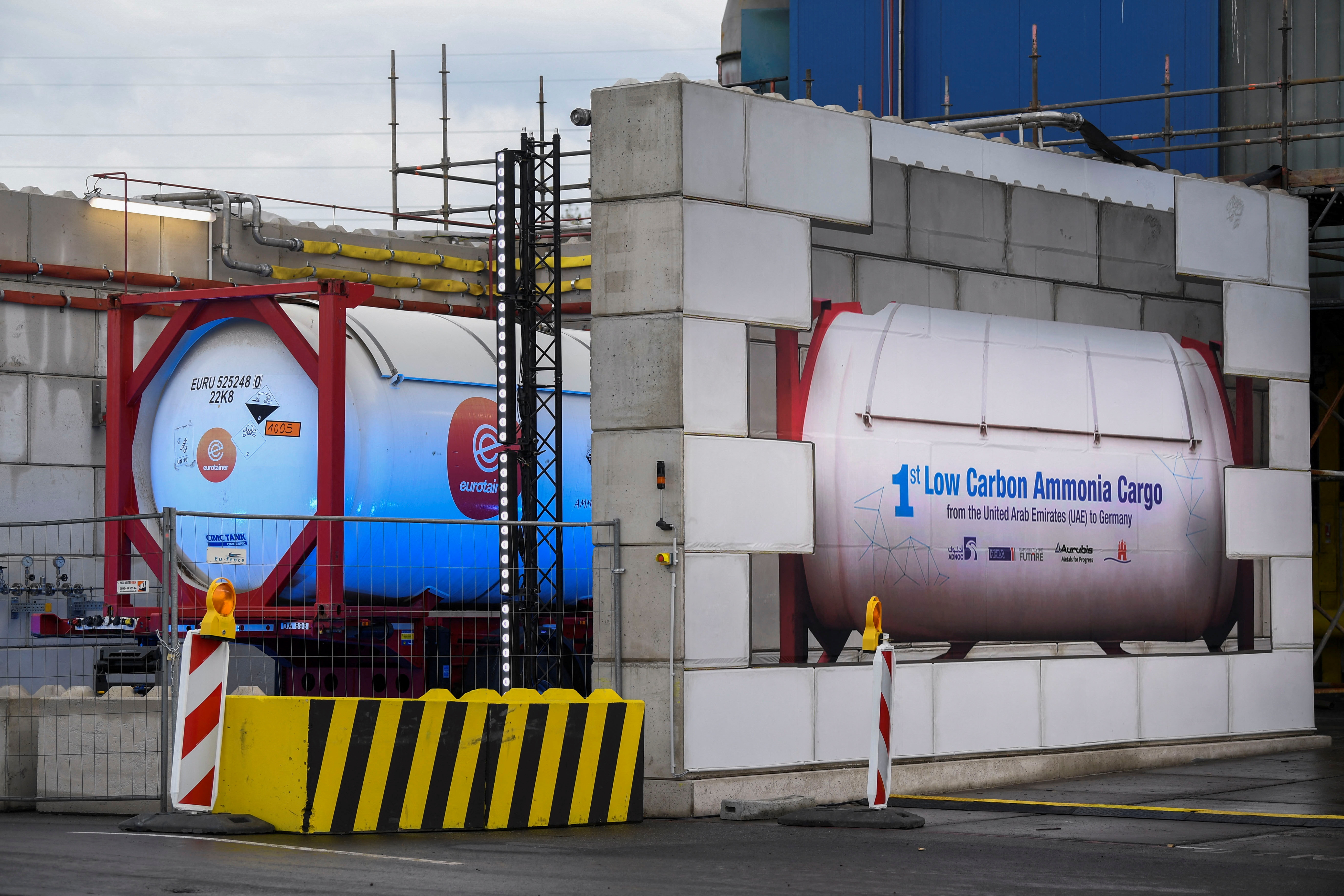 German metal company Aurubis has received its first official shipment of hydrogen from the United Arab Emirates (UAE) after a trade agreement between the two countries in March.

UAE’s Abu Dhabi National Oil Company (ADNOC) delivered just 13 tons of ‘blue’ ammonia, made from natural-gas-produced hydrogen, as part of Aurubis’ first in a series of tests to assess the use of ammonia in production, the German company said.

The tests involve replacing 20% of the natural gas usually used in rod plants with ammonia and will take place over a period of six to eight weeks in the fall and winter of this year.

If successful, the permanent use of ammonia on an industrial scale will be tested and up to 4,000 tons of CO2 could be saved at the Aurubis plant in Hamburg, the company said.

The pilot project was put into operation in the presence of German Federal Minister for Economic Affairs and Climate Action Robert Habeck and UAE Climate Envoy and Minister for Industry and Advanced Technology His Excellency Sultan Ahmed Al Jaber, as well as Aurubis CEO Roland Harings and Hamburg’s Mayor Peter Tschentscher.

“We want our production to be climate-neutral well before 2050. Ammonia can be an important component of the hydrogen supply chain to achieve this goal,” declared Aurubis CEO Harings.

The project will include the full integration of commercial carbon capture and storage, and is a step toward a definitive agreement to expand the hydrogen supply for Nikola’s zero-emissions, heavy duty fuel cell electric vehicles (FCEVs), it said.

KeyState said it will supply Nikola with up to 100 tons a day of low carbon hydrogen which, it says,  will supply fuel for up to 2,500 FCEVs and will displace over 51 million gallons (193 million liters) of diesel fuel per year.

The over 7,000-acre KeyState site will be operational in 2026 and is expected to have the capacity to store the CO2 produced as a by-product of the hydrogen production process and will provide strategic reach to access to premium Mid-Atlantic FCEV markets, Nikola said.

The company will also produce ammonia and urea for industrial and transportation markets, it said.

“Nikola’s participation in the project will allow us to secure sufficient volumes of hydrogen to underpin and accelerate the adoption of zero-emission trucks by unlocking new customer demand and enabling key investments in downstream hydrogen refueling infrastructure in the Mid-Atlantic region,” said Nikola President, Energy, Carey Mendes.

Braya Renewable Fuels has issued a Request for Proposal (RFP) for the provision of green hydrogen as a feedstock for its refinery operations in Newfoundland and Labrador, the company said in a statement.

The RFP will look at hydrogen as a potential export commodity in the form of green ammonia for local, regional, and international markets and the company is currently repositioning its facility to produce renewable diesel and sustainable aviation fuel, it said.

The group’s production of renewable diesel uses “substantial amounts” of hydrogen as a feedstock each year and it currently uses grey hydrogen, produced from fossil fuels.

However, Braya is looking at acquiring some 35,000 tons of green hydrogen, which would make it the largest domestic green hydrogen project date, Braya said.

The RFPO was issued to solicit parties to support the development of the project and any proposals must be submitted by Dec. 19., 2022.

Shipping tanker unit of BW Group, Hafnia, and energy startup Clean Hydrogen Works (CHW) have announced a joint accord to explore the development of a new, global-scale, clean hydrogen ammonia production and export project, Hafnia said in a statement.

The expected project investment of $7.5 billion will create 350 permanent full-time jobs and production is targeted to begin by late 2027 with shipment beginning in 2028, it said.

The Ascension Clean Energy (ACE) project will be located on the West Bank of the Mississippi River in Ascension Parish, Louisiana, it said.

Hafnia is well positioned to help develop safe, sustainable, and efficient solutions to ship ACE’s clean hydrogen and ammonia to markets around the world, Hafnia said.

“Hafnia’s established track record of transporting hydrocarbons safely and sustainably around the world, as well as its stated priority to reduce carbon emissions, are fully aligned with ACE’s goals to meet the world’s growing demand for clean and affordable energy,” Chief Operating Officer of CHW Mitch Silver said.