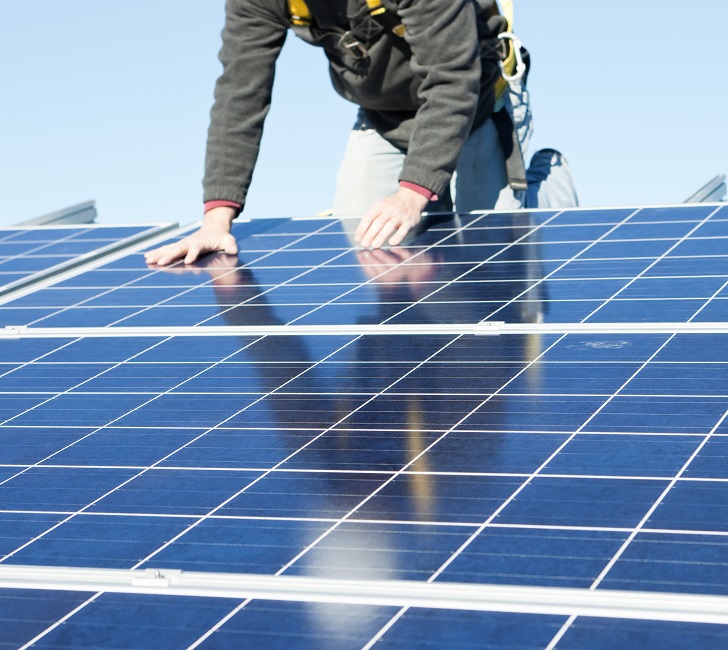 Job reductions in 2017 were acutely felt in leading solar states and demand-side operations such as installation. (Image credit: banksphotos)

US solar employment falls 3.8% in 2017 as leading states bear the brunt

After seven years of rapid growth, job numbers fell due to slower installation growth than in 2016 and uncertainty over the looming trade case for imported solar panels, the Solar Foundation said.

Last month, President Trump imposed a 30% tariff on imported crystalline-silicon solar cells and modules, which steps down by five percentage points each year to 15% in the fourth year. GTM Research predicts the new import tariffs will cut PV installations in the next five years by 11%, or 7.6 GW of capacity.

Employment in demand-side solar sectors including project development, installation and sales and distribution fell by 7,500. The manufacturing sector lost around 1,200 jobs.

Between 2012 and 2017, solar employment grew nine times faster than the overall U.S. economy

US set to unlock more federal lands for renewables projects

The U.S. Bureau of Land Management (BLM) is to consider opening up more federal desert lands in California to renewable energy development, the BLM said in a statement February 1.

The BLM has opened a 45-day public consultation on the Desert Renewable Energy Conservation Plan (DRECP), which covers an area of 10.8 million acres.

In September 2016, the BLM made available only 7% of the area for renewable energy leasing.

The BLM's announcement is a direct response to an order from President Trump to review regulations that unnecessarily impede energy development.

Executive Order 13783, “Promoting Energy Independence and Economic Growth,” directs government agencies to review all actions that could potentially burden the development or use of domestic energy sources.

“We need to reduce burdens on all domestic energy development, including solar, wind and other renewables,” Katharine MacGregor, Principal Deputy Assistant Secretary for Land and Minerals, said.

Last July, NRG Energy announced it would sell between 50% and 100% of renewables assets held by its NYLD business. The group said it would aim to raise up to $4 billion through targeted asset sales and reduce debt by $13 billion.

NYLD has a market capitalization of $3.2 billion and operating capacity of 5.1 GW, spread across wind, solar and fossil fuel assets. The portfolio has an average remaining contracted life of 16 years.

NRG’s renewables O&M business operates 2.4 GW of renewable power generation in 17 states. NRG’s renewable energy development arm has developed 630 MW of projects which are subject to a "right of first offer" from NYLD and has a total U.S. development pipeline of over 6.4 GW, according to the latest information from NRG.

"We view each of the three acquired businesses – the NYLD stake, the O&M business, and the development business – as highly complementary and well positioned to capitalize on the increasing market demand for low cost, clean energy," Adebayo Ogunlesi, Chairman and Managing Partner of GIP, said.

GIP has already invested or committed $9 billion of equity to the renewable energy sector, including 8 GW of operational renewable assets and over 14 GW of projects under construction or in development.

Since its IPO in July 2013, NYLD's cash available for distribution has risen from $91 million to $260 million while the quarterly dividend per share has climbed 150% to $1.15 per share, annualized at the end of 2017, Christopher Sotos, President and CEO of NYLD, said.

“With today’s announcement, NYLD can look forward to its next phase of growth, including solidifying near-term objectives through the most recent [new development] transactions and, most importantly, aligning with GIP, whose strategy and breadth of global investment capabilities are well suited to our business model and long-term objectives,” Sotos said.

NRG operates almost 50 GW of U.S. power generation. The company transformed from a conventional energy business into a diversified renewables and fossil fuel power generator, but its share price suffered.

Following pressure from activist investors, NRG agreed in February 2017 to conduct a strategic review of its business and examine potential asset sales.

First Solar and SunPower are to sell their joint venture yieldco, 8point3 Energy Partners, to a group of investors led by asset management group Capital Dynamics, the companies announced February 5.

The equity value of the transaction is around $937 million while the enterprise value is $1.7 billion, the solar firms said in a statement.

8point3 acquires and operates solar assets primarily developed by First Solar or Sunpower. The company had an operational capacity of 946 MW at the end of Q3 2017.

The agreement with Capital Dynamics follows talks with more than 130 potential investors.

Capital Dynamics is an independent asset manager with $15 billion in assets under management and advisement, including private equity, private credit and clean energy infrastructure.

The transaction is expected to close in the second or third fiscal quarter of 2018, pending approval by 8point3 public shareholders and federal authorities.