US solar installs to slip to 13.2 GW in 2017; Giant battery factory planned in Europe 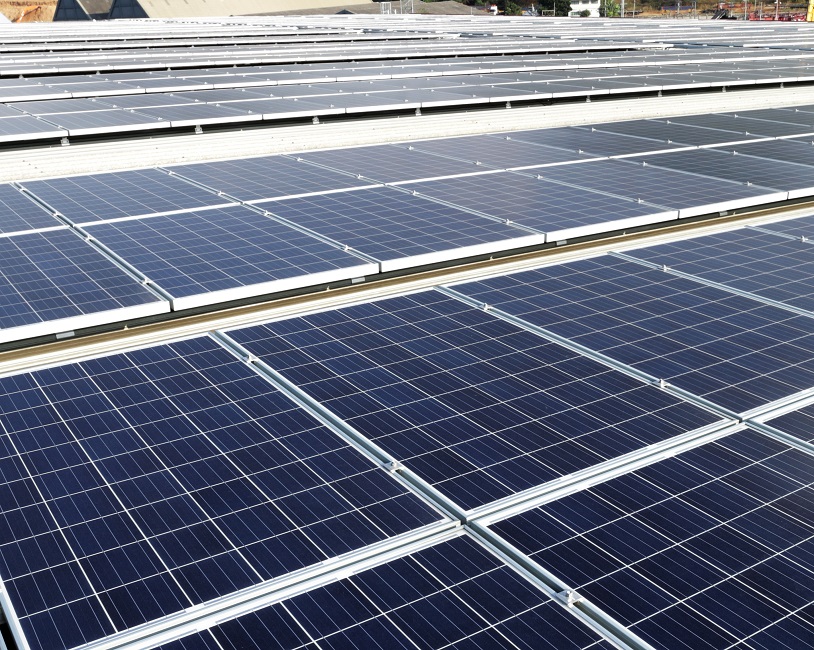 US residential installations are forecast to grow 9% in 2017 but utility-scale growth will slow. (Image credit: WichienTep)

Annual US solar installations are predicted to drop by 10% in 2017 to 13.2 GW, following a record level of 14.8 GW installed in 2016, the Solar Energy Industries Association (SEIA) and GTM Research said in a new report published March 9.

"The dip [in 2017] will occur solely in the utility-scale market, following the unprecedented number of utility-scale projects that came online in the latter half of 2016, most originally scheduled for completion before the original expiration of the federal Investment Tax Credit, which has since been extended," SEIA said in a statement.

Total installed solar capacity is now 42.4 GW and GTM Research expects the residential segment to grow 9% in 2017 and the non-residential market to grow 11%, SEIA said.

U.S. annual community solar installations are forecast to double to around 400 MW in 2017 and underpin growth in the non-residential PV market in the next five years, GTM Research said in its U.S. Community Solar Outlook 2017 report, published in February. 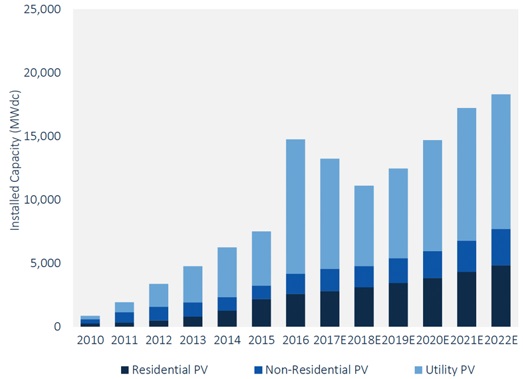 Annual installations are expected to fall further in 2018, and then pick up in 2019 through 2022, according to the forecasts by SEIA and GTM Research.

Some 79 projects were selected in the tender, which represents the first 500 MW tranche of a 3 GW solar power tender program set to run 2017 through 2019.

The projects represent a total investment of 460 million euros and the next tender is scheduled for May.

France's solar growth has been stunted by a lack of legislative support. The country installed just 576 MW of solar capacity in 2016 and installed solar capacity was 6.7 GW at the end of December, according to SER, France's renewable energy association.

Last month, the European Commission (EC) approved French tariffs which will support the construction of 2.6 GW of previously-allocated projects including 1.1 GW of utility-scale capacity.

Plants of capacity over 100 kW will receive a feed in tariff over 20 years. Developers were selected for these projects in tenders conducted between July 2011 and March 2013, the EC said.

NorthVolt, a Swedish company founded by former Tesla executives, is planning to build a 32 GWh lithium-ion battery factory in one of the Nordic countries of Europe, according to reports by the Financial Times and Bloomberg.

Northvolt is seeking to start producing lithium-ion batteries by 2020 and reach an annual production of 32 GWh by 2023, Peter Carlsson the company's founder said.

Tesla and Panasonic are currently building a giant 35 GWh battery factory in Nevada, US, but Asian companies based in Japan, South Korea and China control much of the production of battery cells for electric cars.

Northvolt's factory is expected to cost $4 billion and the company is examining sites in Scandinavia as it wants to take advantage of renewable energy sources such as hydropower and wind, as well as metals mined in the region.

The Stockholm-based company wants to raise 1 billion euros ($1.1 billion) by 2018 and Sweden’s biggest utility, Vattenfall, has agreed to invest 5 million kronor ($550,000) and has raised $14 million to date, Bloomberg reported.

NorthVolt is seeking equity investors for half the capital needed to build the factory with the rest raised through debt, according to Bloomberg.

NorthVolt is applying to the European Investment Bank for a loan and could also issue green bonds for funding, it said.

Zambia has launched the Round 3 tender process for up to 250 MW of new solar capacity, the Industrial Development Corporation (IDC) said in a statement.

The tender forms part of Zambia's 600 MW Scaliing Solar development program and developers will have until March 24 to submit expressions of interest, IDC said.

"The IDC expects that, in addition to individual companies, consortia will be formed to respond to the anticipated tender. These companies and consortia would likely comprise a mix of international, regional and local companies with expertise in developing utility scale solar PV," it said.

These include a joint 54 MW project by Neoen and First Solar, which has been awarded a 25-year power purchase agreement at a price of $60/MWh, Neoen said March 3.

"The power plant, representing an investment of $60 million, will be built and operated in partnership with the IDC, the Zambian public investment fund, and will be the first utility-scale photovoltaic power plant in the country," it said in a statement.

The IDC's Scaling Solar program is also being rolled out in Senegal, Madagascar and Ethiopia with the aim of developing some 1.2 GW of solar power capacity. The program is also expanding to other regions in Asia and Middle East.