Perovskites are shaking up the solar research world. These lead or tin-based organometal trihalides hold the promise for huge commercial gains over current solar technology. But how to move such promising materials to market? 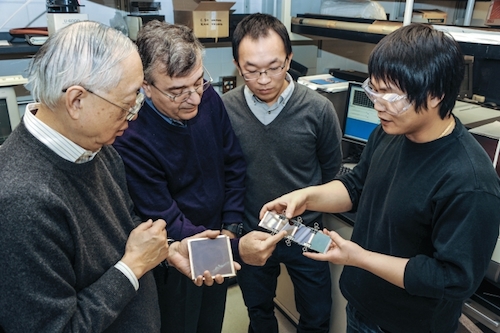 One of the few groups working with tin-based compounds is led by Mercouri...

Perovskites have been breaking efficiency records at a rate that leaves earlier solar materials in the dust. The most recent of these records was reported in April, by the Korea Research Institute of Chemical Technology, with a new record of 17.5%.

MIT Technology Review has floated potential price per watt numbers of 10 to 20 cents. This bests even the 50 cents goal of the US Department of Energy (DOE) calculates is needed to make solar competitive with non-renewables.

But according to Dr. Becca Jones-Albertus, Photovoltaics Program Manager at the DOE SunShot Initiative, it is too early to make any kind of accurate cost prediction for commercial perovskites-based solar, since the research is still at an early stage and undergoing changes.

“The structure of the best-performing perovskite solar cells has been rapidly evolving and you need some sort of standard structure in order to start talking about cost,” she explains.

“The stability of the material and the performance over time are critical and those are the things that really have not yet been investigated with perovskites,” says Jones-Albertus. “We’ll need to know the stability and reliability before we can really start talking about cost.”

And of course, efficiency is really just a matter of how much space it takes to produce an amount of energy. While key in a residential rooftop market - where space is an issue - it is not the only factor.

“When you talk about the cost of the power produced, maybe you shouldn't talk in price per watt, but in levelized cost of energy; the cost of electricity per kilowatt hour from a material,” explains Jones-Albertus. “So things like lifetime performance are the key parameters.”

Lifetime performance can only be assessed by accelerated testing to simulate the performance over 20 or 30 years, something that is not normally done at this stage. Nevertheless, the research is of great interest to SunShot, which is following the research very closely, and in May, had a researcher give an overview of work to date on perovskites at its Summit in California.

“With relatively coarse deposition methods, people have been able to hit high efficiencies, indicating that the material has strong optical absorption properties and diffusion lengths,” she says. “Researchers in the field are working with both lead and tin perovskites. The lead-based perovskites have given the better efficiencies to date.”

Because of that, most researchers are working with lead-based perovskites. One of the few groups working with tin-based compounds is led by Mercouri Kanatzidis, the Charles E. and Emma H. Morrison Professor of Chemistry of Northwestern University and Argonne National Laboratory Materials Scientist.

Unlike many researchers, Kantatzidis began by assessing the direction that commercialisation would need to take, from a sustainable market point of view.

“Lead has high toxicity and so down the road it will be hard to commercialise these things,” explains Kanatzidis. “Lead isn't going to cut it. It is not going to be accepted. So, we need non-toxic, acceptable materials. Yet it must have the efficiencies of the lead materials; currently about 16%. The theoretical limit for solar materials is close to 31%.”

Working with the equally noted Northwestern University Materials Science Professor Robert Chang, the two combined their expertise in chemistry and nanotechnology to overcome the relatively lower efficiency of tin-based perovskites.

Kanatzidis and Chang published the first paper on solid-state perovskites two years ago, which opened up a lot of followup by other researchers. The excitement about perovskites is that they are solution-deposited, so therefore you can make them “on the bench”. They do not require expensive vapour-deposition equipment.

“We focused on tin which doesn't have these toxicity problems, but it is a little bit more problematic to work with. And this is where our skills in being chemists and knowing how to handle all these more problematic materials came to bear, and we were able to make a solar cell that actually works and that's what we published.”

Decades versus a few years

Kanatzidis’ excitement is palpable. He compares the speed of the efficiency gains his team has made to the history with crystalline silicon or thin film efficiency. “Those took decades, maybe 20 years or more. The thin films also took 20 years or more to reach 16 or 17%. These perovskites did it in two years!”

“That's why people are excited about it, and they are anticipating getting at least 20% and higher efficiency,” he says.

The results bode well for their future commercial success in the marketplace. However Jones-Albertus points out that the true test of marketability will be how perovskite-based cells compete on price with the dominant technology on the market.

And what is the level of interest by the solar industry in perovskites research?

“I could tell you,” deadpans one industry insider (who wanted to remain anonymous). “But then I’d have to kill you.”

On that note, readers will have to make their own assumptions, but remaining alert to any new developments in this space.