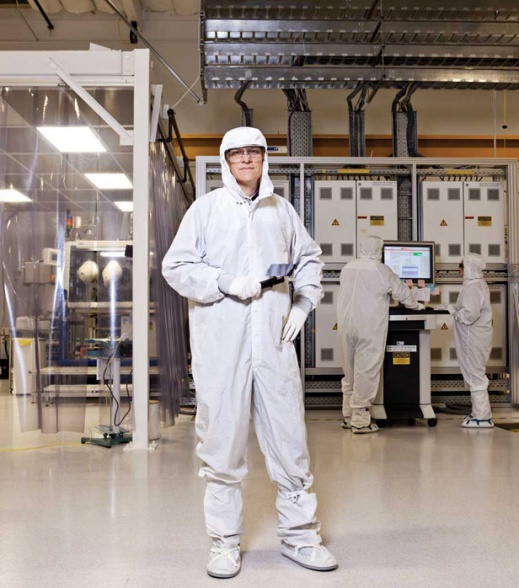 Thin film solar specialist Hanergy Holding Group has completed the acquisition of Alta Devices, whose thin film solar technology has a conversion efficiency of 30.8%, the highest among the solar energy technologies currently available in the world.

Both companies’ R&D teams will join forces to further develop Alta Devices’ technology to serve the mobile and wearable tech market with reliable, high-efficiency solar-power solutions and applications. The acquisition will build on Hanergy’s continuous efforts in recent years to enhance thin-film solar innovation, and improve the efficiency and applicability of clean energy through the integration of world-leading thin-film solar technologies.

In particular, Hanergy plans to actively expand the application of Alta Devices’ products in various mobile power application areas, ranging from emergency charging of mobile phones, to the automotive sector and the Internet of Things.

Chairman and CEO of Hanergy, Li Hejun said, “Alta Devices’ thin film solar technology allows more energy to be produced in lower light conditions than any other type of solar cell, giving it greater potential to power a wide range of mobile devices and equipment from phones to cars. It has the potential to change the way solar energy is used. This acquisition advances Hanergy’s goal to become the world leader in the solar technology of the future.”

Chris Norris, President and CEO of Alta Devices, said, “This successful acquisition is built upon Alta Devices’ and Hanergy’s shared belief that flexible, thin-film solar technology represents the future of the solar industry. The combination of our world-class solar cell R&D capability and Hanergy’s technology, research and capital resources will help us further improve the performance of our technology, increase production capacity and expand applications.”

Alta Devices’ use of gallium arsenide (GaAs) allows its dual- and single-junction solar cells to produce record-breaking conversion efficiencies of 30.8% and 28.8% respectively, as certified by the U.S. National Renewable Energy Laboratory (NREL).

Following the acquisition, Alta Devices will continue to operate independently as a wholly-owned subsidiary of Hanergy. Hanergy will also work with Alta Devices to develop international markets and enhance its cooperation with key strategic customers.

The record has been documented in the US Department of Energy's National Renewable Energy Laboratory (NREL) Best Research Cell Efficiencies reference chart.

This certified result bests the previous CdTe record of 20.4 percent conversion efficiency, which was set by First Solar in February of 2014, and represents the seventh substantial update to CdTe record efficiency since 2011. The achievement also places First Solar's CdTe research cell efficiency above copper indium gallium diselenide based solar cells (CIGS) at 20.9 percent, and well above multicrystalline silicon (mSi), which peaked at 20.4 percent in 2004.

"We have just begun to reveal the true unrealized potential of CdTe PV," said Raffi Garabedian, First Solar's Chief Technology Officer. "Our Advanced Research team continues to deliver extraordinary results by creating practical devices capable of commercial scale production. Not only have we have now demonstrated the highest single junction thin film cell on record, but just as important, our record cells are based on the same scalable manufacturing processes and commodity materials that we have proven through years of volume production."

First Solar has signed an agreement to provide engineering, procurement and construction (EPC) services for the 52.5 megawatt (MWAC) Shams Ma'an photovoltaic (PV) power plant, in the Hashemite Kingdom of Jordan. The company has also finalized a long-term operations and maintenance (O&M) contract for the project.

First Solar significantly contributed to the development of the project, which successfully secured a 20-year Power Purchase Agreement (PPA) with the National Electric Power Company (NEPCO), the country's power generation and distribution authority. First Solar co-developed the project with Jordan's Kawar Group, and as part of its commitment to supporting additional foreign investment in the country's renewable energy sector, it elected to divest its stake to a consortium of investors consisting of Diamond Generating Europe Ltd., a subsidiary of the Mitsubishi Corporation; Nebras Power Q.S.C., a subsidiary of the Qatar Electricity & Water Company; and the Kawar Group. The terms of the sale were not disclosed.

"Shams Ma'an has already established a new benchmark for the independent production of renewable energy in the region, demonstrating how the selection of the right technology and service providers creates considerable value, which, in turn, helps attract experienced institutional investors," said Ahmed S. Nada, Vice President for the Middle East at First Solar.

The power plant - which will be the largest photovoltaic (PV) facility in the Middle East - is an important component in Jordan's strategic diversification of its generation portfolio, which is intended to boost energy security.

Part of the ambitious Ma'an Development Area (MDA) initiative in southern Jordan, the project will generate an estimated 500 jobs during its construction, which is expected to begin in early 2015. When it is completed, in 2016, the facility will supply an estimated 160 million kilowatt hours (kWh) of electricity per year, which is equivalent to approximately one percent of Jordan's annual energy output.

"Underscoring the fact that what matters to Jordan is the amount of energy produced, every aspect of the project has been optimized for low-cost, high-energy performance in actual conditions. For instance, our advanced thin film modules will yield up to eight percent more energy than an array or plant of the same power output rating using silicon-based modules, due to the high temperatures onsite. Additionally, the First Solar Tracker will allow the plant to generate over 20 percent more energy than a fixed mounting system," said Matthew Merfert, First Solar's Technical Director for the Middle East.

Shams Ma'an is First Solar's second utility-scale project in the Middle East; it successfully engineered and constructed the 13MWDC first phase of the Mohammed bin Rashid Al Maktoum Solar Park in Dubai, currently the largest solar PV plant in the region. The multi-award-winning project was connected to the emirate's grid in October 2013, 195 days after breaking ground.

US-based SoloPower Systems, which designs, manufactures and deploys copper indium gallium diselenide (CIGS) flexible thin-film solar technology, is collaborating with the US Photovoltaic Manufacturing Consortium (PVMC) - an industry-led collaboration headquartered at the College of Nanoscale Science and Engineering (CNSE) of the State University of New York (SUNY) in Albany,-- as a strategic technology partner. Under the agreement, PVMC will provide specialized technology services to SoloPower Systems to develop thin-film solar.

Created as part of the US Department of Energy’s SunShot Initiative, PVMC has experience in roll-to-roll CIGS PV technology, in both research laboratory and industrial production environments. Since CIGS-based thin-film uses layers just a few microns thick, the materials can be deposited on solid or flexible lightweight substrates, offering capabilities that are more versatile than traditional solar panels. The technology could also prove to be more cost-effective to produce in high volume, SoloPower says.

“Our collaboration with PVMC will accelerate the commercial manufacturing ramp-up at Systems’ factory in Portland, and will further support the continuing advancement of our products,” says SoloPower’s chief technology officer Chris Eberspacher.

“We welcome SoloPower to the consortium, where they will be able to tap into advanced solar energy research and expertise to enable high-tech innovation, which continues to be fuelled by New York Governor Andrew Cuomo’s commitment to developing next-generation, clean energy technologies,” he adds.

Thomas said that AGL has already invested over $3bn in renewable energy generation in Australia and with projects like the Nyngan Solar Plant, is increasing the proportion of zero carbon emission generation in the National Electricity Market.

AGL will construct the Nyngan Solar Plant along with the 53 MW Broken Hill Solar Plant with $166.7m funding from ARENA and $64.9m from the NSW Government. The two plants are being developed in partnership with local councils, local communities, and First Solar.

The cost to build both solar plants is $440m with Nyngan representing $290m. First Solar is providing engineering, procurement and construction (EPC) services for both projects and will maintain the plants during the first five years of operation.

Jack Curtis, First Solar’s Regional Vice President for Asia Pacific, said local procurement is accounting for over 55 percent of total procurement spending on the Nyngan project, which demonstrates that the benefits of projects such as this are shared not only locally but regionally and nationally.

“When you consider that there are already over 150 multi-skilled construction jobs on the site itself, it reinforces the fact that utility-scale solar farms not only provide Australia with clean energy but also with sustainable job opportunities across the sector,” said Curtis.

“Over this same time period it is anticipated around $137m will flow into the regional economy through employment and direct maintenance service requirements such as plant and infrastructure upgrades,” Thomas explained.

The Nyngan Solar Plant is expected to be completed by June 2015. The Broken Hill Solar Plant began construction earlier this month, with an estimated completion date of November 2015.

Scientists from the University of Liverpool have discovered that the highly toxic cadmium chloride can be replaced using an ingredient which is cheap and innocuous enough to be employed in the manufacture of food products, such as soy milk and tofu.

The team of researchers, led by physicist Jon Major, scoured the periodic table for salts which could be used to make cheaper and safer coating powders, yet discovered that many of them, such as sodium chloride, failed to work because their ions interfere with the electronic structure of the devices, according to media reports.

According to a report by Sourceable.net, the researchers discovered that magnesium chloride was an ideal fit for the production process, resulting in a cell with an efficiency level almost on par with those manufactured using cadmium chloride.

According to Major, the cells made using magnum chloride are “as good as anything we’ve ever made with cadmium chloride,” yet can be safely applied in an open environment, using an instrument as simple as an inexpensive spray coater procured online.

The discovery could bolster the prospects of the thin film solar sector, which has been hampered significantly by the rise of China as a low-cost manufacturer of photovoltaic cells.