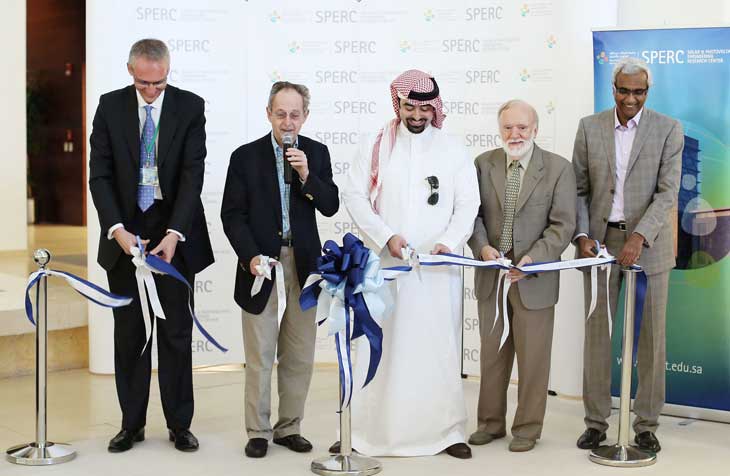 The Centre for Solar Energy and Hydrogen Research Baden-Württemberg (ZSW) and King Abdullah University of Science and Technology (KAUST) in Thuwal, Saudi Arabia, have joined forces to drive the development of thin-film technology.

KAUST President Jean-Lou Chameau and Prof. Michael Powalla, ZSW board member and Head of the Photovoltaics division, agreed to this alliance at an international workshop for thin-film solar cells held recently in Thuwal.

The memorandum of understanding signed by ZSW and KAUST includes an initial term of five years for collaboration in thin-film photovoltaic technology. It will include an exchange program for scientists and students, the sharing of knowledge and publications, and joint events and R&D projects.

Saudi Arabia plans to have 16 gigawatts of peak photovoltaic capacity installed by 2030 as part of a Renewable Energy Programme. In addition to generating electricity from solar power, this program calls for solar thermal, wind, geothermal and waste-to-energy power generation capacities and R&D capabilities to be developed further, as well as for collaboration with renewable energy experts from abroad.

Sweden’s Midsummer, a supplier of production lines for manufacturing flexible thin film CIGS solar cells, increased revenues by 192 per cent in 2013 compared to 2012, according to the company's financial report that was made public today. Revenues increased from 14.9mSEK to 43.5mSEK with a profit of more than 10mSEK.

“Fewer large solar energy parks are being built in Europe. Instead, focus is moving to installations on large buildings in cities. The lightweight and flexible thin film solar cells are ideal for this use. It is economically and environmentally more beneficial to use solar energy locally, where it is produced," he said.

Named on several occasions as Sweden's hottest technology company and the fastest growing cleantech company in the EMEA region in 2007-2011 (Fast 500, Deloitte), the business was running profitable save for 2012 when it made a loss. The company made a comeback in 2013 with a profit on a little over 10mSEK on revenues of 43.5mSEK. Revenues were up 192 per cent from last year.

The plant is expected to create approximately 40 local jobs and is evidence of First Solar’s commitment to supporting Australian manufacturers. IXL also received support from the Automotive New Markets Program (ANMP) to assist with the capital expenditure required to establish the plant. The ANMP is jointly funded by the Commonwealth and Victorian Governments, and delivered in collaboration with the South Australian Government to assist automotive suppliers to diversify their customer base and product range.

"As the solar industry continues to grow in Australia, there will be an increasing need and demand for a reliable and efficient local supplier base,” said Jack Curtis, First Solar’s Vice President of Business Development for Asia Pacific.

“Continued utilisation of local suppliers will not only reduce the cost of delivering solar power to Australia, but it will also create local jobs, develop regional skills and support more sustainable employment.

“Local procurement accounts for 56.3 per cent of First Solar’s total procurement spending on the Nyngan and Broken Hill projects, with over 450 direct construction jobs expected to be created and over $66m spent on local equipment for both projects,” said Curtis.

First Solar reported for first quarter of 2014 net sales were $950m in the quarter, an increase of $182m from the fourth quarter of 2013. The sequential increase in net sales is primarily attributable to achieving revenue recognition on its Campo Verde project, said First Solar.